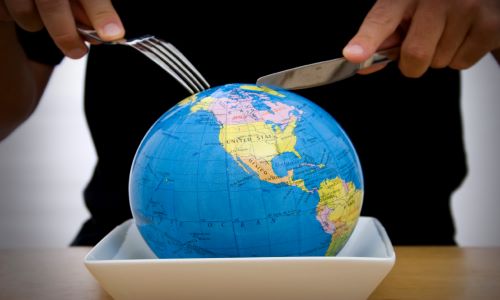 By Michael Snyder/Economic Collapse Blog October 18, 2022
Share this article:
I am trying to sound the alarm about this as loudly as I can.  The global food crisis just continues to intensify, and things are going to get really bad in 2023.
As you will see below, two-thirds of European fertilizer production has already been shut down, currency problems are causing massive headaches for poor nations that need to import food, global weather patterns continue to be completely crazy, and the bird flu is killing millions upon millions of chickens and turkeys all over the planet.
On top of everything else, the war in Ukraine is going to restrict the flow of agricultural and fertilizer exports from that part of the world for a long time to come, because there is no end to the war in sight.  In essence, we are facing a "perfect storm" for global food production, and that "perfect storm" is only going to get worse in the months ahead.

Global hunger has been on the rise for years, and the UN World Food Program is warning that we are heading for "yet another year of record hunger"...
The world is at risk of yet another year of record hunger as the global food crisis continues to drive yet more people into worsening levels of severe hunger, warns the United Nations World Food Programme (WFP) in a call for urgent action to address the root causes of today's crisis ahead of World Food Day on October 16.
The global food crisis is a confluence of competing crises - caused by climate shocks, conflict and economic pressures - that has pushed the number of severely hungry people around the world from 282 million to 345 million in just the first months of 2022. The U.N. World Food Programme scaled up food assistance targets to reach a record 153 million people in 2022, and by mid-year had already delivered assistance to 111.2 million people.
But as I have consistently warned, this is only just the beginning.
Eventually, there will be billions of people that don't have enough to eat on a regular basis.
In all my years, I have never seen hunger spread so rapidly.  In fact, there are large numbers of people that are now facing starvation in the backyard of the United States...
The United Nations is warning that hunger in one of Haiti's biggest slums is at catastrophic levels, as gang violence and economic crises push the country to "breaking point".
Nearly 20,000 people in the capital's impoverished Cité Soleil area have dangerously little access to food and could face starvation, the UN says,
Across Haiti, almost five million are struggling with malnutrition.
"Haiti is facing a humanitarian catastrophe," a top UN official said.
But most people in the western world won't care until they are going hungry themselves.
Unfortunately, that day may be a lot closer than a lot of people ever imagined.

Right now, a whopping two-thirds of all fertilizer production capacity in Europe has already been shut down because of the skyrocketing price of natural gas...
Europe's fertilizer crunch is deepening with more than two-thirds of production capacity halted by soaring gas costs, threatening farmers and consumers far beyond the region's borders.
Russia's squeeze on gas shipments in the wake of Moscow's invasion of Ukraine is hurting industries across Europe. But fertilizer companies are being especially affected because gas is both a key feedstock and a source of power for the sector.
There simply will not be enough fertilizer for European farmers in 2023.
And there won't be enough for everyone else that depends on fertilizer production from Europe.
This is a really big deal, because without fertilizer we would only be able to feed approximately half the planet.
Do you want to volunteer to be among those that don't get enough food?
Meanwhile, the surging U.S. dollar is causing immense headaches for food importers all over the world...
In Ghana, importers are warning about shortages in the run up to Christmas. Thousands of containers loaded with food recently piled up at ports in Pakistan, while private bakers in Egypt raised bread prices after some flour mills ran out of wheat because it was stranded at customs.
Around the world, countries that rely on food imports are grappling with a destructive combination of high interest rates, a soaring dollar and elevated commodity prices, eroding their power to pay for goods that are typically priced in the greenback. Dwindling foreign-currency reserves in many cases has reduced access to dollars, and banks are slow in releasing payments.
The value of the U.S. dollar has been spiking because the Federal Reserve has been raising interest rates.
When the value of the dollar goes up, poor countries have to pay a lot more for food in their own local currencies.
So the Federal Reserve is actually making the global food crisis worse by hiking rates.
But they are going to keep doing it anyway.
At the same time, global weather patterns continue to go completely haywire.