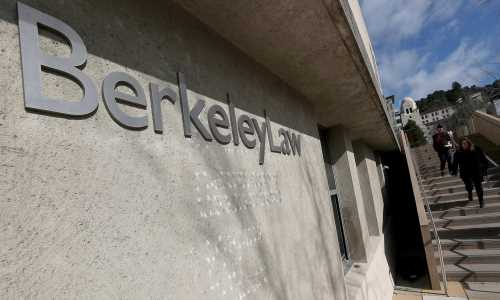 By Richard Cravatts/JNS.org October 27, 2022
Share this article:
When Law Students for Justice in Palestine (LSJP) at University of California, Berkeley, School of Law promoted a bylaw that would create what critics have characterized as "no-go zones for Jews," it may not have anticipated the thunderous and widespread denunciation it has since experienced for its toxic and radical tactic to marginalize and alienate Zionists and Jews on campus.
"LSJP is so excited to announce that multiple student affinity groups and clubs at Berkeley Law have adopted a pro-Palestine bylaw divesting all funds from institutions and companies complicit in the occupation of Palestine, and banning future use of funds towards such companies!" the group wrote in an Instagram post in August. "LSJP is calling ALL student organizations at Berkeley Law to take an anti-racist and anti-settler colonial stand and adopt the bylaw into their constitutions ASAP!"
In addition to urging the student groups to commit to supporting the ongoing BDS campaign against Israel, the bylaw also included very troubling language that seeks to expunge any speech by individuals who might be considered pro-Israel or pro-Zionist, especially speech meant to correct the many factual and historical inaccuracies in the pro-Palestinian narrative inherent in this insidious bylaw.

"In the interest of protecting the safety and welfare of Palestinian students on campus," the suggested language read, groups who adopt this bylaw "will not invite speakers that have expressed and continued to hold views or host/sponsor/promote events in support of Zionism, the apartheid state of Israel, and the occupation of Palestine."
And in language which is Orwellian in its attempt to paint bigotry as virtue, cooperating student groups, the bylaw read, will proclaim that they are "publicly stipulating the organization's position of anti-racism and anti-settler colonialism to speakers, ensuring that proposals for speakers emphasize the organization's desire for equality and inclusion," all of this for the purpose, of course, of creating "a safe and inclusive space for Palestinian students and students that are in the support of the liberation of Palestine."
The implementation of what amounts to a litmus test of ideological allegiance--only targeted at Jews who support Israel--is grotesque but part of a decades-old campaign to malign Israel and transform it into a pariah state, while excluding its supporters from progressive groups because Israel, it is falsely alleged, is an apartheid, racist regime of white supremacy that continues to oppress innocent brown Arabs who were the actual indigenous residents of the land now called Israel.

For all the talk of a Palestinian state and Jewish state, "two states living side by side in peace," the actual intent of the anti-Israel campaign is to weaken and destroy Israel completely and to silence the Jewish state's supporters on university campuses.
The Berkeley situation is just the latest of a continuing pattern of demonizing and maligning Zionism, Israel, and Jews in the name of Palestinian self-determination. Thus, the frequent calls for the "liberation of Palestine" or chants of "From the River to the Sea, Palestine will be free" articulate a fantasy in which present-day Israel is subsumed by returning millions of Arabs, purging all of its Jews and creating a 23rd Arab state in its place.
In the case of the Israeli-Palestinian debate, which forecloses on any speech that defends Israel and answers back to the lies, distortions, and slanders apparent in the language of the LSJP bylaw, the suppression of pro-Israel speech is even more serious.
Pro-Palestinian activists would prefer that their rancid ideology is never challenged, of course, particularly since so much of their anti-Israel narrative is based on the oft-repeated but counter-factual references to the "occupation of Palestine," Israeli "apartheid," "colonialism," "genocide" and the oppression of an Arab people at the hands of Jews. But emboldened by their success in promoting this false narrative, activists began attacking Zionism--Jewish self-determination--itself and other organizations, and programs associated with Judaism itself.
At the University of Toronto, for instance, the school's Graduate Students' Union (UTGSU) has the dubious distinction of being the only student union in Canada with a committee dedicated solely to promoting the anti-Semitic BDS movement. More outrageously, in 2019 the union members rejected Hillel's request to recognize the "Kosher Forward" campaign to have kosher food offered on campus since, as the Union decided in their grotesquely anti-Semitic way, Hillel is pro-Israel and therefore kosher food should not be allowed.
What is next for the purge of anyone who might be considered pro-Israel? No Jews allowed in cafeterias that use SodaStream products? The removal of Jewish names from endowed professorships or campus buildings if those benefactors supported Israel? Will "Open Hillel" centers--those renegade Hillels which allow pro-Palestinian, anti-Israel dialogue and events to take place in their spaces--be allowed to remain on campuses but conventional, pro-Israel Hillels not?