Top China Watcher: Why Is U.S. Not Reacting As Beijing Prepares For War? 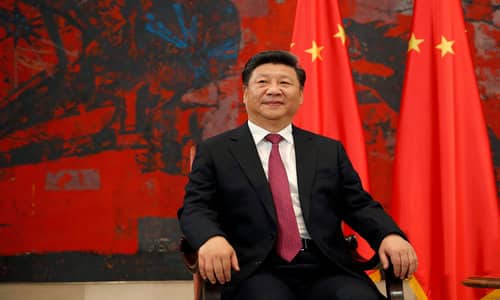 By Art Moore/WND News Center October 28, 2022
Share this article:
Chinese President Xi Jinping's securing of an unprecedented third term as the Communist Party's general secretary, his packing of the Politburo with with loyalists and dramatic removal of his predecessor, Hu Jintao, during the National People's Congress are ominous signs, warns China scholar Gordon Chang.
"The Chinese despot is pushing the region - and the world - toward war, and we are now far closer to conflict than many once thought," he wrote in a column for The Hill,
Another China watcher, Jacob Helberg, pointed out Wednesday on Twitter that the New York Times is reporting a Chinese spy chief has joined the Chinese Communist Party's top ranks for the first time.
"Is it me, or does this new Politburo look a lot like a wartime team?" wrote Helberg, a senior adviser at the Stanford University Center on Geopolitics and Technology. "Or maybe it's just Xi bringing up 'security' 89 times in his speech."
Commenting on the tweet, Chang affirmed Xi is "assembling a team to go to war."
"Why are we not making defensive preparations?" he asked of the United States.

In his column for The Hill, Chang said Xi's report opening the party's 20th National Congress on Oct. 16 "revealed his dark vision of the future."
Noting Xi warned of "dangerous storms" ahead, Chang pointed out that back in March, the Chinese central government declared in its report to the National People's Congress that it is committed to "resolving the Taiwan question in the new era."
The "new era" is language Xi began using last November, and it followed his declaration in 2019 that the Taiwan "problem" should not be allowed "to be passed down from one generation to the next," observed Chang.
"New era," therefore, he said, appears to mean the period of Xi's rule.
"He has, unfortunately, made the destruction of the island's democracy a test of his legitimacy," wrote Chang.

Xi, in his speech Oct. 16, declared: "The wheels of history are rolling on toward China's reunification and the rejuvenation of the Chinese nation. Complete reunification of our country must be realized, and it can, without doubt, be realized!"
Meanwhile, Chang noted many U.S. military planners, including Gen. Mark Milley, have assumed an attack on Taiwan would not come any sooner than 2027.
But a top Navy admiral, arguing that Beijing has carried out nearly everything it has promised, warned China could invade Taiwan this year.
"It's not just what President Xi Jinping says, but it's how the Chinese behave and what they do, and what we've seen over the past 20 years is that they have delivered on every promise they've made earlier than they said they were going to deliver on it," said Adm. Mike Gilday, the chief of U.S. Naval Operations.
A strongman like Mao
Chang said Xi's apparent timeframe "matters because he has, since taking power in late 2012, changed the Chinese regime so that he can do what he wants."
"He has done away with the party's institutional restraints and now is, like Mao Zedong but unlike his two immediate predecessors, a strongman."

Another internal political development of great concern, Chang said, is that Xi came to power without a political base. The Chinese leader has since made certain generals and admirals the core of his political support, which has "helped push China in a far more belligerent direction because he has empowered the most hostile and combative elements in the country."
Further, a troubling, practical result of his power grab is that he has no one to blame for his mistakes but himself, increasing the cost of losing political struggles.
"These two trends mean that his threshold of risk is far lower than most Americans think it is," Chang said. "Xi is the author of policies - economic, disease-control, social and external - that many recognize as disastrous.
"Therefore, he needs a win, and he has made taking Taiwan his critical test."
The Chinese leader, Chang concluded, is "insecure, vulnerable, powerful and belligerent."
"He told the world [Oct. 16] that the international outlook is grim. This means China has never been more dangerous."
This story was originally published by the WND News Center - reposted with permission.