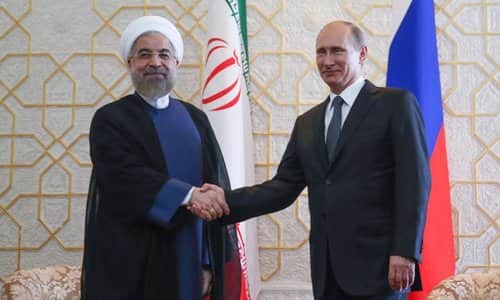 By Majid Rafizadeh/Gatestone Institute November 02, 2022
Share this article:
Thanks to the Biden administration's leadership, or remarkable lack thereof, the ruling mullahs of Iran have become a key player in Russia's invasion of Ukraine. The Iranian regime and Russia are ratcheting up their military cooperation and adventurism.
On March 2, Iran abstained from the United Nations General Assembly Resolution ES-11/1 condemning Russia's invasion and demanding Moscow's withdrawal from Ukraine. Tehran then voted against UN General Assembly Resolution ES-11/3, which suspended Russia's membership in the UN Human Rights Council.
The Biden administration and the European Union, all the same, continued negotiating with the ruling mullahs to revive the toxic Iran "nuclear deal" and lift the sanctions in place against the Islamic Republic.

Russia and Iran, evidently further emboldened and empowered, then organized a visit by Russian President Vladimir Putin to the Islamic Republic, where he received huge support for Moscow's invasion of Ukraine from the Iranian regime's Supreme Leader Ayatollah Ali Khamenei.
After that visit, Iran's supplying of kamikaze drones to Russia became the first instance seen of military cooperation between Moscow and Tehran.
On September 23, the Ukrainian foreign ministry stripped Iran's ambassador in Kyiv of his accreditation and reduced the embassy's diplomatic staff there, according to the Ukrainian foreign ministry's press service. Despite this escalation, the European Union would not admit that the Iranian regime was entrenched in the war on Ukraine: EU foreign policy chief Josep Borrell wanted "proof".
"We will look for concrete evidence about the participation of Iran in the Ukraine war", he told reporters as he arrived for a meeting of EU foreign ministers in Luxembourg on October 17.
The EU ultimately acknowledged that the Iranian regime was indeed "providing military support for Russia's unprovoked and unjustified war of aggression against Ukraine" via "development and delivery of Unmanned Aerial Vehicles to Russia".
"These cowardly drone strikes," British Foreign Secretary James Cleverly noted in a statement, "are an act of desperation. By enabling these strikes, these individuals and a manufacturer have caused the people of Ukraine untold suffering."

Iran's regime, apparently even more emboldened, then began sending troops to Crimea to assist Russia in its attacks on Ukraine's infrastructure and civilian population and to increase the effectiveness of the suicide drones.
The White House actually admitted on October 20, 2022 that it had evidence that Iranian troops were "directly engaged on the ground" in Crimea supporting Russian drone attacks. "The systems themselves were suffering failures and not performing to the standards that apparently the customers expected," National Security Council spokesperson John Kirby acknowledged. "So the Iranians decided to move in some trainers and some technical support to help the Russians use them with better lethality."
Now the Iranian regime, presumably even more emboldened, will be providing ballistic missile to Russia in addition to the drones. Iran's regime has the largest and most diverse ballistic missile arsenal in the Middle East.
"Ukraine currently doesn't have effective air defense systems against ballistic missiles," Ukraine Air Force spokesman Yuriy Ihnat pleaded. "Iran will likely supply those (to Russia), unless the world finds a way to stop it".
There is still clearly a need in Ukraine to "close the sky," a request that Speaker of the US House of Representatives Nancy Pelosi rejected.
Several top Iranian generals are directly involved in the war against Ukraine; they most likely received their orders from the Supreme Leader. Major-General Mohammad Hossein Bagheri, who is the Chief of Staff of Iran's Armed Forces and supervises Iran's military Unmanned Aerial Vehicle (UAV) program, is a key player in Iran's military cooperation with Moscow.

He is "involved in the expansion of Iranian-made UAVs abroad; in this capacity, he inaugurated an assembly line in Tajikistan destined for the export of Ababil-2 drones. He also participated in the development of Mohajer-6 drones and their supply to the Russian Federation for their use in the war of aggression against Ukraine."
Also Brigadier-General Saeed Aghajani, who is the Commander of the Islamic Revolutionary Guard Corps's Aerospace Force Unmanned Aerial Vehicle "oversees and directs the planning, equipment and training for Iran's UAV operations, which include also the supply of drones to international allies of Iran, including the Russian Federation".
General Sayed Hojatollah Qureishi, in charge of the Supply, Research, and Industrial Affairs Division at the Iranian Ministry of Defense and Armed Forces Logistics (MODAFL), was behind "negotiating the agreement with the Russian Federation in relation to the supply of Iranian-made Unmanned Aerial Vehicles (UAVs) for their use in the war of aggression against Ukraine."
So, because of the Biden administration, the new "Axis of Evil," Russia and Iran, are becoming more empowered and emboldened than ever. It is now time to abandon the "nuclear deal" with Iran permanently, "close the sky" over Ukraine, and quickly defeat Putin. At least it will show the other aggressors there is no way they can win.
Originally published at Gatestone Institute - reposted with permission.