Most Younger Americans Say There Is No 'Absolute Truth' 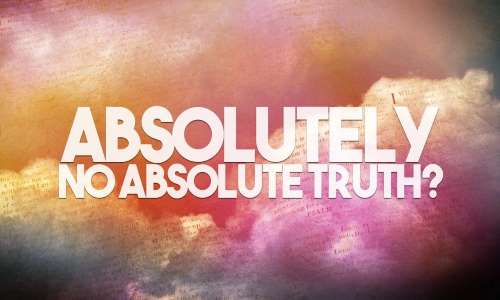 By Bob Unruh - WND News Center November 02, 2022
Share this article:
Merriam-Webster of late says "truth" is "the body of real things, events, and facts: actuality," and "the state of being the case: Fact."
But a new poll shows that a majority of younger Americans simply don't believe it.
They believe that each person defines his or her own truth.
A poll from Summit.org, working with McLaughlin and Associates, surveyed 1,000 likely general election voters nationwide October 12-17.

Its results pushed American past the "tipping point."
Because 55% of Americans 18-29 think "each person determines their own version of truth."
That opinion also was held by those in other age groups, but the percentage diminished as people got older.
Does 'absolute truth' exist?
For those ages 30-40, 46% believe each person can pick the truth they like, for those 41-55 it was 35%, for those 56-65 it was 31% and for those over 65, it was 32%.
"The number of Americans who say there is no absolute truth is alarmingly high. But among young adults, we have now officially passed the tipping point. The majority of youth now say that each person determines their own version of truth," explained Jeff Myers, president of Summit.org.

"The loss of truth has grave consequences for community, justice, a sense of purpose, and mental health. I'm not aware of any civilization that has abandoned reality to this extent and survived. The good news is that Americans still hold out hope that each person can make a difference. If there ever was a time to stand for truth, it is now."
The poll confirms a margin of error of plus or minus 3.1%.
The poll said overall, 60% of American voters who expressed an opinion on the issue said there is absolute truth, while four in 10 said every one can pick whatever they want to be truth.
The poll also said 81% "of American voters who expressed an opinion on the issue believe that one person standing for their beliefs in a time of crisis has the power to bring change."
Originally published at WND News Center - reposted with permission.