The Return Of Netanyahu & Religious Zionism 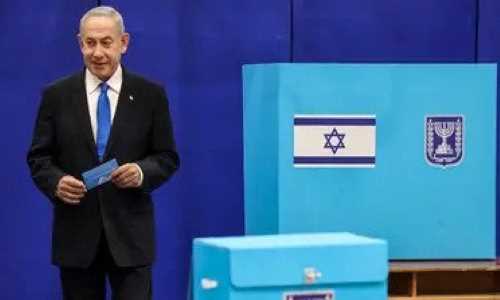 By Alex Traiman/JNS.org November 02, 2022
Share this article:
Israel's initial election exit poll results are in, and former Prime Minister Benjamin Netanyahu remains the most dominant force in Israeli politics by a significant margin. In addition to securing the most Knesset seats (at least 30), his supporting right-wing bloc, which also includes three religious parties, exceeded pre-election surveys
If the exit polls hold true, Netanyahu has a clear path to forming a right-wing government and returning to power. Albeit with a narrow majority, a right-wing alliance would likely represent the most stable coalition alignment with the greatest possibility of lasting a full term.
However, the key is whether the exit polls hold true. In previous election cycles, Knesset mandates shifted during the manual counting of Israel's paper ballots, and election night celebrations quickly turned into harsher reality.

Israelis do not vote directly for their prime minister. They also do not vote directly for their parliamentarians. Israelis go to the voting booths and select the party they want to represent them in the Knesset. Once the seats are divided among the parties that cross a minimum voter threshold, it is the parliamentarians themselves who select the prime minister.
If just one or two seats shift during the count from parties in the pro-Netanyahu bloc towards parties in the anti-Netanyahu bloc, the former premier will find his path back to Balfour Street blocked once again.
Furthermore, if the small Arab party Balad, which failed to cross the minimum voter threshold according to exit polls, squeezes across in the final counting, the entire election results will shift out of Netanyahu's favor. According to election procedures, making it across the 3.25 percent vote threshold means four mandates. Failing to cross the threshold means zero mandates. If Balad jumps from zero to four, Netanyahu would find himself below the 61 mandates he needs to form a government.
If the exit poll results hold, Netanyahu will likely form a government together with the two traditionally Orthodox parties: Shas, representing the Sefardic communities, and United Torah Judaism, representing the Ashkenazi communities. In addition, Netanyahu will sit with Religious Zionism, led by Bezalel Smotrich and far-right political firebrand Itamar Ben-Gvir.

The rise of the Religious Zionism Party is one of the major stories of this fifth election cycle in 43 months. According to the exit polls, the technical bloc of three smaller nationalist parties soared to 14 or 15 seats, an all-time high for the right-wing flank of the Israeli electorate.
With Religious Zionism emerging as the third-largest party by a comfortable margin, Netanyahu will have every justification to form a government with a right-wing party that supports his candidacy over centrist and left-leaning parties that oppose his return to the premiership.
Though the final count may shift in favor of the left wing over the next 48-hours, Yair Lapid and Benny Gantz appear to be the losers of the election. Lapid's progressive Yesh Atid Party received fewer votes than polls indicated in the run-up to the election.  Yesh Atid did not close the gap on Likud and position itself as a ruling party. And the results indicate that current Defense Minister Gantz, who was Netanyahu's primary challenger in previous election cycles, is no longer viewed as a viable candidate for prime minister.
If Netanyahu does emerge as prime minister, it will vindicate his determination to remain at the head of the Likud Party, despite four previous inconclusive elections. The election results demonstrate that more Israelis prefer Netanyahu than any other candidate for prime minister.

The next 48 hours will provide definitive election results. At that point, Netanyahu will either be celebrating an improbable return to the prime ministership for a third tenure (after previous stints of 2.5 and 12.5 years), or continuing in a bitter fight to save his political career.
If Netanyahu ultimately fails to secure 61 seats in the legislature, Israel's political circus is likely to continue. Current interim Prime Minister Yair Lapid does not appear to have a clear path to a stable coalition regardless of whether or not Netanyahu's path is blocked. Gantz may attempt to position himself as an alternative candidate that can bring together disparate ideological parties.
And if neither Netanyahu, Lapid nor Gantz finds a natural path to 61, either difficult political compromises will need to be reached, or Israel may well find itself careening toward an unthinkable sixth election-albeit no more unthinkable than elections two, three, four or five.
It will only be after each and every vote is counted that Israel's political direction will become clear. And depending on the results, it may be weeks or months before a government will be formed.
The exit polls look very good for Netanyahu. Shifts in his favor could secure him four more years in office. Shifts against him could send Israel back into a dreaded cycle of political uncertainty.
Originally published at JNS.org - reposted with permission.