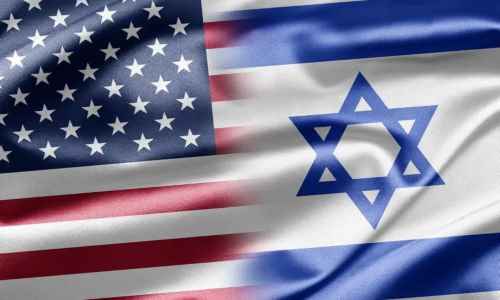 By Jonathan Tobin/JNS.org November 05, 2022
Share this article:
As far as many American Jews are concerned, this time the Israelis have gone too far. After more than four decades of tolerating, with decreasing patience and growing disdain, Israeli governments that were led by the Likud Party, the results of this week's Knesset election go beyond the pale for a lot of liberals.
Their angst is not so much focused on the return to power of Benjamin Netanyahu for his third stint as the Jewish state's prime minister, even though he is widely viewed by many Jewish Democrats as the moral equivalent of a red-state Republican.
The panic about the election results is caused by the fact that the Religious Zionist Party and its leaders, Bezalel Smotrich and Itamar Ben-Gvir, will play a leading role in the next governing coalition. The party won 14 seats, making it the third largest in the Knesset and an indispensable part of the majority that Netanyahu is about to assemble.
The prospect of Smotrich, and especially Ben-Gvir, sitting in Netanyahu's Cabinet has not just set off a bout of pearl-clutching on the part of liberal Jewish groups. It's also led to the sort of ominous rhetoric describing a crack-up of the relationship between American and Israeli Jews that goes beyond the usual rumblings about the growing distance between the two communities.

There are legitimate questions to be posed about Smotrich and Ben-Gvir. Time will tell whether they are up to the challenge of their new responsibilities and act in a manner that helps, rather than hurts, Netanyahu's efforts to consolidate support for his government at home and abroad. But what no one seems to be considering is whether the rush to judgment about them says more about Diaspora Jewry's obsessions than it does about the embrace of nationalist and religious parties by Israel's voters.
The pair are the embodiment of everything that most American Jews don't like about the Jewish state. Their unapologetic nationalism and perceived hostility to Arabs, gays and non-Orthodox Judaism are anathema to liberal Americans.
But the interesting thing about the statements coming out of groups like the Anti-Defamation League, the American Jewish Committee and more unabashedly leftist organizations is the way they highlight their worries about the new Israeli government by pointing to the supposed threat that the Religious Zionist Party poses to Israeli democracy.
Do Smotrich and Ben-Gvir really oppose democracy?
The talk about democracy is a red flag that there's something going on in this discussion above and beyond the real issues that do separate American and Israeli Jews.
Whatever one may think of Smotrich and Ben-Gvir, they are not agitating for abandoning a system through which Israel's government is chosen by democratic elections or pushing for one in which the rule of law does not prevail.
The plank of their platform that has generated the most heat from critics--judicial reform--is actually a defense of democracy, not an attempt to overturn it. It would bring a degree of democratic accountability to a system in which judges have arrogated to themselves the right to overturn laws passed by the Knesset, without reference to any legal principles but their personal ideas about what they think is good for the country.

In his youth, Ben-Gvir was a supporter of Rabbi Meir Kahane and his belief in expelling Arabs from the Jewish state. But he has abandoned that cause.
His defense of Jewish rights and emphasis on the threat from Arab terrorist violence is not to the taste of those who prize rhetoric about promoting coexistence. Yet that doesn't make him a foe of democracy.
Nor is the opposition on the part of many, if not most, Israelis to the effort by the left to make the country an essentially non-sectarian state, rather than an avowedly Jewish one. This sense--that Israel should prioritize the mission of promoting Jewish peoplehood--has fueled support for all of the parties in Netanyahu's coalition.
Zionism and Jewish nationalism are not antithetical to democracy. On the contrary, they are an expression of a basic democratic value that prizes the right to self-determination by all peoples, including Jews.
The root cause of American-Jewish alienation from Israel has little to do with politics. It is a function of the decline in a sense of Jewish peoplehood among a rapidly assimilating population, with the largest growing sector labeled by demographers as "Jews of no religion."
And if Jews don't care about being Jewish, they aren't going to be inclined to support Israel, no matter who is in its government.
What, then, is behind the talk about democracy's being threatened, or the use of the terms "Jewish supremacist" and "fascist" to describe Ben-Gvir and the voters who have made his party a kingmaker in Israeli politics?
Within Israel, there is a long tradition on the left, dating back to the pre-state era, of demonizing right-wing opponents. But the alarm bells being rung by American Jews about Israeli democracy has little, or nothing, to do with the never-ending laments from leftist former ruling elites about the right-wing, religious and Mizrachi Jews who have largely dominated the country's politics since Menachem Begin and the Likud first defeated the Labor Party in 1977.
An extension of the red v. blue divide
Instead, it is an echo of the themes that increasingly roiled American politics in the Trump era.
Former President Donald Trump has been treated by liberals as a threat to democracy ever since he announced his first presidential run in 2015. Fueled by the myth that he stole the 2016 election by colluding with Russia, this attitude became set in stone in the minds of Democrats after the disgraceful Capitol riot on Jan. 6, 2021.
As Americans prepare to vote in the midterm elections, the loudest talking point from President Joe Biden and his party as they attempt to defend their congressional majorities is the notion that it's not just Trump who's a "semi-fascist," "election denier" and "foe of democracy;" it's his supporters, as well.

The fact that the same "election denier" label can be applied to Democrats who didn't accept the legitimacy of the 2016 election undermines that narrative. But this demonization of the right--and the conviction on both ends of the political divide that the other side is comprised of tyrants bent on silencing their rivals--is now the touchstone of American discourse.
Liberal Jewish groups have adopted this rhetoric and made it their own. Indeed, the ADL has confirmed its shift from a non-partisan group tasked with defending Jews against anti-Semitism to just another generic advocacy group that embraces the "war on democracy" narrative. Its convening of a post-midterms conference whose headline speakers feature liberal ideologues and Never Trumpers, while continuing to pretend that it is still politically neutral, is a brazen example.
So, for American liberals to focus so much on the democracy argument is a dead giveaway that what is at work here is neither a normal expression of the cultural clash between Americans and Israelis nor one among Jewish tribes. Rather, it is an extension of the tribal culture war that animates U.S. politics.
A misleading comparison
The anger about Netanyahu and his allies is driven by a growing belief on the part of many liberals that Israelis are on the other side of the great political divide that is tearing apart the United States. What they miss is that the facile comparisons between the GOP and the Likud/Religious Zionists tell us little about the very different issues that both countries face.
At a moment in history when politics plays the same role that religion used to occupy in the lives of most Americans, it's hardly surprising that liberal Jews view Israel's electoral strife as an extension of what is happening in the United States. But their use of the "war on democracy" battle cry to delegitimize Israelis in the same way that they do Republicans is both wrongheaded and can undermine the already frayed ties between the two nations.
The outrage Smotrich and Ben-Gvir are generating in the United States has as much, if not more, to do with American issues than it does with those that divide Israelis. Those who wish to bring the Americans and Israelis together need to focus every bit as much on getting the former to view the latter's leaders without the distortions of red-blue antagonisms as they are on the actual points of contention between two different Jewish tribes.
Originally published at JNS.org - reposted with permission.