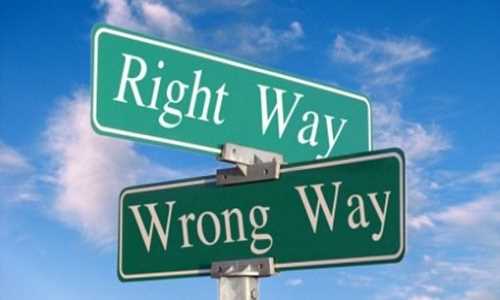 By Marjorie Jackson/The Washington Stand November 12, 2022
Share this article:
"The laws of the land are replacing the laws of God in determining good and evil in America."
Dr. George Barna, a senior fellow with Family Research Council's Center for Biblical Worldview, conducted research through the Cultural Research Center at Arizona Christian University exploring what Americans believe about morality. From a sampling of 2,275 respondents, Barna aimed to answer this question: How do people decide what is right versus what is wrong?
The study maintains that, until recently, the principles found in the Bible had been commonly accepted as the basis for morality. From there, most Americans drew "traditional moral values." Now, while a majority (89%) claim to uphold the latter, they draw from different moral authorities, rather than just Scripture. Previous research by Barna found that only 6% of Americans have a biblical worldview, though many claim to have one.

Respondents were asked to specify what they believe defines right and wrong from three options: "what you feel in your heart" (42%), majority rule (29%), or the morality taught in the Bible (29%). Just under half of those who claim "traditional moral values" hold to biblical morality, making it a minority opinion. David Closson, director of FRC's Center for Biblical Worldview, helped put these terms in perspective, telling The Washington Stand that biblical morality aligns with the teachings of Scripture.
He told TWS that the majority opinion -- defining -- is unbiblical. "Christians have never thought that [one's heart] is the arbitrator of what is right, what is wrong, what is truth," he told The Washington Stand. "We know that we live in a Genesis 3 post-fall world where we know that our heart can be deceitful. Our heart is wicked." He alluded to Jeremiah 17:9, reading, "The heart is deceitful above all things, and desperately sick; who can understand it?"
"The idea that we can trust our intuition, that we can trust our feelings to tell us what objective, moral right and wrong is, is misguided," he continued. "You have to take every thought captive to God's word. This is what the Bible teaches. This is what the church has taught for centuries."

With the Bible taking a backseat to people and human institutions as moral arbiters, Closson says that postmodernism has become the prevailing viewpoint. "Postmodernism denies the idea that we can know anything definitively," he told TWS. Another Barna study from 2021 similarly found that most American adults believe in moral relativism.
"What this survey generally shows is how postmodern ideas have become mainstream," he outlined. "You'll hear phrases like 'my truth' or 'your truth,' but there's no such... There's only the truth. And I think that the Barna survey is showing that -- although a lot of people like the phrase 'traditional moral values' -- when we actually try to define what those moral values are, that's where we have a huge shift that's taking place."
Closson says that a postmodernist worldview will only help tear the nation further apart in disunity. "We're not going to be able to agree on what is right or wrong ... what good public policy is ... what is good for our neighbors and for our friends, if there are these competing notions of truth that continue to tear us apart," he told TWS.

In a a world dominated by a predominately postmodern worldview, in which fewer Americans than ever before believe that the Bible is God's Word, Barna noted in his study that these findings have great implications in who Americans look to for definition of morality. According to him, it even changes the way people vote for president, because many have blurred the lines with a pastoral office. In his words, "The laws of the land are replacing the laws of God in determining good and evil in America."
"Americans have become comfortable with the idea of being the arbiters of morality," he noted. "In the same way that most Americans contend that there is no absolute moral truth, they now believe that there is no divine guidance required or even available to define right and wrong."
Barna's writing continued, "The research indicates that people are now more likely to take their moral cues from government laws and policies than from church teachings about biblical principles."
Closson says that pastors have a role in equipping their congregations to discern right from wrong. "Pastors have one primary responsibility, which is to preach the word and disciple the flock. And if pastors do that ... they're going to be framing the conscience, the moral intuitions and the outlook that their people have on the world."
"I think an emphasis ... on God's word and the teaching of the Bible," he emphasized, "that is going to shape minds, hearts, and consciousness to understand what God's perspective on right and wrong is."
Originally published at The Washington Stand - reposted with permission.