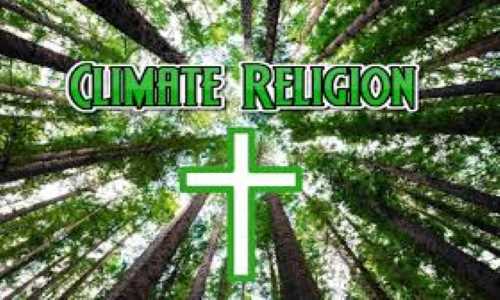 By Ben Johnson/The Washington Stand November 16, 2022
Share this article:
Dawn broke crisp and clear over Mount Sinai on Sunday morning, as half a dozen climate activists gathered to adorn their cause with religious overtones. They chose the site based on its proximity to COP27, a global climate summit now underway at Sinai coastal resort Sharm El-Sheikh, but once chosen they couldn't resist conscious parallels to Moses receiving the Old Covenant.
Organizer Yosef Abramowitz, a solar energy CEO who stands to profit from a global commitment to green energy, was convinced he had received a heavenly sign to "proceed with the climate covenant, the 10 climate commandments." Participants took turns reading out the "commandments" -- or rather, "principles," more like guidelines than actual rules -- before Abramowitz smashed two stone tablets on the ground, in clear imitation of the prophet Moses.
Yet the imitation lacked the weightiness of the original. In this ceremony was no "blazing fire and darkness and gloom and a tempest and the sound of a trumpet and a voice whose words made the hearers beg that no further messages be spoken to them" (Hebrews 12:18-19). Once so holy that Moses must walk unshod (Exodus 3:5), the mountain is ordinary, if ruggedly beautiful without the manifest presence of God; these activists needed not, and did not, bother to remove their shoes.

The tablets for smashing were "already a little bit broken," cracked into several pieces. The commandments were not chiseled into stone by the finger of God (Exodus 31:18) but "written in handwriting" on a paper notepad. For a group so overtly appropriating religious symbolism, they treated the whole affair far too lightly.
That was only the beginning of the inconsistencies. The authors of the climate principles couldn't even make it through one without usurping God's authority for mankind. Climate Principle 1 states, "Creation is not our possession. We are grateful for God's gifts and the gift of life itself [so far, so good]. Taking our rightful place as a partner and co-creator, we recognize our human responsibility to love and protect the natural world."
They must have missed the part where it says, "In six days the Lord made heaven and earth, the sea, and all that is in them, and rested on the seventh day" (Exodus 20:11). If someone can invent his own organisms and matter out of nothing, then he can claim co-creator status. Not to mention the implication that, as God's "partner," we aren't required to keep his commandments. Not only does this principle rob God of all his authority, but it claims it is "our rightful place" to do so.

Climate Principle 2 is worse, if that's possible. "Nature is permeated by God's presence and being, by the spiritual, manifesting ultimate reality in every particle. We must treat all life with reverence and awe." That could pass as a textbook definition of a class of worldviews known as "panentheism." It is quite distinct and incompatible with the Bible's teaching that God is a personal, spiritual being.
As the Ten Commandments begin, "And God spoke all these words, saying, 'I am the Lord your God, who brought you out of the land of Egypt, out of the house of slavery'" (Exodus 20:1-2). Either God has a personal relationship with his people and accomplishes their salvation through distinct acts, or he permeates all of nature as a mystical reality. Both cannot be true.
These first two principles combine radically unbiblical teachings with relatively biblical ethical implications. We are God's stewards of everything he has given us. We should care about other creatures and the natural world. But we must reach neither conclusion by making ourselves equal with God or degrading his character.
In retrospect, the opening song of the semi-religious ceremony portended the theological anarchy to follow. Jewish and Christian participants (who disagree most profoundly about whether Jesus is or is not "the Christ, the Son of the living God" (Matthew 16:16) joined in the agnostic dirge, "Hallelujah" -- not the chorus, but the pop song.

A third noteworthy statement is Climate Principle 4, which states, "Humanity's task is to nurture and serve life, to resist the temptation to greed, arrogance, exploitation, waste, and harm. We recognize human responsibility for the well-being of all life today, and for future generations." It's curious that they have replaced the responsibility for "father and mother" from the fifth commandment, which conveys a promise of living long in the land, with a responsibility "for future generations."
The well-being of future generations is too great a burden for man "for he does not know what is to be, for who can tell him how it will be?" Everything we work for, we "must leave it to the man who will come after me, and who knows whether he will be wise or a fool?" (Ecclesiastes 8:7, 2:18-19). It's difficult to recognize the wisdom in replacing God's instructions with their own.
The rest of the principles rely on vague platitudes from "we are all part of a greater, interdependent whole" to "act mindfully." Taken together, they communicate the notion that humanity is only an insignificant but potentially destructive part of a vast ecosystem. There is little, if any recognition, that only mankind possesses the dignity of being created in God's own image and being tasked with rightful dominion to "fill the earth and subdue it" (Genesis 1:26, 28).
When God delivered the Ten Commandments, he spoke with all the authority of the omnipotent, sovereign Creator, who had just humiliated and destroyed the ancient world's superpower and its entire pantheon. "You shall" or "you shall not," he ordered. The people trembled in fear and agreed to obey (Exodus 20:18, 24:7). So, when Moses smashed the stone tablets on which God had written the words of the covenant, it signaled the Lord's just wrath towards them for violating the covenant.
When the Ten Climate Principles were delivered, it authors could muster no authority over others. "We must," was its not-very-imperative form. Interfaith climate activists have used at least three other sets of "ten climate principles" this week. "We look down to Sharm el-Sheikh and we're not satisfied," said Abramowitz. In contrast, the eternally happy God declares, "my counsel shall stand, and I will accomplish all my purpose" (Isaiah 46:10).
The climate activists did get one thing right: COP27 is unlikely to yield the drastic, international policy alterations activists demand (Abramowitz declared himself dissatisfied with the 2015 Paris Climate Agreement). Egyptian sources have confirmed that 400 private jets have arrived at Sharm el-Sheikh for the conference -- hardly a sign of deep, ideological commitment from the attendees.
One major obstacle, as Abramowitz has noted, is that countries like Iran, Saudi Arabia, India, and China will block or water down language requiring too much renunciation of fossil fuels. Without their cooperation, the ambitious targets he seeks will be mathematically impossible to meet (that's why President Joe Biden is lobbying China on climate change, not genocide). But in keeping with the climate movements religious fervor, Abramowitz is hoping for a miracle.
Originally published at The Washington Stand - reposted with permission.