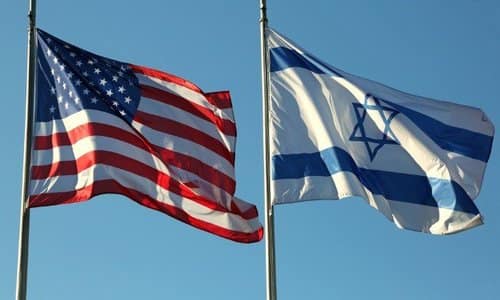 By Melanie Phillips/JNS.org November 18, 2022
Share this article:
Can Israel break its dependency on the United States?
The question has always been widely dismissed as unthinkable. But recent events are prompting it to be raised with increasing urgency.
The administration of U.S. President Joe Biden has been far from friendly towards Israel. Despite continuing to fund its defense needs and support it against the relentless malice of the U.N., the Bidenites' reckless appeasement of the Iranian regime has increased the Islamic republic's capacity to attack Israel. At the same time, the U.S. has repeatedly pressured Jerusalem to make dangerous concessions to the Palestinian Arabs.
The administration's latest move, however, is an act of naked hostility.

Last May, Shireen Abu Akleh, a Palestinian-American journalist, was killed in Jenin. She was standing among Palestinian Islamic Jihad terrorists who were involved in a fierce gun battle with IDF soldiers, who were conducting anti-terror raids following a series of murderous attacks on Israeli citizens.
Right from the start, the Biden administration tried to lay the blame for Abu Akleh's death on Israel despite a lack of evidence that this was the case. Outrageously, it even demanded that the IDF change its rules of engagement, which would have hobbled its ability to protect its own people.
An investigation conducted by the IDF produced an inconclusive result, since the bullet alleged to have killed Abu Akleh was found to be badly damaged when it was finally handed over by the Palestinian Authority.
Nonetheless, Israel said it was most likely that Abu Akleh was killed by an IDF bullet that went astray. If it thought this openness would lay the matter to rest, it was very much mistaken. This week, the FBI announced it was launching a fresh investigation into the killing.
There is no decent reason for such a move. The Americans themselves inspected the bullet and said it was too damaged to permit any conclusion. The motivation for this new probe is either malice or political pressure, or both.
There has been intense pressure on the administration from Abu Akleh's family to conduct an investigation, as well as from Democratic members of Congress such as Sen. Robert Menendez (D-N.J.) and Sen. Cory Booker (D-N.J.).
Sen. Ted Cruz (R-Tex.) pushed back with a blistering statement accusing the administration of "weaponizing" the Department of Justice against Israel. He said, "Joe Biden and his administration view Israel and Prime Minister-elect Benjamin Netanyahu as political enemies, and so they are responding to them the way they respond to all their political enemies: by unleashing the FBI."
Of course, this is hardly the first time there have been tensions between Israel and the U.S. Israel went through eight terrible years with former President Barack Obama, whose agenda of empowering Israel's enemies and undermining its security is serving as the template for the Biden administration. Various other presidents were also hostile to Israel and the Jewish people.

Now, however, America is beginning to act against Israel in a more fundamental way. There has been a volcanic eruption over the possibility that, in Israel, the leaders of the Religious Zionist Party--the rabble-rouser Itamar Ben Gvir and the religiously ultra-conservative Bezalel Smotrich--might become ministers in the government being assembled by Netanyahu.
Sen. Menendez, who has a reputation as a friend of Israel, recently warned Netanyahu that if he heads a coalition including Ben-Gvir and Smotrich, the U.S.-Israel relationship will be badly affected.
More painfully, the American Jewish community is increasingly pulling away from Israel and even turning against it. The rise of Ben-Gvir and Smotrich is providing such American Jews with a way to launder their visceral rejection of Jewish nationhood.
In The New York Times, journalist Thomas Friedman claimed that such an Israeli government would turn American Jews and other friends of Israel against the Jewish state.
Friedman is not only generally venomous towards Israel but has often proved to be out of touch with reality. Nevertheless, his views reflect those held by a considerable swath of American Jews.
However, the implication that Israel is beholden to American Jews for approval is as arrogant and offensive as the FBI inquiry.
Portraying Israel's coalition--which hasn't even been established yet--as some kind of neo-fascist specter serves as cover for a process that's going on anyway. These American Jews are rushing to declare Israel a lost cause because they have already decided to lose it.
The American Jewish community's turn towards apathy or hostility to Israel has nothing to do with whether Netanyahu is prime minister or Ben-Gvir and Smotrich are in his government. It's because the community's support for Israel is demonstrably shallow and eroding in tandem with the number of American Jews who are turning away from Judaism itself.

That's why, at a conference on Israel-U.S. relations this week in Tel Aviv, American law professor Alan Dershowitz said, "The future Israel-American relationship is in grave danger." If nothing is done to change current trends, he asserted, "Israel must prepare to go it alone without the support of the U.S., and it must adopt a doomsday strategy in relation to U.S.-Israeli relations."
Dershowitz, along with several other speakers who warned that American attitudes to Israel now pose a security risk, was talking principally about attitudes on the left. Of course, the real support base for Israel in America remains its large population of evangelical Christians. But support there is beginning to fray too, especially among the young.
Israel has long wanted to break away from dependency on the U.S. But could it be done?
Conventional wisdom says not. When America's 10-year military assistance package ends in 2028, Israel will have received $170 billion in U.S. military aid, most of it since the 1973 Yom Kippur War.
Israel depends on the U.S. for its defense. American assistance accounts for fully 40% of the overall IDF budget. This gives the U.S. leverage over Israel. But that leverage has been weakening.
Israel began working towards military autonomy as long ago as the 1990s. The chilly attitude of the George H.W. Bush administration and the perceived American failure to stop Iraqi missiles from striking Israel convinced Israeli leaders that they couldn't count on American backing forever.
Israel's situation now is very different. It has made peace and strengthened alliances with a number of neighboring states that were formerly its foes.
Once reliant on American arms transfers, Israel now produces many of its most essential weapons domestically. In 1981, American aid was equivalent to almost 10% of Israel's economy. As a result of Israel's long economic boom, in 2020 it was closer to 1%.
Given the deep changes in American society and within its Jewish community--particularly the steady encroachment of anti-Western, anti-Jewish and anti-Israel feeling among the young--Israel cannot afford not to plan more actively for a drastic lessening of U.S. support.
Unquestionably, as things currently stand, any immediate lessening of U.S. military aid would be extremely difficult. Moreover, the importance of American support doesn't reside primarily in funding Israel's defense. It lies in the overall relationship between the two countries, including joint strategic planning, missile defense, joint exercises, an implicit security guarantee and the U.S. veto at the U.N. Security Council, which has repeatedly prevented sanctions on Israel.
Dependency, however, is not all one way. America needs Israel--and it will need it more and more. It's not just that Israel is America's beachhead and intelligence arm in the Middle East against the enemies of the West. In many respects, Israel--with its strong economy, high birthrate and unshakeable commitment to defend the nation--has become far stronger than America, where all those features are fast eroding.
The real question may not be whether Israel can survive without support from the United States, but whether the United States itself can survive at all.
Originally published at JNS.org - reposted with permission