'An Atmosphere Of Lawlessness': Attacks On Churches Nearly Triple In 4 Years 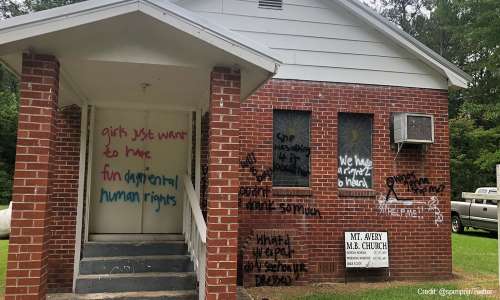 By Ben Johnson/The Washington Stand December 19, 2022
Share this article:
A Christian leader has blasted the Biden administration for "creating an atmosphere of lawlessness" by ignoring attacks on churches and houses of worship nationwide, which have nearly tripled over the last four years, according to a startling new report.
These assaults ranged from deadly to defacing, covered every region of the country and denominational background, and often sprang from pro-abortion domestic terrorism or other forms of left-wing enmity against biblical morality.
Offenders committed at least 420 acts of hostility against 397 separate churches in the United States between January 2018 and September 2022. These cases include everything from arson and gun-related violence to vandalism and bomb threats, the copiously documented, 84-page report specifies.
The attacks show the comprehensive nature of anti-Christian violence. Assaults against churches occurred in 45 states and the nation's capital, Washington, D.C. Victimized congregations span the theological gamut from evangelical, Roman Catholic, Eastern Orthodox, mainline Protestant, non-denominational churches, and Seventh-Day Adventist. Assailants targeted parishes primarily attended by white, black, and Asian (specifically Korean and Taiwanese) Christians, as well as multiethnic congregations.

The report documents one homicide, numerous arsons, bomb threats (real and fake), and a pervasive desecration of holy items. Vandals regularly smashed crosses, statues, and headstones in cemeteries; vandalized carvings of the Ten Commandments; set fire to a Nativity scene; and smeared feces on a statue of the Virgin Mary.
They tore up a Bible and desecrated an American flag in a Primitive Methodist church in Wilkes-Barre, Pennsylvania. Denver's Assumption of the Blessed Virgin Mary Catholic Church suffered two drive-by shootings this August. Smashed windows and spray-painted doors became ubiquitous. The number of assaults peaked this May through July but has remained elevated compared to historical figures, which usually number in the single digits.
Each individual act of violence or vandalism could cause tens of thousands of dollars in damage to the local congregation.
The annual pace of hostilities against churches, the author warns, is only increasing. "The first nine months of 2022 saw more than double the number of reported acts of hostility against churches that occurred in the entirety of 2018," notes Arielle Del Turco, assistant director of the Center for Religious Liberty at Family Research Council.
The spike in anti-Christian hate crimes cannot be dismissed as an anomaly of one report, since the FBI counted 240 anti-Christian hate crimes in 2021, up from 172 in 2018.
The report found these destructive, often-violent assaults against houses of worship are often precipitated by political upheaval, typically on the Left.
"Within the past few years especially, outpourings of political anger have sometimes correlated with vandalism and other acts against churches," says Del Turco. "When faced with such blatant violence and disrespect against churches (and religion more broadly), our response must be to condemn these acts and reaffirm the right of all people to worship and live out their faith freely--including the freedom to live without fear that they will be the next target of such an attack."

The report cites two major motivators: the still-unsolved leak of the Supreme Court's Dobbs ruling overturning Roe v. Wade on May 2 and the "Black Lives Matter" riots over the killing of George Floyd in the summer of 2020. But radical pro-LGBTQ activism, support for COVID-19 church closures, secularism, Satanism, Islamic fundamentalism, and anti-Americanism also wrought havoc in parishes nationwide.
Abortion: By far the most destructive of these was liberal opposition to the Christian Church's 2,000-year history of opposition to abortion, which reached a fever pitch after the Dobbs leak.
In the first nine months of 2022, pro-abortion extremists carried out at least 57 attacks against Christian houses of worship--an 1,140% increase over the past four years. Between 2018 and 2021, only five abortion-related attacks took place against churches, with zero in 2018.
Days after the Dobbs leak, vandals covered a Roman Catholic church and school in Armada, Michigan, with Satanic symbols and "messages calling for the death of Republicans." The same week, protesters spray-painted pro-abortion messages on the doors of Holy Rosary Catholic Church in Houston, interrupted Mass in Los Angeles dressed as characters out of "The Handmaid's Tale," and harassed a Franciscan friar at a Basilica in New York City.
Rep. Chris Smith, R-N.J., co-chair of the bipartisan Congressional Pro-Life Caucus, accused abortion radicals of waging "a kind of war on the advocates for life" on "Washington Watch with Tony Perkins" in June.
Black Lives Matter/Canadian Schools 'Mass Grave' Hoax: The report found that 10 church attacks emanated from riots precipitated by the Black Lives Matter movement. This September, vandals wrote "Kill MAGA/Pigs," BLM," and "Antifa" on a Unitarian-Universalist building in California.
A Roman Catholic Church in Los Angeles was spray-painted with the words "Kill all cops" and "Make America pay for its crimes against Black lives." Rioters defaced another Catholic parish while protesting the shooting of Jacob Blake in Kenosha, Wisconsin, in August 2020. In all, anti-Christian vandalism tied to BLM spread across the world, as far as Poland.
Another 11 attacks against U.S. churches had to do with reports of decade-old abuse of tribal children by church-run schools in Canada, which caused a rash of church desecrations in that nation. Despite multiple excavations, proof of the alleged "mass graves" was never found, and not a single corpse ever materialized.
Pro-LGBTQ Vandalism of Churches: Christian churches have also suffered over their belief in biblical morality about sexual relations, especially homosexuality and transgenderism.