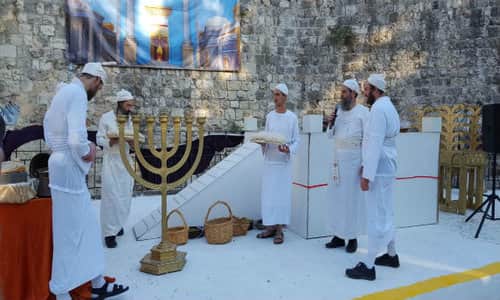 By Adam Eliyahu Berkowitz/Israel 365 News January 05, 2023
Share this article:
In the wake of National Security Minister Itamar Ben Gvir ascending to the Temple Mount to commemorate the Tenth of Tevet on Tuesday, the Return to the Mount activist group petitioned the minister to permit the Biblical Passover offering at Judaism's holiest site.
Rafael Morris, the head of Return to the Mount, told Israel365 News that there is actually strong grassroots support for reinstating the Passover offering on the Temple Mount.
"We have lots of people, private and even in the government, that support this quietly but who are scared to say so in public," Morris said. "And there's no reason why we shouldn't do it."
Morris pointed to the exponential growth in the number of Jews ascending to the Temple Mount.
"One hundred years ago, it would have been crazy and an incitement of the Arabs to talk about a Jewish state in Israel," Morris said."Eighty years ago it was a crazy incitement to talk about Jews praying at the Kotel (Western Wall) or Hebron. The Korban Pesach (Passover sacrifice) is a Biblical commandment the Jewish people perform for thousands of years in Jerusalem. It is the most normal thing."
"Where we are today, to bring the Passover sacrifice is quite a small step," Morris said.

Morris emphasized that this "small step" is necessary and must necessarily be on the Temple Mount.
"The only place Jews can perform the hundreds of commandments described in the Torah is on the Temple Mount," he said. "It is not our most holy site. It is our only holy site. Without the Temple Mount, we cannot be Torah Jews."
"Not bringing the Korban Pesach (Passover offering) carries the punishment of Karet, the most severe punishment described in the Bible. And since King David consecrated the Temple Mount 3,000 years ago, the Temple Mount has been the heart of Judaism and the only place we can perform these mitzvot."
Morris emphasized that the Passover offering is essentially intended to prepare the animal to be consumed in a respectful manner.
"Few people criticize the Samaritans who carry out the same ritual every year that they learned from us," Morris said. "People come from all over the world to see it."
Morris explained that the entire Temple Mount movement was once considered fringe in Israeli society but is becoming more mainstream.
"Ten years ago, the Temple reenactments were described in the Israeli media as extremist incitement carried out by a bunch of crazies," Morris said. "The police and municipal authorities used to complain when we applied for permits. Now they come to us and ask us when we are going to apply."
"The Temple events are considered a positive cultural contribution and people are more willing to admit that Arab threats of violence are what shouldn't be tolerated."

He added that the opposition to Ben Gvir visiting the Temple Mount is explicitly racist.
"This is a human rights issue but it is more than that," Morris said. "The people who oppose Jews going to the Temple Mount also oppose Jews living in Tel Aviv. It is the same thing. If we don't have the right to be Jews on the Temple Mount, we don't have any right to be here."
Morris said that if given the okay by the government, everything is in place to jump-start the Biblical ritual.
"We have everything we need and we have been practicing for over a decade but we still don't really know all the questions," he said. "Mitzvot are practical and the actual performance is part of the learning process. Before we returned to Israel, we really had no clue how to practically perform Shemittah (agricultural sabbatical ) and we are still working on it. We are much better prepared for the Passover offering and what we don't know, the rabbis and Kohanim (priests) will work on."
Printed below is the petition from the organization:
Monday, January 2, 2023
To the right honorable
MK Itamar Ben Gvir
Minister of National Security
Re: Passover sacrifice of 2023
Greetings,
As you know, we, the "Return to the Mountain" movement, have been engaged for the last decade in activities concerning the issues of the Temple Mount and the Temple, and one of the main subjects we deal with is the offering of the Passover sacrifice in our days.
Every year we make many efforts to promote the Passover sacrifice both on the conceptual-educational level and on the practical level. Every year we try to offer the sacrifice in its place and time.

In past years, several applications were submitted to the Israel Police in order to fulfill the commandment in an approved and coordinated manner.
The importance of the Passover sacrifice is well known to you from your past activities, but nevertheless, it is important to note that this is a positive commandment, the abstention of which carries the punishment of karet - spiritual death, something that otherwise exists only in the mitzvah of circumcision - a mitzvah of the people of Israel have given their lives for generations to preserve this important mitzvah.
This year, in light of the political situation and the establishment of a "fully right-wing" government for the first time in a long time, there is an actual possibility that the offering of the Passover sacrifice will be carried out by a large group of Jews in a dignified, approved and permitted manner, authorized by all the various factors, first and foremost by the Israel Police, which is under your authority as the new Minister of National Security of the State of Israel.
We hereby address you with an update and a request, an update that this coming Wednesday (January 4, 2023) we will submit a request to the Israel Police for holding the event, and with the request that you act with all the powers given to you by virtue of your new position to approve this request as soon as possible so that we can organize at all levels (logistic, halachic, bureaucratic and others) as soon as possible.
There is a golden opportunity to return the crown to its former glory and to renew the Passover sacrifice for the first time in about two thousand years, a move that will advance the Geulah, Redemption, immediately and will be recorded in the pages of history as the beginning of the building of the third Temple.
Best regards,
Raphael Morris
Hozrim Lahar
"Returning to the Mountain" movement
Originally published at Israel 365 News - reposted with permission.