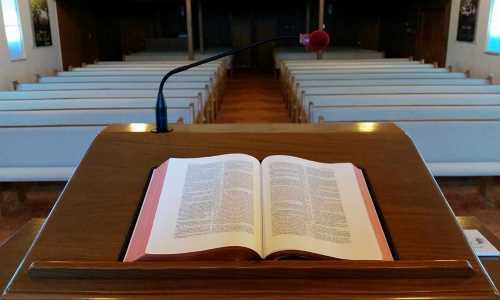 By Habringers Daily/Decision Magazine January 09, 2023
Share this article:
Parishioners in the United Kingdom were shocked and appalled in November to hear a University of Cambridge student pontificate during his chapel message that Jesus Christ is transgender.
Franklin Graham, president of the Billy Graham Evangelistic Association and Samaritan's Purse, was quick to rebuke the absurdity of the claim in a Facebook post, calling the sermon "blasphemous."
"This is repulsive and shameful," Franklin wrote. "To insinuate that Jesus Christ, the Holy Son of God, is transgender or to sexualize in any way His sacrificial death on the Cross for the sins of mankind is utter heresy."
While chapel speakers on secular university campuses have hardly been known for faithfully espousing God's Word, what's more alarming is an increasing unfaithfulness to the Scriptures by pastors of Christian congregations across the United States.
A 2022 survey of 1,000 Christian pastors across seven major groupings of denominations revealed that only 37% of clergy have a Biblical worldview. Most surprising was the percentage of pastors in evangelical denominations who don't uphold Biblical beliefs. Meanwhile, pastors of nondenominational and independent Protestant churches scored the highest for upholding Biblical beliefs.

"The American Worldview Inventory 2022," conducted by George Barna, director of research with the Cultural Research Center at Arizona Christian University and senior fellow at the Center for Biblical Worldview with the Family Research Council (FRC), analyzed 51 beliefs and behaviors, including salvation through Jesus Christ alone, absolute moral and Biblical truth, human purpose, sanctity of human life as well as other Biblical doctrines.
DEFINING A BIBLICAL WORLDVIEW
Among evangelical pastors surveyed, 30% said they don't believe that their salvation is based exclusively on confessing their sins through repentance and accepting Jesus Christ as their Savior.
Similarly, 39% of evangelical pastors reject that there is absolute moral truth and instead contend that each individual must determine their own truth. And only 62% agree that human life is sacred, while 37% said that having a faith matters more than which faith you have.
Defining a Biblical worldview as "a way of experiencing, interpreting and responding to reality consistent with Biblical perspectives," Barna said that only about one in three pastors surveyed interpret the world through the lens of Scripture.

"Only 37% of all pastors of Christian churches in America today have a Biblical worldview," Barna explained during FRC's Pray, Vote, Stand Summit in September. "That's barely one of every three who buy into God's Word to such an extent that their life is driven by Biblical truth. It's appalling. Think about that for a moment. What does evangelical even mean if the pastor doesn't buy into the Scriptures and teach those things to his people?"
Barna said 51% of adults surveyed claim to live according to a Biblical worldview. However, when their beliefs and behaviors are measured by what he calls the "seven cornerstones of a Biblical worldview" only 6% of American adults actually have a Biblical worldview.
Barna's seven cornerstones of a Biblical worldview are:
- God is the eternal, omniscient, omnipotent and just Creator.
- Humans are sinful by nature.
- Jesus Christ grants forgiveness of sin and eternal life when sinners repent and profess their faith in Him alone.
- The Bible is true, reliable and always relevant.
- Absolute moral truth exits.
- Success is defined as consistent obedience to God.
- Life's purpose is to know, love and serve God with all one's heart, mind, strength and soul.
Franklin Graham asserts that an individual with a Biblical worldview looks at the world and sifts all information through the lens of God's Word. "Scripture informs his thinking and behavior, guiding his intellect and moral determinations," he said. "The Bible is the bedrock that undergirds his entire life.
Over and against every competing worldview, the Bible forcefully declares, 'Do not be conformed to this world, but be transformed by the renewal of your mind' (Romans 12:2). In other words, the only way to see all of life accurately is through the transforming lens of Scripture."

SECULARISM IN THE CHURCH
Yet the prevailing worldview for 88% of Americans, Barna said, is syncretism, defined as a personalized or customized worldview dictated by an individual's preferences, desires and subjective truth claims. "Worldview is important because you do what you believe," he said. "So, if you believe God's truths, you can act upon those truths."
"Because pastors teach what they believe, many churches are becoming centers of syncretism and secular thought," Barna continued. "Perhaps without even realizing it, thousands of pastors have become leaders of a movement away from God, toward narcissism."
FRC President Tony Perkins contends that the survey's findings reveal that secular culture is influencing Christians more than Christians are influencing the culture, and the problem lies in the pulpit.
"There are many pastors today who are very tentative and hesitant to preach the full counsel of God's Word," he said during the FRC summit. "As a result, we have Christians who are hesitant to live out their faith. We need pastors who understand the Bible and its application to the world in which we live."
"People need the truth of the Word of God that has the power of God to change hearts and lives for eternity," Franklin wrote on Facebook.
"The Bible warns us to beware, 'there will be false teachers among you, who will secretly bring in destructive heresies, even denying the Master who bought them, bringing upon themselves swift destruction'" (2 Peter 2:1).
Originally published at Harbingers Daily - reposted with permission.