Biden Tells Israel To Give Money To Terrorists, Not Terror Victims 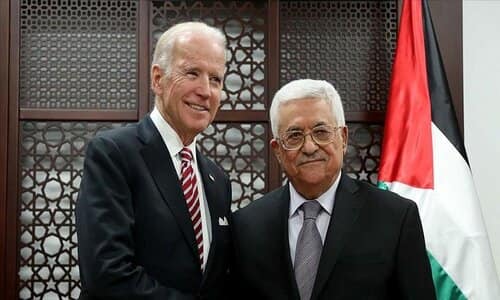 By Daniel Greenfield/JNS.org January 16, 2023
Share this article:
The Biden administration condemned Israel for giving $39 million in Palestinian Authority tax revenues to the victims of terrorism instead of the terrorists.
"It is morally just and important for the war against terror. There is no greater justice than using the funds for the victims of terror," Israeli Finance Minister Bezalel Smotrich said of the move.
U.S. State Department spokesman Ned Price condemned Israel's actions as a "unilateral response" that will "exacerbate tensions," and warned that the administration will raise the issue with Israel.
Price did not address whether the P.A. spending hundreds of millions of dollars a year to finance terrorist attacks against Israelis through its "Pay-to-Slay" program raises any tensions. The ruling PLO body spending millions to kill Jews is not unilateral, but Israel refusing to finance the murder of its own citizens is a dangerous move that will make peace difficult.
Palestinian Authority Prime Minister Mohammad Shtayyeh claims that if Israel doesn't give it $39 million, that "will promptly lead to its collapse."
The terror organization has been claiming variations of the same thing for over two decades.
"Palestinian Authority broke and in disarray," the media agonized in 2004. "Palestinians threaten to collapse the Palestinian Authority," they clamored in 2009. "Suspended tax transfers leave Palestinian economy on the brink" came the warnings in 2015. "Palestinian finances near collapse as cuts deepen," we were told in 2019.
The PLO's terror infrastructure is always on the verge of collapse, but sadly never does.

"Israel sells us everything, including water treatment, electricity and drinking water, and in fact profits from all of this," Shtayyeh whined.
Why after 30 years can't the aspiring terror state do anything for itself? The "Palestinians" have received an estimated $40 billion in foreign aid. Other estimates have put it at $50 billion.
Over $14 billion of that money went directly to the Palestinian Authority. What did all that money buy, apart from mansions for top terrorists?
Pinchas Rutenberg, who had unsuccessfully urged Russia's liberal Kerensky government to execute Lenin and Trotsky before it was too late, and fought to the last to defend the Winter Palace against the Bolsheviks, headed to Israel and began electrifying the country.
"No one doubts the duty of the British Empire to develop the Land of Israel, but who will be charged the financial burden? The British taxpayer? Or perhaps the Arab public that has lived in the country for hundreds of years and has not lifted a finger to develop it. True, Rutenberg is a Jew, and he recruited businessmen and Jewish capitalists to develop the natural resources of the Land of Israel and create jobs for its Arab residents, but is it therefore necessary to disqualify his vision?" Churchill opined.
In a matter of years, much of Israel was powered by the generators Rutenberg had built.
And all of this happened over two decades before Israel even achieved independence.
Somehow Jewish refugees could do a better job of providing electricity in the 1920s after only a few years than the Palestinian Authority has managed in the 2020s after 30 years.
Churchill correctly observed that the Arab invaders and colonizers had lived there for "hundreds of years" yet had "not lifted a finger to develop it." The cost of developing the territories under PLO control has passed right back to the British taxpayer, the American taxpayer and the Israelis.

Every few years, Israel threatens to cut off the power unless the terrorists pay their debts. Last time around, the debt had shot up to $500 million. Each time diplomats warn that if Israel cuts off the power, there will be a humanitarian crisis. But when isn't there a crisis?
Biden directed over half a billion dollars to the terrorists since taking office. And yet the PLO claims that it's still on the verge of collapse and Israel has to save it all over again.
"The P.A. must stop its involvement in terror if it wants to survive. As long as it continues to encourage terror, it is our enemy, and as such, what interest do we have to help it?" Israeli Finance Minister Smotrich pointed out.
The P.A. has never run out of money to pay the terrorists, but it can't manage to pay for its power bill or accomplish anything useful for its people.
Secretary of State Blinken and Jake Sullivan, Biden's national security adviser, are headed to Israel to scold the Jewish state for not giving money to the terrorists. The administration has used every possible forum to show contempt for and undermine Israel: including a recent U.N. session denying Jews the right to visit the Temple Mount, the holiest site in Judaism.
When Israeli National Security Minister Itamar Ben-Gvir visited the Temple Mount, the Biden administration called it an "unacceptable" violation of the "historic status quo" that bans Jews.
And yet Ben-Gvir's visit came and went.
Since then, he's told the police to take down the terrorist flags of the PLO.
"It is inconceivable that lawbreakers will wave terror flags, incite and encourage terrorism," said Ben-Gvir said. "I have issued instructions for the removal of the flags, which support terrorism, from the public space and to stop incitement against the State of Israel."
The Biden administration, which funds terrorism and incitement against Israel through its foreign aid to the P.A., is probably unhappy with this. Its spokesmen repeatedly accuse Israel of "unilateral" acts that increase "tensions." Every time a Jewish person sneezes in Jerusalem, Ned Price appears at a State Department podium to intone about unilateral sneezing raising tensions. And yet it's the Biden administration that is conducting unilateral actions meant to undermine Israel's status, like its rogue diplomatic operation to the PLO.

The level of pettiness included stepping in when an Iron Age spoon was seized from the founder of Birthright Israel to "return" it to the P.A., even though the Arab Muslim colonists had invaded the area a thousand years later and have no claim to the ancient artifact.
The spoon was identified in the files as coming from the country of Israel, "from the Hebron area" that "is the area of the richest Iron age Jewish tombs (many royal)."
The pettiness of seizing an artifact that originated from an Israeli source and turning it over to the Arab Muslim terrorists who currently occupy parts of Hebron to make a point is emblematic of the Biden administration's determination to undermine the Jewish people's claim to its land.
The Biden administration and the media are furious that Israel's new patriotic government is asserting its rights. It's a belated act of self-defense that the media treats as an attack.
A hysterical AP news story denounces Netanyahu's new government as "hard-line," "ultra-nationalist" and the "most hard-line and religious government in Israel's history," that is "shaking the foundations of Israel's democracy," "fomenting divisions" and "barreling toward conflict."
And that's just the first two paragraphs of a deranged screed masquerading as news coverage.
Israel's new government is not "shaking the foundations of Israel's democracy," it's restoring it after decades of hijacking by an activist judiciary, by implementing a system of checks and balances to equalize its power with that of the legislature.
It is not "fomenting divisions," it's confronting divisions created by leftists and dealing with them. And it's not "barreling toward conflict" but responding to the attacks against the Jewish state.
What has Israel's "ultra-nationalist" and "hard-line" government done so far? It diverted money that will be used by terrorists to finance the murder of Jews to the victims of these attacks.
One of its Cabinet members briefly visited the holiest site in Judaism. Another suggested that the terrorists need to choose between getting money through Israel and killing Jews.
All that outrage over basic acts of decency.
It's hard to argue with any of these actions when they're described objectively. That's why shrill labels like "hard-line" and  "ultra-nationalist" are being used to silence any meaningful debate.
The media doesn't want to talk about why Israel and the United States should be financing Islamic terrorism against Jews. Israel's new government is determined to make that the issue.
Anyone in the Biden administration, the media and activists who scream about "unilateralism" and "ultra-nationalists" should be asked to put away their thesauruses and answer why money should go to terrorists and not terror victims.
Originally published at JNS.org - reposted with permission.