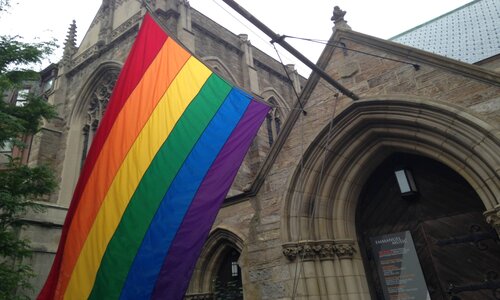 By Evangelical Focus January 24, 2023
Share this article:
As the Church of England announced its decision on same-sex couples on Wednesday, the head of the Anglican church, Archbishop Justin Welby, foretold that the decision of keeping the Christian doctrine of heterosexual marriage but blessing homosexual civil unions would not welcomed by many.
"I am under no illusions that what we are proposing today will appear to go too far for some and not nearly far enough for others, but it is my hope that what we have agreed will be received in a spirit of generosity, seeking the common good", Welby said in the press release that announced the decision.
The reactions in the first 24 hours have confirmed what the leader of the Church of England expected.
Disappointment Among Evangelical Anglicans
On the more evangelical or theologically conservative side of the Anglican Church, there has been a feeling of disappointment. John Dunnett, a spokesman of the Church of England Evangelical Council (CEEC), said that, while "grateful that the House of Bishops seem to be indicating they don't wish to change the doctrine of marriage", the proposals such as prayers and blessings of gay unions could be become a "Trojan horse" for doctrinal changes on the fundamental Christian doctrines in the future.

A similar view had Anglican Futures, another group defending the authority of Scripture in the teaching inside the Church of England. The agreement made public by the bishops was "lamentable because it denies the gospel and will please no one", they said, because "offering prayers of blessing to those in same-sex marriages, while claiming to maintain the doctrine Holy Matrimony as a marriage between one man and one woman for life is illogical".
Another group which defends the traditional Christian doctrine of marriage, the Church Society, said that while "sincere and specific apologies should be given to specific individuals" who have suffered when the church "has fallen short of standards demanded of us by God's word", Christians "cannot apologi for following Christ and proclaiming his Word, as if that was not somehow the best way for us all to live".
Gafcon, the global evangelical movement inside the Anglican Church on a international level, also lamented the move towards blessing homosexual unions in church. "Once again, our Western Anglican Provinces continue to 'go their own way' on matters of faith and practice without consultation or concern for the majority of Anglicans around the Global Communion", wrote its chairze, Foley Beach.
Actions like the decision taken by the Church of England "not only deny holy practice, but reject the authority of scripture, the teaching of the historic Church, and the consensus of the Body of Christ from every tribe, tongue, people and nation alive today", the Gafcon representative lamented.
Reactions From Other Evangelicals
Others outside the Anglican structures also commented on the move of the Church of England, the biggest Christian denomination in England and therefore often seen as the representative of Christianity in the country.

Peter Lynas of the Evangelical Alliance United Kingdom (EAUK) said: "There are reports the CoE is going to re-affirm its long held commitment to marriage between a man and a woman. Hopefully there will be clarity and a conclusion to this process. The message also needs to be consistent - you can't bless something you don't recognize".
He added: "Compassion for those who choose to live differently can be held alongside convictions about marriage. We can celebrate marriage between a man and a woman while acknowledging that our culture takes a different view and is entitled to do so".
A harder tone had the advocacy group Christian Concern, whose chief executive Andrea Williams described the move as a "capitulation by the Church of England. The bishops have lost the courage and conviction to state clearly the beauty of God's vision for marriage between one man and one woman".
The Anglican Church in the country would be "making way for the celebration of 'same-sex marriage' in all but name. This is a landmark moment and will go down in history as a turning point in the decline and fall of the Church of England - unless these proposals can be decisively resisted by the faithful in Synod".
Originally published at Evangelical Focus - reposted with permission.