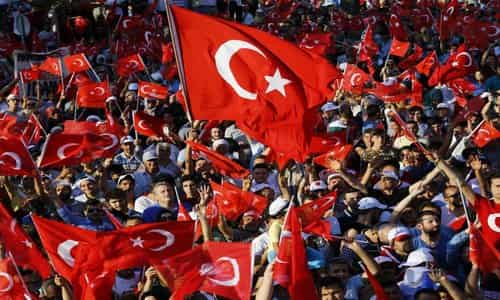 By Burak Bekdil/Gatestone Institute August 26, 2016
Share this article:
Turkey has been a republic since 1923, a multi-party democracy since 1946, and a member of NATO since 1952. In 1987, it added another powerful anchor into the Western bay where it wanted it to remain docked: It applied for full membership in the European Union (EU).

This imperfect journey toward the West was dramatically replaced by a directionless cruise, with sharp zigzags between the East and West, after President Recep Tayyip Erdogan's Islamist AKP party came to power in 2002. Zigzagging remains the main Turkish policy feature even at this day.
Until the summer of 2015 Turkey was widely known as the "jihad highway," because of its systematic tolerance for jihadists crossing through Turkey into neighboring Syria to fight Erdogan's regional nemesis, Syrian President Bashar al-Assad.
Turkey supported various jihadist groups in the hope that they would help Ankara unseat Assad. Then, under pressure from its NATO allies, it decided to join the U.S.-led, international campaign to fight the Islamic State of Iraq and Syria (ISIS) in Syria. Feeling betrayed, ISIS started to blow up Turkish cities.
At the end of 2015, Turkey risked tensions with Russia in order to advance its pro-Sunni Islamist agenda in Syria. Russia, together with Iran, provided the lifeline Assad needed to stay in power while Turkey stepped up its anti-Assad campaign.
In November, Turkey once again zigzagged toward the West when it shot down a Russian military aircraft, citing the violation of its airspace along its border with Syria. Turkey also threatened to shoot down any Russian aircraft that might violate its airspace again. It was the first time in modern history that a NATO ally had shot down a Soviet or Russian military airplane.
An angry Vladimir Putin, Russia's president, imposed punishing economic sanctions, which cost the Turkish economy billions of dollars. Turkey started zigzagging again. In July 2016, Erdogan apologized for downing the Russian plane, and in August he went to Russia to shake hands for normalization. Once again, Russia is trendy for the Turks, and the West looks passé.
Erdogan and his men are now accusing NATO and, in particular, the United States, of roles in the failed July 15 coup, which they claim is linked to a reclusive, U.S.-based Islamic scholar, Fethullah Gulen.
According to Turkish Defense Minister Fikri Isik, NATO should sit down and think where it went wrong in response to the coup attempt in Turkey. According to Turkey's justice minister, Bekir Bozdag, the United States would be sacrificing its alliance with Turkey to "a terrorist" (Gulen) if it refuses to extradite him.
Turkey's newfound love affair with Russia will inevitably have repercussions in Syria, and that pleases Iran. "Not only will Turkey have to 'digest' that [Russian-Iranian-Syrian] line, it will have to join it, entering into a pact with Putin and the ayatollahs. Clearly, this is where Erdogan has decided is the best place to pledge his allegiance," wrote Meira Svirsky at The Clarion Project. There are already signs.

Turkish Foreign Minister Mevlut Cavusoglu said that Turkey and Russia have similar views on the need for a ceasefire in Syria, the provision of humanitarian aid, and a political solution to end the crisis.
That must have caused shy smiles in Moscow: the Turkish John Wayne on his knees begging to work on Syria only months after he threatened to shoot down any Russian aircraft and kick the Russians out of Syria. Now Turkey is calling on Russia to team up and carry out joint military operations in a bid to crush ISIS in Syria.
After the last Turkish zigzag, Turkey and Russia found where they converge: Putin accuses the West of violating agreements by expanding NATO to Russia's borders and fomenting unrest in nearby Georgia and Ukraine, while in Turkey, the pro-Erdogan media accuses the U.S. of orchestrating the coup.
There are more alarming signals from Ankara. Cavusoglu, the foreign minister, said that Turkey may look outside NATO for defense cooperation.
Fuad Kavur, a prominent London-based film director and producer, described the Turkish zigzag in a private letter (quoted with permission):
"Erdogan's recent manoeuvrings remind me of how Hitler hoodwinked the West. Until four days before he invaded Poland, the West, ever sleepwalking, were utterly convinced Hitler was going to attack USSR, because he had come to power on an anti-Communist ticket. The West had a rude awakening only when, on 23 August 1939, Von Ribbentrop signed the Non-Aggression Pact with Molotov; and on Sept. 1, Hitler took half of Poland. Few days later, Stalin took the other half.
"What is the moral of the story? Until a few weeks ago, the West was comfortably day-dreaming that, despite his foibles, Erdogan was a staunch U.S. ally and an eager EU candidate. After all, had he not, only recently, downed a Russian jet? Then, suddenly, what do we see? Putin and Erdogan kissing and making up ... It is a matter of 'my enemy's enemy...'"
From the beginning, Russia was too big for Turkey to bite. A few billion dollars of trade losses and friendly reminders from Western allies that Turkey should keep up to better democratic standards were sufficient to get Ankara kneel down -- and perform another act of zigzagging. This, in all probability, will not be the last such act.
Originally published at Gatestone Institute - reposted with permission.