The Challenge Of Pastoral Burnout 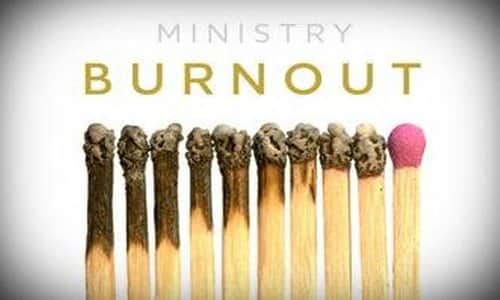 By Tom Olago September 27, 2016
Share this article:
The office of a pastor is high, noble and holy calling, much respected within Christendom. Due to their function in the church, pastors are perhaps the most visible among the five-fold ministry that also comprises apostles, prophets, evangelists and teachers.
The pastor is perceived to enjoy closer fellowship with God, greater hope of eternal rewards, and many blessings through service and spiritual strength.
Despite holding such an historically revered and even enviable position, pastors are throwing in the towel in seemingly unprecedented numbers.

One of the latest examples is that of megachurch Pastor, Pete Wilson, who resigned from Nashville's Cross Point Church saying he is "tired and broken,"  or simply burned out.
Cross Point now has over 7,000 attendees every week, at multiple locations, and is continuing to grow. Wilson, however, announced to his congregation that he is burned out and would be resigning.
"We have a community here at Cross Point where everyone's welcome because nobody's perfect and we really believe that anything's possible ... I haven't prioritized some other things that were equally as important. Leaders who lead on empty don't lead well. For some time, I've been leading on empty ..." he said.
"I think the best thing for Cross Point is for me to step aside," he continued. "And so I'm resigning as the pastor of Cross Point ... I really need your prayers and I need your support.
We've said that this is a church where it's OK to not be OK, and I'm not OK. I'm tired. And I'm broken and I just need some rest. I love you all; I love the vision of this church more today than I ever have."
Cross Point's elders said in a statement that this decision was completely Wilson's and that they pleaded with him to reconsider, but he remained firm. Others have praised Wilson's decision to have the wisdom to know when he needs to step down.
Was this just an isolated case that is fairly rare? Far from it: the trend has even been described as an 'epidemic'.
Karl Vaters in a recent blog post for Christianity Today encapsulated the general drift in a few short phrases: "It never gets easier. No matter how many times you hear about it. And we're hearing about it a lot more lately. In epidemic numbers".
Vaters predicts that this year, thousands will leave the ministry, burned out and hurting - from big and small churches, growing and stagnant ones. When famous pastors quit, Vaters notes, their successes and failures are amplified.
But a different price is paid by those who aren't known to anyone outside their family and small congregation. Whereas the successes and pains of well-known pastors are spotlighted, the successes and pains of the small church pastors are ignored and forgotten.
Both hurt equally. Both bear the burden of the problems that caused them to leave the church, and often the ministry. The pain of the megachurch pastor is intensified by failing under the unforgiving glare of the spotlight, while the pain of the other is amplified by failing in anonymity. Forgotten by almost everyone.
Both scenarios are toxic. They break the heart of Jesus, they damage his church, they devastate pastors' families, they ruin ministries and they make it harder for church members to trust a pastor again - or to trust God again...It doesn't have to be this way. It shouldn't be this way, Vaters concludes.
So what is the problem? What causes such high levels of pastoral burnout?  Although reasons vary widely, some seem to feature more prominently than others.
In an article published by Thom Rainer for the Christian Post three years back, Rainer listed seven reasons why Pastors routinely burn out and quit the ministry. He described one particular pastor's case:
"I heard the story again last week. A pastor I know announced his resignation. No moral failure. No severe crisis at the church. No major family problems. No sickness. He was simply burned out.
That's how he described it. He said he had gotten to the point that he was having trouble putting one foot in front of the other. So he quit. Without another job. His church family was stunned".
Rainer proceeded to suggest his seven reasons for this typical scenario - drawn or compiled from hundreds of Pastoral burnout cases that he'd known through the years:
1. The 24/7 mentality.
Many pastors can't "turn off" work in their mind. Even on their days off, they are waiting for that next telephone call or next crisis. Thus, they never relax.
2. Conflict.
I often heard it said that conflict is not the problem; it's how we handle conflict. That's true to a point. But if church conflict and criticisms are relentless, pastors wear down. They eventually burn out.
3. Expectations.
All pastors would be problem-free if they were omniscient, omnipotent, and omnipresent. Of course, no pastor can meet all the expectations of all church members. But many try. And they burn out as a result.
4. Unwillingness to let go.
Several years ago I was with a pastor who was frantically trying to sort the mail that had just arrived. He was hurrying to go to his next meeting. I asked him why he didn't let someone else take care of some of the things he was trying to do. His blank stare was his answer. He quit ministry three months later and never returned.

5. No friends.
Many pastors fail to develop meaningful friendships, people with whom they can "let their hair down." Without such outlets, burnout is more likely.
6. Not suited for some tasks.
This issue is similar to trying to meet everyone's expectations. First, such attempts are physically impossible. Second, pastors are not equipped to do everything well. But many try and many fail.
7. No life outside the church.
I am amazed at the number of pastors who have no meaningful hobbies or recreational activities outside the church. I am less amazed when those pastors burn out and drop out.
Other more recent reports suggest that not much has changed since Rainer shared his findings. In an analysis run in religionnews.com this January based on a LifeWay Research poll, Cathy Grossman highlighted some interesting statistics.
The single biggest reason (40 percent) for Pastors leaving was "a change in calling." Conflict in the church drove out 25 percent. And 19 percent succumbed to burnout. Those were the top three reasons in the Nashville-based research organization survey.
It is quite probable, too, that the combined 65 percent dropout figure ("change in calling" or "conflict") could largely be the consequence of burnout rather than entirely independent reasons.
As Ed Stetzer, Executive Director of LifeWay Research explained: "These things are interrelated...If you're burning out, chances are when conflict arises you're not going to respond well, and that will make the conflict worse."
With such potent mixes of external expectations and self-inflicted pressures, little wonder that church ministerial dropouts are increasingly on the rise. Thankfully, though, help is available for pastors and their families who need it.
One such source of help is Standing Stone Ministry. In a piece for newportbeachindy.com, Cindy Christeson recently ran a story profiling the ministry of Jim and Debbie Hogan, co-founders of a non-profit organization of experienced ministry leaders committed to caring for Christian ministry leaders and their spouses.
This includes pastors, vocational ministry leaders, and missionaries. Their stated goal is "to provide a safe place where ministry couples can come for guidance, care, understanding, and love."
"Every pastor needs a pastor they can trust," said Newport resident Debbie Hogan. "They have so much pressure on them to take care of others that they end up not taking care of themselves.
They get burned out. They feel alone. If 1700 to 1800 pastors are leaving the church every month, it's clear something is wrong. We're trying to change that statistic."
And change it, they have. Debbie explained that since 2002, 98 percent of the couples who have gone through the Standing Stone program are still in ministry. Retreats are held at various vacation homes across the country that people offer for the ministry.
An astounding success rate, by any standard. So just how do they do it?
"We are a C.A.R.E. team," Debbie said. "C means we connect, A means we appreciate, R means we relate to, and E means we encourage pastors. We shepherd the shepherds. Burnout is the main reason ministry leaders leave, and second is moral failure.
Our ministry is to be preventive, pre-emptive and proactive; to help before tragedy strikes.  We've seen the devastation and understand the need. God guided us to do this and He keeps guiding us."
As Christeson further explains, the Hogans developed a curriculum to train and mentor couples who are then paired with a mentee couple. The couples spend a week together at a beautiful home in a serene location.
So far, Debbie said, they have a total of 40 trained couples all over the U.S.  She said they pair the couples very carefully and prayerfully, taking into consideration age, denomination, activity level, likes, and dislikes.
"People hear of the need and the ministry and donate their vacation home for a retreat. We have homes available around the country, and we've even had a retreat in the Eastern Congo. We've also had interest from Vietnam, India, South Korea and Switzerland. It's exciting," Debbie explained.
After the retreat, the couples stay connected. Standing Stone also offers on-going individual encouragement to pastors and to wives, as each face unique challenges. This encouragement comes in the form of emails, phone calls, Skype sessions, meals, and other events.
"We have helped 900 pastors and wives so far," Debbie said. "Our goal is to reach and help a total of 3,000 by the end of 2017."