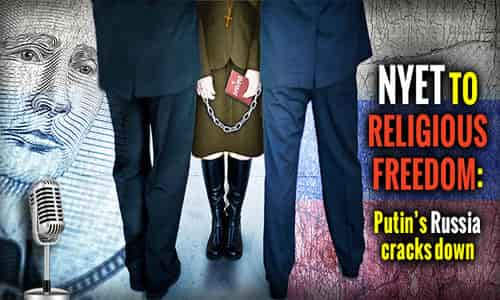 By Eric Metaxas/Breakpoint.org October 04, 2016
Share this article:
We all know about the dire circumstances faced by Christians in the Islamic world. Even the White House has finally called what's happening to Christians in Iraq and Syria "genocide."
But there's another place where religious freedom is under assault: Russia.
This is a surprise to some. After all, post-Soviet Russia takes pride in its Christian heritage. Its president, Vladimir Putin, has positioned himself as a champion of Russian Orthodoxy.

His stance on traditional marriage and opposition to homosexual activists has won him praise and admiration from many conservative Christians.
But just ask Donald Ossewaarde if he thinks that Putin and Putin's Russia are champions of religious freedom. Ossewaarde, a Baptist missionary from the United States, was one of the first people to run afoul of the recently passed "Yarovaya Law."
The Yarovaya Law, which purports to be a counter-terrorism and public safety measure, prohibits "religious gatherings in unregistered places," restricts promoting religion on the internet, and makes it easier for Russian officials to deny entry into and departure from the country.
And since the Yarovaya Law places severe restrictions on evangelization (or "proselytizing" as the Russian government sees it), it's not hard to see how a Baptist missionary might get into trouble.
The law defines "missionary work" as "the activity of a religious association, aimed at disseminating information about its beliefs among people who are not participants (members, followers) in that religious association, with the purpose of involving these people as participants (members, followers)."
Activity that falls under this definition may "only be performed 'without hindrance' at [designated] churches and other religious sites . . . [and it is] expressly forbidden to perform missionary activities in private residences."
Ossewaarde was arrested for holding a Bible study in his home and for posting public notices announcing his Bible study. He was fined 40,000 rubles, roughly $625. And his Russian court-appointed lawyer warned him to accept the fine and leave Moscow. Ossewaarde, however, is appealing his conviction.

Other groups such as Seventh-day Adventists, Mormons, and especially Pentecostals are rightly nervous about what happens next. A leader of Russia's Pentecostal Union told Forum 18, a Christian Human Rights group based in Oslo, that "the local police officer came to a home where a group of Pentecostals meet each Sunday . . . [and] with a contented expression he told them: 'Now they're adopting the law, I'll drive you all out of here.'"
Thus the law threatens to be yet another chapter in the century-old story of the persecution of Russian Pentecostals.
It should be clear that the law has little, if anything, to do with defending Christianity and everything to do with Russian nationalism. As author David Aikman told Christianity Today, "The Russian Orthodox church is part of a bulwark of Russian nationalism stirred up by Vladimir Putin . . . Everything that undermines that action is a real threat, whether that's evangelical Protestant missionaries or anything else."
Thing is, Islamists and Hindu nationalists also view uncooperative Christians as a threat to their idea of a "good society." And while, thankfully, Russia isn't using violence--at least not yet--the violation of religious freedom is just as real.
So, we should make our concern and displeasure clear to the State Department, the White House, and to our elected officials. And if we can't bring ourselves to do so, we should at least have the decency to dispense with the man-crushes on Vladimir Putin.
Originally published at Breakpoint.org - reposted with permission.