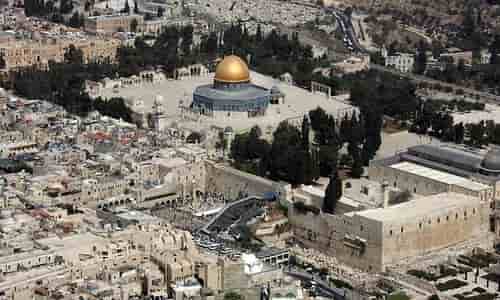 By Barney Breen-Portnoy/Algemeiner.com October 18, 2016
Share this article:
A number of prominent leaders in the US Christian community expressed dismay on Friday over UNESCO's approval yesterday of a resolution that distorts Jerusalem's religious history.
Telling The Algemeiner that Christians were "gravely concerned" by the resolution, David Brog -- the director of Christians United for Israel (CUFI) -- said, "The places under discussion, namely the Temple Mount, play a central role not only to the Jewish faith but also to the Christian faith. This resolution largely ignores and fails to honor this deep and holy connection."
Robert Nicholson -- the head of the Philos Project, a nonprofit group that "seeks to promote positive Christian engagement in the Middle East" -- told The Algemeiner, "UNESCO's decision to deny Jewish history is also a decision to deny Christian history.

If the Jews don't have a legacy on the Temple Mount, neither do Christians. And yet we know that our Messiah Jesus came to the Temple throughout his life to worship and pray to the God of Israel, as a Jew, six centuries before Muhammad was even born."
Nicholson went on to call it "mind-boggling" that "Christian-majority countries like Brazil and Mexico" would back the resolution.
"It demonstrates just how far some Christians around the world have strayed from their origins," he said. "Christianity is not a European or American religion -- it is a Hebraic religion with roots in the land of Israel. Our faith only makes sense when it is moored in its original Jewish context."
In response to a query from The Algemeiner, Darrell Bock -- a senior research professor of New Testament studies at the Dallas Theological Seminary -- said, "This resolution is misguided and ignores the history of the city. Jerusalem is a city with a shared history having a tender place in the hearts to those of many faiths. It does not belong to one faith and its importance owes much to both Jews and Christians. The United Nations should appreciate this shared element versus denying it."

Dexter Van Zile -- the Christian media analyst for the CAMERA watchdog group -- wrote to The Algemeiner, "As a Christian, I find the UNESCO resolution an assault against Jewish history deplorable and I see it as an assault against Christianity, as well. It is moral and intellectual stupidity of the highest order and shows how far UNESCO has been captured by the enemies of Israel and of Christianity."
In a statement released to the press, Special United Nations Envoy for the World Council of Independent Christian Churches and President of Proclaiming Justice to the Nations Laurie Cardoza-Moore said, "This resolution is worse than Holocaust denial, as it questions the very existence of the Jewish people. UNESCO has been overtaken by history revisionists and anti-Semites whose obvious hatred for Jews is so strong that they refuse to acknowledge the facts and the truth right in front of them.
By refusing to recognize the Jewish people's historic and biblical connection to the Temple Mount, UNESCO has denied the very foundation of our Judeo-Christian faith. This is an insult to millions of Jews and Christians alike and must be blocked."
Origianlly published at Algemeiner.com - reposted with permission.