Bad Religion - Many Christians Endorse Heretical Beliefs Without Realizing It 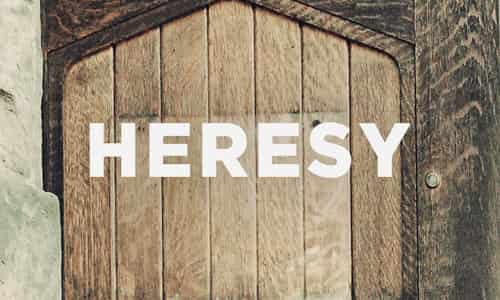 By Tom Olago October 25, 2016
Share this article:
Is American Christianity evolving into a faith with more 'believing unbelievers' and 'unbelieving believers' than simply true believers?
These oxymoron references perhaps best describe both the confusion and apostasy related to the doctrines and practices embraced by many professing Christians in America today.
In a recent article for breakpoint.org, G. Shane Morris decries the apparent lack of understanding of Bible theology by Americans in general. "In knowing both the content of the Bible and the doctrinal foundations of Christianity, we Americans aren't just at the bottom of our class.
We are, as Ross Douthat argues in his book, "Bad Religion," a nation of heretics", Morris stated.

Members of the flock have expressed their consternation in a variety of ways, wondering aloud how a declared atheist can be allowed to lead a confessionally Christian congregation.
"My understanding is that the United Church of Canada is a 'Christian' church based on the teachings of Jesus Christ," Pamella Fell wrote on a United Church website. "Why, why, why is she still with the UCC if she isn't a Christian?"
Yet, as Williams notes, the United Church which prides itself on its inclusiveness is treating the matter gingerly, reluctant to declare anything off-limits.
"At the heart of the concerns being raised is a tension between two core values, both of which are central to our identity as United Church. The first is our faith in God. The second is our commitment to being an open and inclusive church," wrote the Right Reverend Jordan Cantwell, head (moderator) of the United Church of Canada.
The crux of the matter seems to be that for a church that has progressively embraced every aspect of secular culture, it has become hard to say "no" to anything.
With a wink and a nod to the Bible, the United Church has accepted abortion, same-sex marriage, divorce, female ordination and openly gay ministers. But atheism seems a bridge too far.
In other words, for the United Church, it's all right to "mold" your idea of God so that he (or she) can approve of homosexual sex and transgenderism and killing babies in the womb, but please don't deny the divinity outright.
These increasingly common tendencies, to 'pick and choose' from the scriptures or to prioritize personal preferences irrespective of what the Bible teaches, appear to have filtered down to the average American Christian.
According to David Fiorazo in a recent publication of westernjournalism.com:
"Many American citizens claim to love God and believe we live in a Christian nation, but most of us would admit our actions don't always match our words, and our culture generally reflects darkness rather than the light of Christ.
People have more than one Bible in their comfortable homes, but prefer not to study God's Word because it would interfere with how they want to live. Many profess to be saved, and yet these same folks often say there are many ways to Heaven, the meaning of sin has changed, or Jesus is not God...."
Fiorazo concludes that what people seem to be following is humanism, moral relativism, New Age, Universalism or a religion of works, none of which can be seriously defended with Scripture. The evangelical and Protestant Church was compromised many decades ago and obviously weakened.
Part of Fiorazo's chilling conclusion: "One result is there are countless souls sitting in our churches who are not saved or don't really believe the doctrine of the church they attend...Welcome to the new post-Christian America".