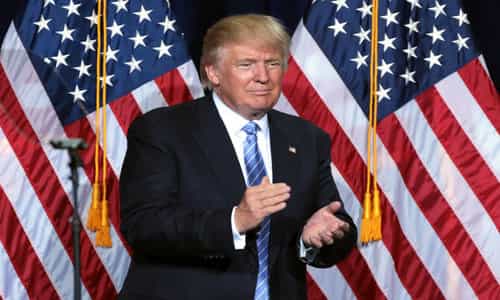 By Ben Cohen/JNS.org November 10, 2016
Share this article:
Donald Trump is now America's master.
As improbable as that outcome might seem to metropolitan Americans, it is actually quite consistent with the pattern of politics during the last decade.
Many of Trump's fundamental beliefs--his aversion to foreign engagements, his portrait of long-standing American allies as free-loaders, his deferential attitude towards Russian President Vladimir Putin--have been on prominent display during President Barack Obama's two terms in office.
Since politics is never smooth and is chock-full of unintended consequences, the election of a man without experience of government, the military, the judiciary, or public service is not as outlandish as it first may seem, once you consider the context.
Indeed, the absence of such experience made Trump more appealing to the masses who turned out to vote for him. It isn't just Hillary Clinton who has been humiliated.

The pollsters got it horribly wrong. So did the media tribunes of establishment politics. So did significant chunks of the Republican Party.
I am not going to try and predict the future. But I will identify a few general trends that should be of concern to all Americans, regardless of how we voted.
The political center is dead
Under Obama, confidence and pride in liberal democracy as the best form of government eroded dramatically. Trump is a product of that negativity. The Republicans are now a populist party and there is every reason to suspect that the Democrats will follow suit by shifting further left.
Grievance-based identity politics, not rational debate, will determine the desirability of policies both domestic and foreign. Don't be surprised if these transformations sometimes generate points of consensus; the extremes of left and right have a great deal in common when it comes to trade deals, economic protectionism, and foreign policy.
It's why many supporters of Clinton's socialist rival Sen. Bernie Sanders helped secure Trump's victories in states like Michigan and Pennsylvania.
It remains to be seen whether the matters on which these two camps disagree--immigration policy, the environment, criminal justice reform--turn out to be more important than those on which they agree.
The effects of globalization are more persistent than you think
Five years ago, it was the Occupy Wall Street movement that was railing against financial markets, international banks, and the free flow of capital across borders.
That turf now belongs firmly to president-elect Trump. Reversing the effects of globalization will not to be achieved without significant pain, assuming it can be achieved at all.
Trump is banking, probably correctly, that many American voters will interpret any future economic recession as a war between their president and the global financial elites that he denounced in his last campaign ads.
In other words, an economic crisis will work to Trump's political advantage, at least in the medium-term future.
Our world will be defined by spheres of influence
Donald Trump wants to insulate America from the threats to the homeland posed by the outside world. His clean sweep will likely ensure that he has legislative backing to take radical measures onpreventing immigration and tightening America's external borders.
These measures will be part of a new international consensus that divides the world into spheres of influence--something Putin understands well.
The consequences will be profound. We are already seeing the manifestations in Europe, where established political parties are giving way to insurgents on left and right in places like Poland, Hungary, Greece, Spain, and the U.K.

Don't be surprised if Marine Le Pen, the leader of France's historically fascist National Front political party, moves into the Elysee Palace after the elections next year.
It is this environment that will be the critical determinant of how America engages with Israel and the Middle East during the next four years. There are good reasons to be confident that, at least initially, relations between Trump and the Israeli government of Prime Minister Benjamin Netanyahu will be warm and productive.
But I fear that Trump's lack of experience and admiration for Putin will be a major risk should Israel be dragged into a destructive war with the terrorists of Hezbollah, for example.
Ditto with the Iran nuclear deal, where any pushback by the new administration will at some point have to confront opposition from Putin, who is aligned with the Iranians and the regime of Bashar al-Assad in Syria.
Even more fundamentally, a Trump embrace of Israel may gravely deepen the divide among American Jews and make it infinitely harder to sustain support for Israel as a bipartisan principle.
A situation in which opposition to Israel is an integral component of the opposition to Trump should not be welcomed by anyone who cares about American-Israeli relations.
These are the realities that Trump and his acolytes will have to deal with. Let us hope, however forlornly, that wisdom will be their guide.
Originally published at JNS.org - reposted with permission.