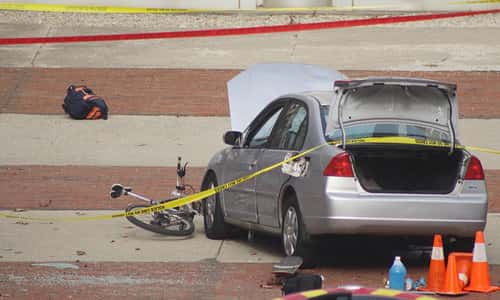 By Barney Breen-Portnoy/Algemeiner.com November 30, 2016
Share this article:
The car-ramming and mass stabbing attack at Ohio State University on Monday -- in which a Muslim assailant wounded 11 people before being shot dead by a police officer -- was further evidence that Islamist jihadis around the world mimic tactics used by Palestinian terrorists against Israelis, an international security consultant and political risk analyst told The Algemeiner on Tuesday.
"Unfortunately, I think it is 100% the same thing," Dr. Joshua Gleis, president of Gleis Security Consulting, said. "And it is going to be copied even more so moving forward, because it is incredibly simple to do and there are no red flags for owning a car or a kitchen knife."
In an interview with The Algemeiner in September -- following Islamist-perpetrated attacks in Minnesota and a bombing in New York City -- Gleis predicted, "We are going to see a rise in mass stabbings and vehicle-rammings by those with Islamist leanings, because they see how effective such methods are in places like Israel."

The surge of Palestinian violence against Israelis that began in the fall of 2015 has seen countless stabbing and car-ramming attacks. Last week, a Palestinian terrorist was shot dead after he tried to stab an Israeli police officer at the Qalandiya crossing between Jerusalem and Ramallah.
Monday's attack in Columbus, Ohio, was carried out by 18-year-old Abdul Razak Ali Artan -- a Somali refugee who arrived in the US in 2014 as a legal permanent resident, after living in Pakistan for seven years.
According to NBC News, Artan posted on Facebook before Monday's attack that he had reached a "boiling point," and made references to "lone-wolf attacks" and Islamic extremist cleric Anwar al-Awlaki, who was killed in a US drone strike in Yemen in 2011.

"America! Stop interfering with other countries, especially Muslim Ummah [community]," Artan wrote. "We are not weak. We are not weak, remember that."
In a Monday post in his Legal Insurrection blog, Cornell Law School Professor William A. Jacobson wrote, "It will be interesting to see the reaction to the shooting of the perp. When Israeli police shoot Palestinians in the act of car ramming or stabbing, there is an outcry from Palestinians and international 'human rights' groups accusing Israel of 'extrajudicial executions' and threats to take Israel to the Hague for war crimes...Unfortunately, when it comes to terrorist tactics, what happens in Israel doesn't stay in Israel."
On Tuesday, ISIS claimed responsibility for the Ohio State attack.
Originally published at The Algemeiner.com - reposted with permission.