Christians Shouldn't Be Allowed To Be Doctors Say Canadian Bioethicists 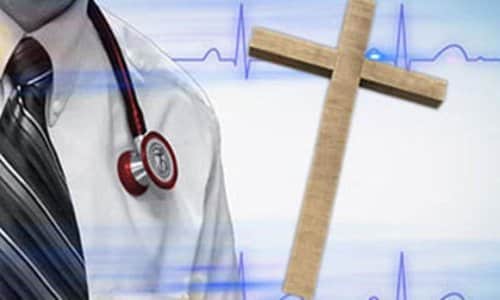 By PNW Staff December 12, 2016
Share this article:
Two Canadian bioethicists are calling for faithful Christians to be barred from medical school and conscientious objectors to be banned from practicing medicine.
Udo Schuklenk, of Queen's University, Ontario and Julian Savulescu of Oxford University, England, claim that a doctor's personal beliefs should not be able to interfere with their responsibilities to their patients and hence those who are unwilling to perform certain procedures such as euthanasia or abortion should have their medical licenses revoked.
The pair made the call in the bioethical journal which Julian Savulescu publishes titled 'Bioethics'. Their argument is founded on the idea that those who refuse to provide certain treatments are being unprofessional and have no place in modern medicine.

The debate about the rights of conscientious objectors versus the rights of patients has been going on ever since Canada legalized euthanasia back in June but this is the first time a ban on Christian doctors has been proposed so openly and by such prominent bioethicists.
While the idea may seem radical and even unconstitutional, it still has Christian doctors worried. If recent experience has taught Canada anything it's that even the seemingly most radical proposals can turn into legislation in a matter of years, if not months.
One of the most concerning parts of the paper for Christian doctors is the section where the authors argue that a doctor's morals and beliefs should never influence his work. In their words "Doctors must put patients' interests ahead of their own integrity".
If the proposals do eventually become law it would put many Christian doctors, as well as those of other faiths, in an impossible position.
They would be forced to choose between their careers and their faiths. For a country which prides itself on its anti-discrimination laws, it would be extraordinary if they passed legislation which effectively banned certain people from becoming doctors based on their chosen religion.
The authors go on to show little compassion for doctors who could be forced out of their careers saying that "If this (being forced to provide services they object to) leads to feelings of guilt, remorse or their dropping out of the profession, so be it".
They argue that Canada does not have a shortage of doctors or those wanting to become doctors, so they can afford to be more selective with who they pick. They argue it is entirely reasonable to admit only doctors who are prepared to do everything the profession legally requires.
Proponents of the rights of conscientious objectors argue that almost every jurisdiction in the western world allows doctors to opt-out of certain procedures on moral grounds and that it would be a gross violation of their rights to force them to quit the profession or violate their own moral principles.

Unfortunately attacks on conscience are taking place all over the western world. In some Australian states, for example, where abortion has recently been legalized, if a patient requests an abortion, doctors must legally refer to another physician who will recommend a termination or they could face having their medical licenses revoked.
Whereas the laws have not yet been tested, Christian doctors live in constant fear that they could be hauled before a medical tribunal for simply refusing to refer a woman for a practice which they believe to be gravely harmful and fundamentally evil.
Christians from all walks of life must make their voices heard on this issue because it's not just Christian doctors whose livelihoods are at stake. The same logic could easily be used to bar Christians from many other professions.
They could claim lawyers who don't believe in the right to abortion have no place at the bar. They could claim that teachers who have Christian beliefs will not be able to teach science or even philosophy objectively and should therefore be barred from the classroom.
Already Christian couples are being barred from becoming foster parents in many jurisdictions unless they agree not to pass on their religious beliefs. We have to act now or signs that read 'No Christians need apply' could easily become commonplace.