Has the Time Come For Amexit From The UN? 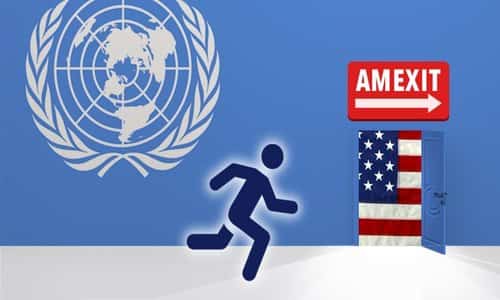 By Kenneth L Marcus/Algemeiner January 25, 2017
Share this article:
As British Prime Minister Theresa May plans a Brexit from the EU, Americans may soon ask what kind of exit we want from another international institution.
In our case, the organization is not the European Union, but the United Nations. Earlier this month, Senators Lindsey Graham (R-SC) and Ted Cruz (R-TX) introduced a bill to block taxpayer dollars from going to the UN.
These senators, like many Americans, are incensed by a recent anti-Israel resolution adopted by the world body. But the US' problems with the UN run deeper than one bad resolution.
They are endemic to the institution. At some point, our elected leaders will ask whether the time has come not just to defund, but also to depart -- and then replace the UN with something better.
That point may come sooner rather than later.

Journalist Edwin Black is launching a national conversation about United Nations reform. At a major noon-time event in the Rayburn House Office Building on Capitol Hill, I will be pleased to join Black, US Representative Trent Franks and other concerned leaders in the launch of a new project called "The Covenant of Democratic Nations" (CDN).
The event coincides with the first full workday of a new presidential administration. Additional events are planned for New York, Los Angeles, San Francisco, Berlin, London, Ottawa and many other cities.
More of a conversation than an institution or a treaty, the CDN asks us to consider whether the time has arrived to fundamentally rethink our involvement with international institutions.
The United Nations was established seven decades ago, in the aftermath of the Nazi horrors, to free the world from the scourge of war, to promote social progress, to encourage treaty compliance and, in the language of the United Nations Charter, "to reaffirm faith in fundamental human rights, in the dignity and worth of the human person, in the equal rights of men and women and of nations large and small."
Yet, in the ensuing years, this corrupt, ineffective and biased body has failed at all of these goals  -- but none more sadly than its pursuit of fundamental human rights.
In retrospect, the UN's basic problems were probably unavoidable from the start, given that the institution is by design primarily a congress of undemocratic, corrupt and ineffective nations.
Consider that the 2017 elected membership of the UN Human Rights Council includes Burundi, China, Cuba, Iraq, Qatar, Saudi Arabia, Venezuela and the United Arab Emirates.
In its one-sided obsession with Israel, the United Nations has largely disregarded serious human rights violations the world over. The UN, founded with such high hopes, has responded year after year with silence and indifference to persecution, torture and violence.
It has done little to nothing to respond to global brutalities and genocides. From the Cambodian genocide to the bloodbath in Syria, the United Nations has proven peculiarly unfit to the task for which it was founded.
The problem with the United Nations is not just its abject failure to accomplish its mission, but also its affirmative wrongdoing. It has condemned one single state in resolution upon resolution.
That state is democratic Israel. And through it all, tyrants throughout the rest of the world continue to go ignored.
To paraphrase Hillel Neuer, the UN has become the forum at which those who condone rape lament the rights of Palestinian women; the occupiers of Tibet bemoan the disputed territories West of the Jordan River; the bombers of Yemen castigate the treatment of Gaza; and the murderers of Muslims in Syria claim to care about Muslims in little Israel.
The UN's failings were on display last month with passage of Security Council Resolution 2334, just as those failings were previously on display when the UN passed the infamous 1975 resolution equating Zionism with racism.

As then-US Ambassador to the UN Daniel Patrick Moynihan said at the time, "If there were no General Assembly, this could never have happened."
Even the UN's boldest critics agree that the UN does some important work. The question is whether other institutions could do it better.
In Black's vision, the CDN will review all of the United Nations' treaties and actions. Some could be repealed, others continued and still others strengthened. The result could be a long-overdue rethinking of international law.
This doesn't need to happen all at once. In England, Prime Minister May has chosen a "hard Brexit." When it comes to the UN, we may have other options, and we may be well-advised to put strong new institutions in place before we withdraw from the old ones.
The key however is that we should permit ourselves to think boldly and not feel imprisoned by the international status quo.
Governor Nikki Haley, the US Ambassador-nominee, recently observed, "The United States is the indispensable voice of freedom. It is time that we once again find that voice."
When we do find that voice, we may need to find a better venue in which it should be heard.
Originally published at Algemeiner - reposted with permission.