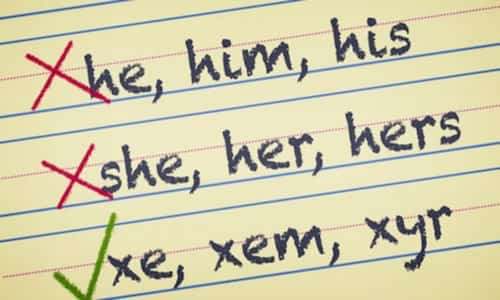 By PNW Staff February 07, 2017
Share this article:
The newest target of gendered-language crusaders? Motherhood.
Gender neutral language guidelines just took a turn for the bizarre, even for the new standards of liberal language manipulators when "expectant mother" made the list of words that could be offensive to pregnant females who identify as male and plan to play the role of fathers.
In an internal document, the British Medical Association has cautioned its members that the use of "pregnant people" is now preferred, along with a series of other similarly awkward terms that try to twist the English language into a bland, liberal parody of itself, so as not to offend even the most sensitive.
The 14-page booklet titled "A Guide To Effective Communication: Inclusive Language In The Workplace" applies to 156,000 doctor members and is meant to guide them in their patient and workplace interactions.

For reasons that are difficult to discern, "the elderly" is now out and "older people" is in, "disabled lifts" is replaced by "accessible lifts" and "biologically male/female" is now "assigned male/female" since extreme choice is preferred over biological reality.
The term "last name" is now out as well, to be replaced by "family name", one would assume in an effort to accommodate cultures that invert the Western order of personal and family names.
The 14 pages of nomenclature and updated terminology leave no gender-disability-culture-neutral stone unturned as the creepy-crawlies thus exposed, scatter in every direction.
Some of the choices of terminology seem to make little sense while others are simply attacks on traditional family values masquerading as inclusive language.
The term "elder" should hardly be considered offensive. A well-accepted term that implies not only advanced age but also wisdom is now replaced by a simple adjective, "older people" that is both vague and empty.
Older than what, a toddler? The term "older" seems to beg a comparison while "elder" needs none.
Banning the term "expectant mother" however is another matter. The pamphlet itself remarks that, "A large majority of people that have been pregnant or have given birth identify as women" but, goes on to say, "We can include intersex men and transmen who may get pregnant by saying 'pregnant people' instead of 'expectant mothers.'"
Denying a link between pregnancy and motherhood, all because of the disturbed sensibilities of a small group of transsexuals, has the subtle effect of diminishing motherhood for many millions of women.

In an effort, one would hope, better to serve patients, the document claims that, "As well as avoiding offense, it is about treating each other with dignity and as equal members of an integrated community." Based on the uproar and confusion it has caused, it is doubtful that it will do any of that at all.
Critics have slammed the British Medical Association for its extreme stance on gender-bending language by saying that it has gone too far in its bid to be politically correct.
Reverend Philip Egan, states that it would cause "great confusion and harm". Harm to the traditional family structure, harm to the concept of motherhood, and harm to the beautiful, God-given joys and trials of maternity.
Confusion for those patients who wonder at the need for expectant people, as if to ask what exactly they are expecting if not to give birth.
Among the dissenting Conservative Party voices, Minister of Parliament Philip Davis describes the document as "completely ridiculous," and asked the question on everyone's mind, "If you can't call a pregnant woman an expectant mother, then what is the world coming to?"
Which leaves us with the question: are medical professionals now defining the new 'normal'?