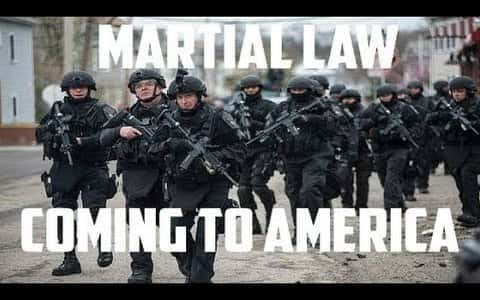 By Mac Slavo/SHTFplan.com February 11, 2017
Share this article:
The scenarios are many, the issues are complex. The current anger from the left, who are violently protesting against President Trump, is just one aspect of it.
But the Pentagon and the U.S. national security structure is increasingly looking towards the shifting demographics around the globe - people have moved from rural areas, and shifted into cities.
Where ever conflict stirs, there will be a need for military and SWAT response to the call. Entire cities will be locked down; door to door sweeps will often have violent ends.
Baghdad could be brought home to the streets of America, and the military already knows it.
The powers that be are deeply concerned about the unfolding situations with migrants, illegal immigrants, potential terrorists, political factions, violent protests, arson and riots.
Increasingly, they are training for and expecting a homegrown conflict that will call for them to restore order in a major cities - and even hunt down suspects block to block, like in the Boston Marathon bombing incident, while making some significant infringement of our civil liberties.

This appeared to indicate that in addition to boots on the ground, an additional pervasive centralized intelligence apparatus would be needed to properly plan for troop movements through such dense but vast environments that also would be made up of networks underground.
Rather than trying to guess what specific crisis may spill over into violence, or bring things to a stand still in traffic or electronic commerce, just consider the piling pressure that is growing in the techno hubs and swelling urban population centers.
New York, Boston, Los Angeles, Chicago, Houston and dozens of enormous cities around the world are all completely vulnerable.
Depending upon the political situation, unrest, violence or whatever else could spread across the entire Eastern half of the U.S., and the entire country could face collapse as it has never before known it. It is only a question of timing and circumstance.
There are some very major crises brewing right now. They are preparing; you should, too.
Originally published at SHTFplan.com - reposted with permission.