The Era Of Human-Animal Hybrid Chimeras Has Begun 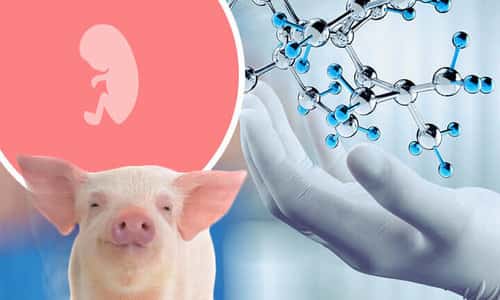 By Michael Snyder/End Of The American Dream February 21, 2017
Share this article:
Human-animal mutant creatures make for great material for science fiction writers, but we aren't supposed to be creating them in the real world.
In so many ways, the technological advancements that we have made as a society are outpacing our ability to handle those advancements, and this field is certainly a glaring example of that reality.
Just because we can create human-animal hybrid chimeras does not mean that we should. Genetic modification is a particularly dangerous science, because we are literally tinkering with the future of our planet.
And when it comes to humans and animals, those are two things that definitely should not mix.
Unfortunately, they are being mixed, and this could have enormous implications as our society plunges into a very uncertain future.

During all of the chaos surrounding the 2016 presidential election, a stunning announcement by the National Institutes of Health went unnoticed by almost everyone.
The following comes from a Huffington Post article entitled "The Island of Dr. Moreau For Real"...
In August 2016, the National Institutes of Health announced that it was lifting its ban on research that introduces stem cells from humans into animal embryos. Stem cells have the ability to evolve into any human cell and can grow into any human tissue.
The goal of this type of research is to grow human tissues and eventually human replacement organs in animals.
What an innovative way to improve upon transplantation medicine! But to realize this potential, we would create an organism that is part animal and part human! These hybrids are the stuff of ancient mythology.
These mixtures of different animals are called chimeras after the mythical ancient Greek creature that was part lion, snake and goat.
One goal of today's research is to produce tissues and organs for experimentation that will improve our understanding of human disease.
An alternative and longer term goal would be to produce organs directly for human transplantation. Imagine an infinite source of human organs - one wears out and you produce a new one as a replacement.
When human stem cells are introduced into an animal embryo, that creature becomes part human.
So does a part-human creature have rights?
If so, how do those rights differ from those of a full human?
These are the kinds of questions that ethicists are starting to wrestle with.
The thought of creating human-animal hybrids just for the purpose of growing organs which will be used for medical transplants is beyond disturbing. But this is what our scientists actually intend to do.
And just this week, the National Academies of Sciences and Medicine has released a brand new report that endorses the genetic modification of humans. The following comes from a Gizmodo article...
Today, the National Academies of Sciences and Medicine released a major new report and recommendations to ensure any such research done stateside in the future is performed responsibly and ethically.
The implicit message is that whether we like it or not, a future of gene-edited humans is on its way.
Messing around with the genetic material of humans means that you are literally messing around with the future of the human race.
And once this genetic material starts being passed from generation to generation, it will literally be impossible to put the genie back into the bottle ever again.
Fortunately, there are some experts that are extremely alarmed by this new report...
"The recommendations and conclusions of this report are unsettling and disappointing," said Marcy Darnovsky, PhD, Executive Director of the Center for Genetics and Society.
"Although they're couched in apparently cautionary language, they actually constitute a green light for proceeding with efforts to modify the human germline -- that is, to engineer the genes and traits that are passed on to future children and generations."
Hopefully the scientific community will listen to people like Dr. Darnovsky before things get wildly out of control.
There are some scientists out there that actually want to "enhance" humans by introducing genetic material from animals.
The theory is that introducing genetic material from animals could give us "super sight" or "super strength" or other extraordinary powers.
This is the kind of thing that researchers such as Steve Quayle and Tom Horn have been warning about for years.
In the future we could literally have a creature that is 60 percent human and 40 percent bear for example. How would we treat such a creature?
And as such creatures became more numerous, how would they treat us?
If you think that such a thing could never happen, just consider ten examples of creatures that are already being created by science...
#1 Genetically modified cattle with human DNA
#2 Rats with human kidneys
#3 Human-mouse hybrids with freakishly large brains
#4 Humanized milk-producing goats
#5 Mice with human anal sphincters
#6 Rabbit Eggs with Human Cells
#7 Pigs with Human Blood
#8 Sheep with Human Livers
#9 Cow Eggs with Human Cells
#10 Cat-Human Hybrid Proteins
How human does a creature have to be before it has a human soul?
Somebody better start asking questions like this, because we are "playing god" and we are tinkering with things that we do not fully understand.

We have already gone way too far, but scientists all over the globe continue to press on even farther. Even if we were to completely ban this kind of "research" in the United States, it would still progress in other industrialized nations all over the planet.
The genetic modification of humans and animals is part of a larger trend that we are currently witnessing. In the scientific community, there is a tremendous amount of excitement about the fact that humans can finally "take control of their own evolution".
There are many scientists that believe that we can use various forms of technology to give ourselves superhuman powers and radically extend our lifespans.
And as technology continues to increase at an exponential rate, these scientists believe that we will be able to ultimately create a "post-human society" where all sickness, disease, poverty and war are eradicated.
So they aren't concerned about the potential dangers of these new technologies because they believe that we are right on the verge of achieving immortality and transforming this planet into a technological utopia that will be perfect in every way.
In other words, they believe that humanity will no longer need "god" because we will be our own gods.
Unfortunately for all the rest of us, in their relentless pursuit of this very foolish dream they are racing toward genetic Armageddon, and they are opening up a Pandora's box of horrors that they simply do not understand.