Day Of Reckoning: The Collapse Of The Too Big To Fail Banks In Europe Is Here 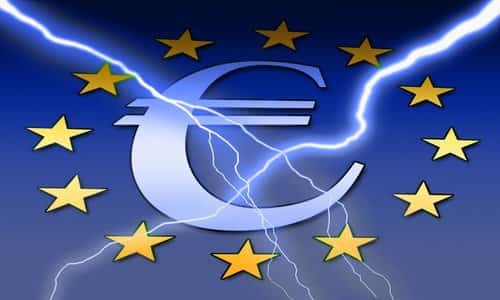 By Michael Snyder - The Economic Collapse Blog February 09, 2016
Share this article:
There is so much chaos going on that I dont even know where to start.  For a very long time I have been warning my readers that a major banking collapse was coming to Europe, and now it is finally unfolding.

Lets start with Deutsche Bank.  The stock of the most important bank in the "strongest economy in Europe" plunged another 8 percent on Monday, and it is now hovering just above the all-time record low that was set during the last financial crisis.  Overall, the stock price is now down a staggering 36 percent since 2016 began, and Deutsche Bank credit default swaps are going parabolic.  Of course my readers were alerted to major problems at Deutsche Bank all the way back in September, and now the endgame is playing out.
In addition to Deutsche Bank, the list of other "too big to fail" banks in Europe that appear to be in very serious trouble includes Commerzbank, Credit Suisse, HSBC and BNP Paribas.  Just about every major bank in Italy could fall on that list as well, and Greek bank stocks lost close to a quarter of their value on Monday alone.  Financial Armageddon has come to Europe, and the entire planet is going to feel the pain.
The collapse of the banks in Europe is dragging down stock prices all over the continent.  At this point, more than one-fifth of all stock market wealth in Europe has already been wiped out since the middle of last year.  That means that we only have four-fifths left.  The following comes from USA Today&
The MSCI Europe index is now down 20.5% from its highest point over the past 12 months, says S&P Global Market Intelligence, placing it in the 20% decline that unofficially defines a bear market.
Europes stock implosion makes the U.S.' sell-off look like childs play. The U.S.-centric Standard & Poors 500 Monday fell another 1.4%  but its only down 13% from its high. Some individual European markets are getting hit even harder. The Milan MIB 30, Madrid Ibex 35 and MSCI United Kingdom indexes are off 29%, 23% and 20% from their 52-week highs, respectively as investors fear the worse could be headed for the Old World.
These declines are being primarily driven by the banks.  According to MarketWatch, European banking stocks have fallen for six weeks in a row, and this is the longest streak that we have seen since the heart of the last financial crisis&
The regions banking gauge, the Stoxx Europe 600 Banks Index FX7, -5.59% has logged six straight weeks of declines, its longest weekly losing stretch since 2008, when banks booked 10 weeks of losses, beginning in May, according to FactSet data.
"The current environment for European banks is very, very bad. Over a full business cycle, I think its very questionable whether banks on average are able to cover their cost of equity. And as a result that makes it an unattractive investment for long-term investors," warned Peter Garnry, head of equity strategy at Saxo Bank.
Overall, Europe's banking stocks are down 23 percent year to date and 39 percent since the peak of the market in the middle of last year.
The financial crisis that began during the second half of 2015 is picking up speed over in Europe, and it isnt just Deutsche Bank that could implode at any moment.  Credit Suisse is the most important bank in Switzerland, and they announced a fourth quarter loss of 5.8 billion dollars.  The stock price has fallen 34 percent year to date, and many are now raising questions about the continued viability of the bank.
Similar scenes are being repeated all over the continent.  On Monday we learned that Russia had just shut down two more major banks, and the collapse of Greek banks has pushed Greek stock prices to a 25 year low&
Greek stocks tumbled on Monday to close nearly eight percent lower, with bank shares losing almost a quarter of their market value amid concerns over the future of government reforms.

The general index on the Athens stock exchange closed down 7.9 percent at 464.23 points  a 25-year-low  while banks suffered a 24.3-percent average drop.
This is what a financial crisis looks like.
Fortunately things are not this bad here in the U.S. quite yet, but we are on the exact same path that they are.
One of the big things that is fueling the banking crisis in Europe is the fact that the too big to fail banks over there have more than 100 billion dollars of exposure to energy sector loans.  This makes European banks even more sensitive to the price of oil than U.S. banks.  The following comes from CNBC...
The four U.S. banks with the highest dollar amount of exposure to energy loans have a capital position 60 percent greater than European banks Deutsche Bank, UBS, Credit Suisse and HSBC, according to CLSA research using a measure called tangible common equity to tangible assets ratio. Or, as Mayo put it, U.S. banks have more quality capital.
Analysts at JPMorgan saw the energy loan crisis coming for Europe, and highlighted in early January where investors might get hit.
"Standard Chartered and Deutsche Bank would be the most sensitive banks to higher default rates in oil and gas," the analysts wrote in their January report.
There is Deutsche Bank again.
It is funny how they keep coming up.
In the U.S., the collapse of the price of oil is pushing energy company after energy company into bankruptcy.  This has happened 42 times in North America since the beginning of last year so far, and rumors that Chesapeake Energy is heading that direction caused their stock price to plummet a staggering 33 percent on Monday&
Energy stocks continue to tank, with Transocean (RIG) dropping 7% and Baker Hughes (BHI) down nearly 5%. But those losses pale in comparison with Chesapeake Energy (CHK), the energy giant that plummeted as much as 51% amid bankruptcy fears. Chesapeake denied its currently planning to file for bankruptcy, but its stock still closed down 33% on the day.
And let's not forget about the ongoing bursting of the tech bubble that I wrote about yesterday.
On Monday the carnage continued, and this pushed the Nasdaq down to its lowest level in almost 18 months...
Technology shares with lofty valuations, including those of midcap data analytics company Tableau Software Inc and Internet giant Facebook Inc, extended their losses on Monday following a gutting selloff in the previous session.
Shares of cloud services companies such as Splunk Inc and Salesforce.com Inc had also declined sharply on Friday. They fell again on Monday, dragging down the Nasdaq Composite index 2.4 percent to its lowest in nearly 1-1/2 years.
Those that read my articles regularly know that I have been warning this would happen.
All over the world we are witnessing a financial implosion.  As I write this article, the Japanese market has only been open less than an hour and it is already down 747 points.
The next great financial crisis is already here, and right now we are only in the early chapters.
Ultimately what we are facing is going to be far worse than the financial crisis of 2008/2009, and as a result of this great shaking the entire world is going to fundamentally change.