Only The Beginning - Male Transgenders Begin To Dominate Female Sports 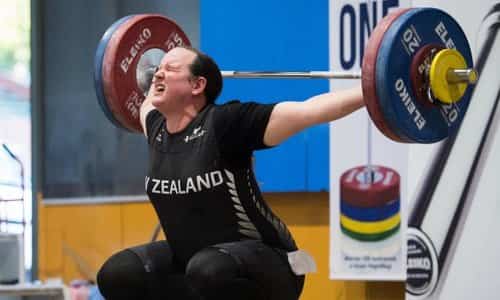 By Michael Brown/Ask Dr Brown March 24, 2017
Share this article:
The performance was stunning, as New Zealand weightlifter Laurel Hubbard absolutely smoked the competition, beating her nearest competitor, a Samoan woman, by nearly 20 kilograms.
The only problem is that Laurel is a biological male, born Gavin, which is why a number of the competitors felt the competition was unfair.
But of course it's unfair. Hubbard is a male, not a female, and even after months of hormone treatments, he still has unfair advantages over the other women, who sacrificed for years to make it to this elite level, only to lose to a man. How is that right?
As one woman tweeted in response to this news, "Imagine training for this your whole life, as a woman, only to have a known leader in men's weightlifting take your title."

Gavin Hubbard had "previously competed at a national level in men's weightlifting," making it all the more absurd that he would now be competing against women, which is why his presence was "met with criticism from Australian competitors who believe a transgender athlete in the female weightlifting category was not an equal playing field."
Not an equal playing field indeed - no more than it was an equal playing field when a female high school wrestler taking testosterone defeated all the other girls she wrestled against (she's on hormone treatments as part of her "transitioning" to male) and no more than it was an equal playing field when a male-to-female mixed martial artist manhandled (literally) her female opponents.
After the wrestling competition, Patti Overstreet, the mother of another wrestler, said, "She's standing there holding her head high like she's the winner. She's not winning. She's cheating. It's not equal. It's never going to be equal."
When it comes to the weightlifting competition, one of the other lifters said, "We all deserve to be on an even playing field. It's difficult when you believe that you're not. If it's not even, why are we doing the sport?"
Exactly? Why compete at all? Why have men compete against men and women compete against women? Why have weight classes?
Why not just throw everyone into the same competition and have the world's strongest (or fastest) human - of either sex, in any weight class, at any distance, in any event?
Why not blur all distinctions, if a man can now compete side by side with women?

Ridiculously, Phil Gifford, described as a prominent sports writer, "said Hubbard had every right to compete with the women after passing 'straightforward' hormone regulations."
Specifically, he argued, "It's testosterone levels which is a much more scientific way of measuring male gender, female gender than anything else that is currently known. And Lauren has passed all of those tests over the last 12 months."
So, then, a man who had lowered testosterone levels but all the other physical advantages a male would have over other women should be allowed to compete with the ladies?
Can you join me in saying "Enough!"
Let's continue to look for ways to help those struggling with gender identity confusion while protecting the rights of the rest of society. If enough of us raise our voices, positive change will come.
Originally published at AskDrBrown.org - reposted with permission.