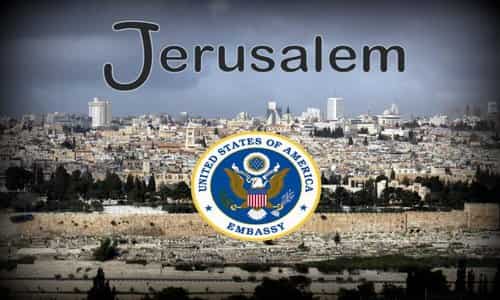 By Jonathan S. Tobin/JNS.org May 16, 2017
Share this article:
When President Donald Trump heads to the Middle East later this month, the world will be primarily watching closely to see if he makes any of his trademark gaffes that set off a cultural land mine in Saudi Arabia or Israel.
But the more important question is whether he will use the trip to actually make policy.
The expectation is that at some point during his visit, Trump will announce the convening of a new Middle East summit. Trump appears to believe in the "outside-in" approach to peace talks, in which Arab states like Saudi Arabia would play a role in trying to encourage and even muscle the Palestinians into negotiating in good faith with Israel at a peace conference.
But whether or not that dubious plan is put into action, Trump's presence in Jerusalem is also being scrutinized for any hint that the U.S. is prepared to acknowledge his stay at the King David Hotel will be time spent in Israel's capital.
Though Trump repeatedly pledged during the 2016 campaign he would move the U.S. embassy from Tel Aviv to Jerusalem, it hasn't happened yet.
It's still possible he could do it, perhaps even when he's there only a day before Israel celebrates Jerusalem Day--which this year marks the 50th anniversary of the city's reunification during the Six-Day War. But few in the know think this is going to happen.

In recent weeks, Trump has been listening to his more mainstream advisers such as Secretary of State Rex Tillerson and Secretary of Defense James Mattis. This has led him to take a more realistic attitude toward NATO, Russia and the conflict in Syria.
It's also likely to mean he will heed their warnings that an embassy move would set off riots in the Muslim world rivaling those occurring in reaction to a Danish newspaper publishing cartoons of the Prophet Mohammed. That's a price that not even a Trump may be willing to pay to keep a promise.
If so, then those pro-Israel activists who pushed hard to pin down Trump on the embassy issue last year will probably write it off as just a noble effort that failed.
But by putting the question of Jerusalem's status back on the national agenda and then failing, they will have made a mistake that could set back Israel's cause and boost efforts to re-partition the capital.
The effort to move the embassy was once a mainstream Jewish obsession and resulted in numerous Democratic and Republican party platform pledges about recognizing the reality of a united Jerusalem as Israel's capital. But after the promise was repeatedly broken, the pro-Israel community got the hint and stopped asking.
Nor was it something the Israeli government was demanding. Prime Minister Benjamin Netanyahu would be delighted if Trump were to do as he promised, but the location of the U.S. embassy ranks low on the list of the Israeli leader's priorities.
Netanyahu is far more interested in getting Trump to put pressure on the Palestinian Authority to stop inciting and paying for terrorism, and to understand its leader, Mahmoud Abbas, has neither the will nor the ability to ever make peace.
Keeping Trump focused on the Iranian threat is also more important to Netanyahu than where the U.S. ambassador spends his workday.

But, like it or not, raising the stakes on the embassy could make Trump's unremarkable decision to emulate his predecessors look like a defeat for Israel.
If the president appears in Jerusalem in the very week when its reunification is being celebrated without acknowledging he rejects the longstanding legal fiction that the city is not Israeli territory, it will be perceived as a setback that might ensure the embassy is never moved.
This will be more than just bad PR for Israel. The world's refusal to accept that even the parts of the city that were inside the 1967 lines make up Israel's capital is more than an annoyance.
It lends undeserved credence to the Palestinian propaganda campaign to deny the city's Jewish heritage.
It's also an essential element of a dogma impelling the Palestinians to refuse to recognize the legitimacy of a Jewish state no matter where its borders are drawn.
That's why Israel's friends are correct to want the U.S. to make a statement that the days of ignoring Palestinian intransigence and hatred are over.
But sometimes tactics are as important as strategy. Right now, what friends of Israel need the most is for Trump to understand the truth about Abbas and his Hamas rivals' refusal to make peace.
Yet by raising expectations about the embassy that are bound to be disappointed, they may hand Israel's foes an unearned and tragically important victory.
Originally published at JNS.org - reposted with permission.