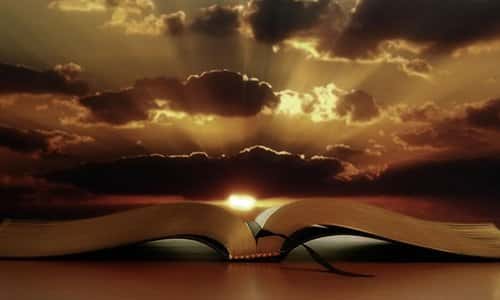 By Britt Gillette/EndTimesBibleProphecy May 16, 2017
Share this article:
The signs of the Second Coming are all around us. When His disciples asked Jesus to describe the signs, He gave them several. The Jewish people back in possession of Jerusalem (Luke 21:24-28)...  the Gospel preached throughout the world (Matthew 24:14)... the arrival of the exponential curve (Matthew 24:3-8)... and more.
The Old Testament prophets also pointed to a number of signs. An increase in travel and knowledge (Daniel 12:4)... the rise of a united Europe (Daniel 2:42)... the rise of the Gog of Magog alliance (Ezekiel 38-39)... and more.
Today, all these signs are either present or in the process of being fulfilled. Yet for 1,800+ years, none of these signs were present. Think about that. None of the signs. But today? Today, they're all around us.
Nevertheless, most of the world remains ignorant of the soon return of Jesus Christ. While I can understand why some people might overlook some of these signs, I don't understand how they could miss one sign in particular.
It's a clear and unmistakable sign. I believe in and of itself, it not only shows the return of Jesus is near - I believe it proves the existence of God beyond all doubt. So what is this sign?
Israel.
That's right. The existence of modern day Israel is a clear and unmistakable sign Jesus is about to return.

Israel Back in the Land
Centuries in advance, God foretold the modern day nation of Israel. He promised to bring the Jewish people back into the land and re-establish the ancient nation.
Moses declared God's promise when he said God would gather the Jewish people back from the nations where He scattered them and bring them back into the land of Israel (Deuteronomy 30:3-5).
Jesus also foretold the rebirth of Israel. He said Jerusalem would be destroyed and the Jewish people taken away to serve as slaves in all parts of the world (Luke 21: 24). He then said non-Jewish people would control Jerusalem until the Jewish people come back into possession of it (Luke 21:24).
The prophets also foretold the re-emergence of Israel. Hosea said the people of Israel would go a long time without a king, sacrifices, sacred pillars, or priests.
Then, in the last days, they will return to the land (Hosea 3:4-5). Joel said God will judge the world at the time when He restores Judah and Jerusalem, bringing His people back from among the nations where they were scattered (Joel 3:1-2).
This regathering of the Jews back into the land of Israel is repeated over and over by the prophets. Jeremiah said God would gather them back in the land just before His return (Jeremiah 23:7-8) and restore them to the land of Israel from distant lands (Jeremiah 30:2, 10).
Ezekiel said God would call them from "among the nations" (Ezekiel 39:28) and welcome them home from the lands where they were scattered (Ezekiel 20:34). Isaiah said God would call them from "the farthest corners of the earth" (Isaiah 11:12).
King David said God would gather them from "north, south, east, and west" (Psalm 107:3). And Zechariah said, though "scattered among the nations," God will bring his people back into the land of Israel (Zechariah 10:9).
Jeremiah said a day will come when people will no longer refer to the God of Israel as the one who rescued His people from the land of Egypt.
Instead, they will refer to Him as the one who brought His people back into the land of Israel from all the countries in the world where He had exiled them (Jeremiah 16:14-15). Everyone alive on earth today is a witness to this fulfilled prophecy. It's an undeniable sign of the Second Coming.
Israel in the Last Days
The regathering of the Jewish people in Israel is a miracle in our time. But the prophets had much more to say about this monumental sign of the last days. They said Israel would be reborn in a specific way. Not only would the people be regathered, but the nation would have specific traits.
1) Born in a Single Day - Isaiah said the reborn nation of Israel would come forth in a single day. He likened it to a woman "who gives birth in an instant without labor pains" (Isaiah 66:7-9).
Written more than 2,500 years ago, Isaiah's prophecy seemed ridiculous. No nation had ever come into being in a single day.
But Israel did. On May 14, 1948, David Ben-Gurion read the Israeli Declaration of Independence, a document which declared Israel to be an independent state. That same day, the United States recognized Israel as an independent and sovereign nation.
2) One, United Nation - When Solomon died almost three thousand years ago, Israel broke into northern and southern kingdoms.
It remained divided throughout the lifetimes of both Isaiah and Ezekiel. Yet both proclaimed the regathered nation of Israel would be a single, united nation - just as we see today with the modern day nation of Israel.
Isaiah said Israel and Judah would no longer be rivals (Isaiah 11:13). And Ezekiel said the regathered people would be unified into one nation (Ezekiel 37:22).
3) The Desert Will Bloom - Through the prophet Isaiah, God promised Israel would blossom agriculturally and fill the whole world with its fruit (Isaiah 27:6). He repeated this promise eight chapters later when He said the desert will bloom (Isaiah 35:1).
Through Ezekiel, God said His people would re-enter the land, produce much fruit, and be more prosperous than ever before (Ezekiel 36:8-11). Do we see this today? Yes. In a 1869 visit to what is today known as the nation of Israel, author Mark Twain described the land as "barren," "dull of color," and "unpicturesque in shape." All he saw were "unsightly deserts fringed with a feeble vegetation."
Yet today, the tiny nation is an agriculture giant. The land is fruitful and prosperous, and Israel is one of the world's leading fresh citrus producers and a net exporter of more than forty varieties of fruit.
4) Surrounded by Enemies - The Bible said the regathered people of Israel would be surrounded by enemies. "Come, let us wipe away the nation of Israel. Let's destroy the memory of its existence," they'll say (Psalm 83:4). "Let us take for ourselves these pasturelands of God" (Psalm 83:12). Ezekiel said Israel's neighbors would say "God has given their land to us" (Ezekiel 11:1417), and "Israel and Judah are ours. We will take possession of them. What do we care if their God is there?" (Ezekiel 35:10).
This is what we see today. Ever since the rebirth of Israel in 1948, the daily headlines have included these Bible verses. The surrounding Muslim nations claim the land of Israel for themselves. They have no regard for the God of Israel. The prophets foretold this exact situation more than 2,000 years ago.
5) A Small, Powerful Military - Centuries in advance, the Bible said the reborn nation of Israel would be a great military power. Ezekiel said the regathered nation of Israel would field "an exceedingly great army" (Ezekiel 37:10). Zechariah said it would be like a fire among sheaves of grain, burning up the neighboring nations (Zechariah 12:6).

It would be so successful even the weakest Israeli soldier will be like David (Zechariah 12:8). Since 1948, Israel has fought no less than four conventional wars against its neighbors. Despite being outnumbered more than 50 to 1, and despite being surrounded on all sides, Israel has experienced overwhelming victory every time.
A Miracle in Our Time
The reappearance of Israel on the world stage is a modern day miracle. More than 2,000 years ago, God promised over and over again to bring the Jewish people back into the land He gave Abraham. For 1,878 years, the nation of Israel did not exist. For all those years, the Jewish people were scattered throughout the world. Yet they remained set apart for God.
Unlike the Hittites, Amorites, Jebusites, and other conquered people, they did not assimilate into the nations where they lived. Then, in 1948, God fulfilled His promise and made Israel a nation once again. It was reborn in a single day (Isaiah 66:7-9).
It was unified as one nation (Ezekiel 37:22). It transformed a desert wasteland into an abundant land of fruit (Isaiah 27:6). And in the face of many enemies, God has given Israel military victory after victory just as He promised (Zechariah 12:6).
We are all witnesses to this miracle. How could anyone see the nation of Israel and not give glory to the God of Abraham, Isaac, and Jacob? How could anyone deny this is anything less than God's doing? God promised to bring His people back into the land, and He did.
The rebirth of Israel as a nation is more than just a fulfilled prophecy. It's one of the biggest events in world history. Why? Because it's an undeniable sign of the Second Coming of Jesus Christ.
Next to the convergence of all end times signs (Luke 21:28), it's arguably the biggest sign of all. For 1,878 years, Christians could not point to this sign. Since 1948, they can.
Isaiah said Jesus will return and establish His everlasting kingdom after the Jewish people return to the land of Israel (Isaiah 11:11-12).
Joel said, after the restoration of Israel, God will gather the armies of the world into the valley of Jehoshaphat (Joel 3:1-2). This is a direct reference to Armageddon (Revelation 16:16) which occurs just before the return of Jesus Christ. Micah said God will gather His exiled people and make them a strong nation, and then, God will rule from Jerusalem as their King forever (Micah 4:6-7).
The message is clear. It's undeniable. Israel is back, and Jesus is coming (Revelation 22:20)!
Learn more about the converging of prophetic events at this unique time in history with our brand new DVD release - The Coming Convergence.
Britt Gillette is author of the ebook Coming to Jesus: One Man's Search for Truth and Life Purpose as well as Signs of the Second Coming: 11 Reasons Jesus Will Return in Our Lifetime.