Bigger May Not Always Be Better - Some Megachurches Struggling With Commitment 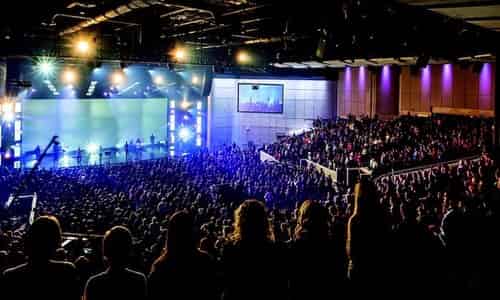 By Tom Olago January 16, 2016
Share this article:
Church growth, both in size of membership and related building facilities, seems to be a key objective of most churches. Yet, recent research indicates that bigger churches are generally synonymous with lower member commitment, and represent membership that is "less involved".

The study also said that megachurches mirror the "increasing detachment from religious organizations," which is evident in our society.
A recent Christian Post (CP) article by Michael Gryboski shared this and other study findings as well as excerpts drawn from an interview with head researcher David Eagle, a pastor and a post-doctoral research student at Duke University. Eagle also had his study published in American Sociological Association's journal Socius.
Could it be that greater quantity somehow translates to compromised quality when it comes to church sizes? This particular finding is said to be most pronounced for white Mainline and black Protestants churches, with the models demonstrating that "a strong, negative relationship exists between size and the probability of attendance", according to the study.
The study concludes by implying that irrespective of the different religious streams, attendance was negatively affected with increase in congregation size. This overarching finding by Eagle that seems to debunk 'the bigger the better' myth in relation to churches seems not to surprise him though.
"I also pastored at a time when leaders in my denomination really pushed church growth and argued that building big churches had the most promise of attracting non-Christians... I was skeptical of this approach, and began to think that an emphasis on growth could lead to unintended consequences - things like creating a less involved membership," said Eagle.
He also noted that German sociologist Georg Simmel (1858-1918) argued that big groups create a less involved membership.
What Eagle did find interesting though was that "...the rapid increase in the number of really big churches might actually tie into what many have observed - the declining importance of religion and religious involvement in the US".
Eagle told CP that he believed three factors were generating this trend:
1. Megachurches having an inherent appeal for those who do not want to attend church regularly: Those who do not already attend church as frequently may also find larger churches appealing since they would not feel pressured into regular attendance.
Another independent study published late 2015 on megachurches corroborated these findings. It stated that although overall attendance in a strong majority of megachurches is growing, weekly megachurch attendance numbers are dropping.
In the words of Eagle: "I wondered if megachurches are a reflection of that - they provide places where people can go less frequently, whose comings and goings may not be noticed and where more staff means that they don't need to take on as major a volunteer role as they would in a smaller church."
The study further elaborates that unless one is a visible member of the church, it is not feasible to keep count of other attendees. In such scenarios, it is noted that the church ceases to be a close-knit community, but that its function is relegated to teaching only.

2. Megachurch attendees struggling to form social connections: The research notes that the results fit within the "theoretical perspective that argues smaller groups have an easier time promoting group cohesion and participation due to the greater density of social relationships contained within smaller organizations."
The abstract also says that the "results support the theory that group cohesion lies at the heart of the size-participation relationship in churches."
3. Megachurch attendees having more members with high incomes than smaller congregations:  Eagle said his research suggested that Megachurches are attracting more dual-income families, who are much more time-stressed and are therefore more inclined to pick and choose their involvement."
In response to studies like these, more and more churches are emphasizing the importance of small groups. Although certainly not a cure-all for every situation, small groups offer tremendous advantages that the larger church can't fulfill in the context of its more sizable services.
The small group atmosphere is ready-made for building friendships. People talk more in small groups. A quick handshake and "hello" while you turn to greet your neighbor for 30 seconds inside a larger service is not going to develop a meaningful relationship with them.
Small groups provide an ideal way to care for the needs of people within the church. When one believer in a small group is struggling financially, emotionally, spiritually, socially, etc., it is much easier for the members of the group to notice and provide help. The relationships formed within small groups form a strong fabric within a church. Relationships that are formed outside of the (sometimes artificial) setting of a church service, are relationships that will endure and strengthen over time.
Small groups provide a way for Christians to live out their faith instead of merely hearing more preaching or teaching. If Sunday morning is for listening, then the rest of the week is for living. Whether its discussing the Sunday sermon, talking about a spiritual battle, or simply praying for one another, small groups create a context for Christians to live out their faith in real life.
When a few people are together, every individual is expected to be involved and to participate. This active involvement is an effective way to learn better and helps one to feel they are an integral part of the larger body of believers.
Small groups are not just a solution to the disconnect that some feel in the larger churches. are feeling. All of us need accountability in our lives, encouragement in our walk with God, or help in some way. Small groups provide a great way better to meet these needs no matter what the church size.