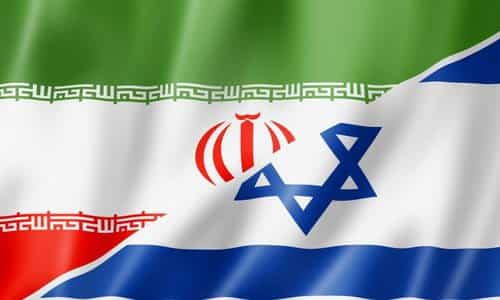 By Yaakov Lappin/JNS.org July 11, 2017
Share this article:
With the help of its powerful allies, President Bashar al-Assad's regime is gradually consolidating its grip over parts of Syria.
The six-year Syrian conflict has long ceased being a civil war, and Assad is no independent actor, but rather, he is part of an Iranian-led regional coalition.
Assad's recent victories are setting the stage for the continued spread of his steadfast backer, Iran, and its network of heavily armed Shi'a proxies.
Israel has been issuing stern warnings to Iran, telling it not to repeat past efforts to use its presence in Syria to set up bases of attack against Israeli targets.
The Jewish state has been frequently dealing with errant fire from Syria landing in Israeli territory in the Golan Heights--nearly 20 such instances in recent weeks.
Israel usually responds by firing on Syrian regime targets and vowing to respond to every breach of its territory.

Israel's wider concern, however, is that wherever Assad's forces end up rolling into, Iran's influence tends to appear.
Most recently, Israeli Prime Minister Benjamin Netanyahu cautiously welcomed a southern Syria cease-fire, brokered by the U.S. and Russia, that came into effect Sunday.
The cease-fire followed Israel's reported push for Russia and the U.S. to establish a buffer zone in southern Syria where the Hezbollah terror group and other Iranian proxies would not be allowed to operate.
Tens of thousands of Iranian-backed Shi'a militia members are currently operating across Syria. Under Iranian command, they combat Sunni rebel organizations seeking to depose the Assad regime.
Tehran is also working to link up its forces in Iraq together with those in Syria, with the goal of creating a continuous land corridor that stretches from Iran to Lebanon.
Meanwhile, Iran continues to use Syria as a transit zone for the trafficking of weapons to Hezbollah in Lebanon. Iran has overseen the construction of weapons factories in Syria--and now in Lebanon, too--that can produce accurate missiles for Hezbollah.

Dr. Eitan Shamir, former head of the National Security Doctrine Department in Israel's Ministry of Strategic Affairs, told JNS.org Israel should deal with Iran's threatening activities in Syria by setting up and enforcing "a number of red lines."
Red lines would include a ban on actions directly threatening Israeli security, such as the construction of a missile launch system in the Syrian Golan Heights, said Shamir, a researcher at the Begin-Sadat Center for Strategic Studies.
"Secondly, there should be a continuation of what the [Israeli] military calls 'the war between wars,' the continuous offensive intelligence and thwarting activities. At the same time, there should be serious preparation for the scenario of war," Shamir said.
During the last six years, Israel has reportedly waged a low-profile campaign to selectively target the Iranian-Hezbollah weapons trafficking network in Syria.
In Shamir's estimation, the IDF needs to safeguard its size and strength in light of the developing threats to the north.
"Mainly, it must continue to strengthen the ground maneuvering army, in case of an eruption on multiple fronts. That means continuing to invest a lot in the IDF, and not making cuts because it's fashionable," he said.

Iran's Islamic Revolutionary Guard Corps (IRGC) and its overseas elite unit, the Quds Force, have in the past attempted to exploit their presence in southern Syria to orchestrate attacks on Israel, resulting in reported deadly Israeli airstrikes.
Israel's defense establishment is closely monitoring the crowded Syrian arena, always on the lookout for a renewed Iranian attempt to set up bases of attack, or attempts by Hezbollah--Iran's Shi'a-Lebanese terrorist army--to move into southern Syria, thereby threatening Israel from both Lebanon and Syria.
Iran's push into Syria has been successful so far, Shamir said.
"The Iranians have obtained an outpost in this area," he said, explaining that the Islamic Republic is using forces such as Hezbollah, Shi'a Iraqis and foreign Shi'a legions from across the Muslim world "so that the price is less painful" for Iran.
Dr. Ely Karmon, a senior research scholar at the International Institute for Counter-Terrorism in Herzliya, told JNS.org the Iranians are trying to exploit Russia's intervention in Syria.
Prior to Russia's entrance into Syria and its management of the air war against Sunni organizations, the Iranian-backed forces failed to stop the rebels.
Russia's intervention "changed the map," Karmon said, noting the "big victory" for Assad and his Shi'a allies in Aleppo. Now, he said, "they are trying to do the same in south Syria.
But here, they have a problem. Israel, Jordan and the Americans are opposed to their spread." All three nations could act to prevent Iran from moving into southern Syria.
Currently, Iran is commanding some 6,000 Hezbollah fighters, 7,000 Iraqis and some 20,000-30,000 Afghan Shi'a combatants in Iran, as well as some 100,000 Shi'a militia members in neighboring Iraq.
The Iranians also built up a pro-Assad militia composed of local Syrians, called the National Defense Forces, which has tens of thousands of members.
"The fact that the Iranians are integrated with Assad's army, and are trying to link up their forces from Iraq and Syria," Karmon said, shows how they are trying to create the land corridor from Iran to Lebanon.
The Iranians could come back and try to attack Israel from southern Syria, and are also seeking to create a port on the Syrian Mediterranean coastline, he warned.
"There's no doubt that this is their strategy," Karmon said. "At this stage, they are succeeding--hence we are seeing warnings by Israeli leaders." Yet Karmon expressed hope that the U.S. could work with Russia to create Iran-free zones in southern Syria.
He said reports of Israeli cooperation with moderate Sunni rebels near the Israeli border could form a part of Israeli efforts to keep the Iranians at bay.
But Israel cannot rely on America stopping Iran in Syria, Karmon cautioned.
"I think Israel must be ready, if the U.S. won't take steps vis-a-vis the Russians [to curb Iran]," he said. "Israel must see an Iranian presence on its border as a casus belli [justification for war]."
Originally published at JNS.org - reposted with permission.