Will The Coming Eclipse Begin A Period Of "40 Days And 40 Nights" For America? 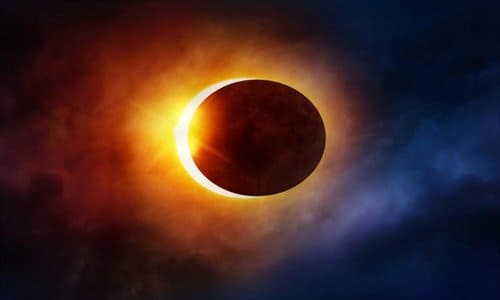 By Michael Snyder/End Of The American Dream August 16, 2017
Share this article:
Next Monday, we are going to witness one of the strangest events in U.S. history.  This will be the first total solar eclipse to ever be seen only in the United States and nowhere else.
Millions upon millions of people are going to flock to areas of the country where the full eclipse will be visible, but everyone in the continental United States is going to be able to see at least a partial eclipse.
There are lots of very unusual numbers associated with this eclipse, but in this article I want to focus on the number 40, and as this article unfolds you will start to understand why.
Our planet is the only place where you can view a total solar eclipse, and that is because our sun and our moon appear to be the same size in the sky.

Of course the sun is much, much larger than the moon, but because the sun is approximately 400 times farther away than the moon they appear to us to be nearly the same size...
The sun and moon appear the same size in Earth's sky because the sun's diameter is about 400 times greater - but the sun is also about 400 times farther away.
At this particular moment in Earth's history - although the sun's diameter is about 400 times larger than that of the moon - the sun is also about 400 times farther away. So the sun and moon appear nearly the same size as seen from Earth. And that's why we on Earth can sometimes witness that most amazing of spectacles, a total eclipse of the sun.
I have previously discussed the fact that the solar eclipse on August 21st is the first day in a 40 day period that ends with Yom Kippur.  But what I haven't mentioned is that the month of Elul on the Jewish calendar begins on the very next day after the eclipse.
Elul is traditionally known as "the month of repentance", and it is a time when people all over the world prepare for the High Holy Days...
In the Jewish tradition, the month of Elul is a time of repentance in preparation for the High Holy Days of Rosh Hashanah and Yom Kippur. The word "Elul" is similar to the root of the verb "search" in Aramaic.
The Talmud writes that the Hebrew word "Elul" can be understood to be an acronym for the phrase "Ani L'dodi V'dodi Li" - "I am my beloved's and my beloved is mine" (Song of Solomon 6:3). Elul is seen as a time to search one's heart and draw close to God in preparation for the coming Day of Judgement, Rosh Hashanah, and Day of Atonement, Yom Kippur.
It is also believed that the first of Elul was when Moses began a period of 40 days of fasting and prayer on behalf of the people of Israel after they worshipped the golden calf.  The following comes from Rachel Baxter...
According to Jewish tradition, the month of Elul is the time that Moses spent on Mount Sinai preparing the second set of tablets after the golden calf incident (Exodus 32; 34:27-28).
He ascended on Rosh Chodesh Elul and descended on the 10th of Tishri, at the end of Yom Kippur, when repentance was complete. Elul marked the beginning of a period of 40 days that Moses prayed for God to forgive the people for worshipping the golden calf.

Of course the number 40 comes up time after time throughout the Scriptures.  Here are a bunch more examples...
In the Old Testament, when God destroyed the earth with water, He caused it to rain 40 days and 40 nights (Genesis 7:12). After Moses killed the Egyptian, he fled to Midian, where he spent 40 years in the desert tending flocks (Acts 7:30).
Moses was on Mount Sinai for 40 days and 40 nights (Exodus 24:18). Moses interceded on Israel's behalf for 40 days and 40 nights (Deuteronomy 9:18, 25). The Law specified a maximum number of lashes a man could receive for a crime, setting the limit at 40 (Deuteronomy 25:3).
The Israelite spies took 40 days to spy out Canaan (Numbers 13:25). The Israelites wandered for 40 years (Deuteronomy 8:2-5). Before Samson's deliverance, Israel served the Philistines for 40 years (Judges 13:1).
Goliath taunted Saul's army for 40 days before David arrived to slay him (1 Samuel 17:16). When Elijah fled from Jezebel, he traveled 40 days and 40 nights to Mt. Horeb (1 Kings 19:8).
And virtually everyone knows that the Lord Jesus was tempted for 40 days in the wilderness, and that there were 40 days between His resurrection and His ascension.
In addition, I already noted yesterday that the prophet Jonah gave the people of Nineveh 40 days to repent before judgment would strike.

Many will dismiss the things that I have been pointing out about these eclipses as "coincidences", but it is imperative to remember that these sorts of solar eclipses are actually very rare.  The following comes from Faithwire...
But, with that said, there are some intriguing and defining elements surrounding the coming Aug. 21 event, including the fact that it is the first time since 1257 that the entirety of the total eclipse is exclusively viewable from inside the U.S.
Parade noted that the 1257 eclipse went over the Hawaiian Islands -- a fact that some might say differentiates it from what's to come this month.
With that in mind, to find a comparable eclipse, the outlet said one must go all the way back more than 1,500 years to July 29, 436 (yes, the year 436). And America won't see another such total solar eclipse that is viewable only in the U.S. until Jan. 25, 2316, when anyone currently reading this story is long gone.
For centuries, many have believed that a solar eclipse is a sign that judgment is coming upon a nation.  I don't know if that is what this solar eclipse means, but Jesus did warn us to watch for signs in the sun, moon and stars just prior to His return.
So does this solar eclipse start a period of "40 days and 40 nights" for America?
I don't know, but God definitely likes to use the number 40, and throughout history He has repeatedly used His calendar to get our attention.