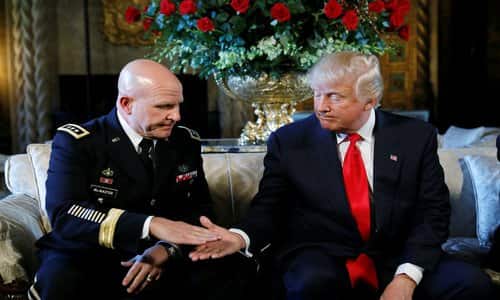 By Morton A. Klein/Algemeiner.com August 30, 2017
Share this article:
The Zionist Organization of America's August 2017 report detailed US National Security Chief General H.R. McMaster's troubling record regarding Iran, Israel and radical Islamist terrorism.
McMaster's statements and actions appear to be diametrically opposed to President Donald Trump's support for Israel, opposition to the Iran nuclear deal and determination to name and combat radical Islamist terrorism.
Critics of ZOA's report have failed to show that ZOA's report was wrong in any substantive respect. The criticisms have amounted to name-calling against ZOA, and McMaster's friends vouching for his character -- which is irrelevant to the vital policy issues addressed in ZOA's report.
McMaster reportedly wrongly refers to the existence of a Palestinian state before 1947 -- when no Palestinian state ever existed, and maligns Israel as an "illegitimate," "occupying power."

In fact, Israel's re-establishment in 1948 and her self-defensive capture of Judea/Samaria (West Bank) in 1967 were both legal under binding international law, and deprived no country of its sovereign territory.
McMaster wrongly claimed that President Trump would recognize "Palestinian self determination" during his visit to Israel; reportedly opposed President Trump's visit to Jerusalem's Western Wall, refused to state that the Western Wall is in Israel, and insisted that Israeli Prime Minister Benjamin Netanyahu could not accompany President Trump to the Western Wall.
And alarmingly, when Israel installed metal detectors at Jerusalem's Temple Mount after Palestinian terrorists smuggled in firearms and murdered two Israeli policemen, McMaster, according to a senior defense official, described this as "just another excuse by the Israelis to repress the Arabs."
In his short tenure at the National Security Council (NSC), General McMaster has fired or removed from the NSC six staunchly pro-Israel/anti-Iran officials: Steve Bannon; K.T. McFarland; Adam Lovinger; Rich Higgins, Derek Harvey and Ezra Cohen-Watnick.
McMaster quickly removed Bannon, architect of much of President Trump's pro-Israel, anti-Islamist terrorism agenda, from the Principals Committee of the NSC. McMaster also promptly removed K.T. McFarland, a key member of the team of Iran deal opponents originally assembled by President Trump, and a veteran pro-Israel national security professional in the Nixon, Ford and Reagan administrations.
She was shunted off to be ambassador to Singapore. Lovinger, a pro-Israel national security strategist from the Pentagon, was returned to the Pentagon with his security clearance revoked.

McMaster also sacked Iran "hawk" Rich Higgins, the NSC's director of strategic planning, after Higgins wrote a memo about personnel opposed to President Trump's foreign policy agenda.
McMaster removed Derek Harvey, senior director for the Middle East, who has been described by former Army Vice Chief of Staff General Jack Keane as "hands down the very best intelligence analyst that the United States government has on Iraq," after Harvey prepared a list of NSC Obama-era holdovers.
McMaster should have removed the personnel on Harvey's list -- but instead fired Harvey. And McMaster also fired Cohen-Watnick, a staunch opponent of the Iran deal, who sought to intensify efforts to counter Iran in in the Middle East and rein in officials opposed to the president's policies.
McMaster's replacements and appointees are on the wrong side of the issues of concern. McMaster appointed Colonel Kris Bauman, who has blamed Israel for Palestinian terror and urged Israel to negotiate with Hamas, to work on the Israel-Palestinian desk.
Bauman is working to revive General Jim Allen's defective and dangerous Obama-era plan for Palestinian statehood. McMaster also replaced K.T. McFarland with Dina Habib-Powell -- a defender of Huma Abedin and friend of pro-Iran-deal Obama era figures such as Valerie Jarett.
As PJ Media New York editor David Steinberg wrote: "One is hard-pressed to identify a member of the NSC brought in by McMaster with a history of aligning with President Trump on Iran or with his Mideast policy in general."

A White House official estimated that well over fifty percent of the NSC staff are Obama holdovers.
McMaster has also promoted certifying that Iran is in compliance with the Iran deal -- even though Iran: banned International Atomic Energy Agency (IAEA) inspectors from its Parchin nuclear facility; refused to allow IAEA investigators to interview Iran's nuclear scientists; and has repeatedly tested intercontinental ballistic missiles in violation of UN Security Council resolutions; and despite German intelligence reports that Iran is cheating on the deal.
And when pressed about Iran's violations, McMaster inaccurately and misleadingly stated that Iran is merely violating the Iran deal's "spirit." This flies the face of President Trump's promise to tear up or rigorously enforce the Iran deal and punish violations.
Mirroring the Obama administration's practices, McMaster opposes using the term "radical Islamic terrorism" or other indicia of terrorists' jihadist ideology.
It's notable that those who have castigated ZOA's detailed critique of McMaster have failed to refute a single ZOA concern. They merely condemned ZOA as wrong and scurrilous.
The most that any of ZOA's critics could offer was the "opinion" of anonymous Israeli officials that McMaster is a "friend" and that there is "no need to agree with every position McMaster has taken."
Another issue that's been ignored is why has a bevy of anti-Trump, anti-Israel activists and groups -- including CNN's Van Jones, Media Matters, and the Council on American-Islamic Relations (CAIR) -- leapt to Trump appointee McMaster's defense.
Yet they never leapt to defend the pro-Israel David Friedman's appointment as ambassador to Israel when he was criticized. Meanwhile, many strong supporters of Israel have supported ZOA's critique of McMaster's actions.
All of ZOA's critics have two things in common. They use ugly, nonsensical, vacuous name-calling ​to​ defend McMaster and they ​fail to ​refute a single issue of concern ZOA raised.
The critics'​ inability to address ZOA's​ numerous concerns only strengthens ZOA's​ case about McMaster's hostility to Israel and ​failure to take strong action against Iran and radical Islami​st​ terrorism.
Originally published by the Algemeiner.com - reposted with permission.