Germany: The Rise Of Islam 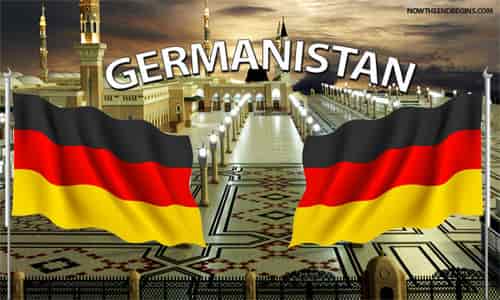 By Giulio Meotti/Gatestone Institute September 14, 2017
Share this article:
Jan Fleischhauer, a journalist of the weekly magazine Der Spiegel, coined an expression to define the free fall of German Christianity: Selbstsäkularisierung ("self-secularization"). It is the Church being liquidated.
The German Bishops' Conference just released the data on the decline of Catholicism in Germany for 2016. In one year, the German Catholic Church lost 162,093 faithful and closed 537 parishes. From 1996 to today, one quarter of the Catholic communities have been closed. "The faith has evaporated," said Cardinal Friedrich Wetter, the Archbishop of Munich and Freising from 1982 to 2007.
Christians in Germany will become a minority in the next 20 years, according to Die Welt. Around 60% of the country is currently Christian, with 24 million Catholics and 23 million Protestants. But that number is falling by 500,000 a year through deaths alone. "Those statistics are embodied by what visitors observe in German cities on Sunday: largely empty churches", the Catholic theologian George Weigel wrote.
German Protestantism is facing the same crisis. Die Zeit revealed that in 2016, 340,000 Protestants passed away, and there were just 180,000 baptisms. Some 190,000 people left the church and just 25,000 people chose to join it.

The next stage seems to be a German cultural and religious landscape dominated by atheists and two minority religions: Islam and Christianity. If the secularists do not take Western Christian heritage -- or at least the Judeo-Christian values from which it sprang -- more seriously and start defending it, both atheists and Christians will soon be dominated by the rising political and supremacist religion, Islam.
A prominent Muslim fundamentalist organization in Germany, banned by the federal government, calls itself "The True Religion" ("Die Wahre Religion"). They apparently think they are overtaking Judeo-Christian values.
There are dramatic instances of Christian decay in Germany. In the diocese of Trier, for example, site of the oldest Catholic community and the birthplace of Karl Marx, the number of parishes will drop from 903 to 35 by 2020, according to bishop Stephan Ackermann -- a decrease of more than 90%. In the diocese of Essen, more than 200 parishes have been closed; their number has fallen from 259 to 43.
A demographic decline is also involved in this religious crisis. "Christianity is literally dying in Europe," said Conrad Hackett, head of the researchers who drafted a Pew Forum report a few months ago. In Europe, between 2010 and 2015, Christian deaths outnumbered births by nearly 6 million. In Germany alone, there were about 1.4 million more Christian deaths.
This decline also apparent from the recruitment crisis for the priesthood. The official website of the German Catholic Church, noted in May that the dioceses of Osnabrück and Mainz did not receive any new priests this year. The archdiocese of Munich last year drew only one candidate.
Throughout the Archdiocese of Munich today, there are only 37 seminarians in the various training stages, for about 1.7 million Catholics. In comparison, the American diocese of Lincoln, Nebraska, currently has 49 seminarians for about 96,000 Catholics. In the U.S., Christianity is strong; in Germany it is literally dying.

A German architect, Joaquim Reinig, told Die Tageszeitung that to integrate Muslim immigrants better, churches should be demolished and replaced with "highly visible mosques". It might sound a bit crazy, but it contains a dramatic truth.
In his book The Last Days of Europe, the historian Walter Laqueur wrote that "Germany had some 700 little mosques and prayer rooms in the 1980s, but there are more than 2,500 at the present time". If, in Germany, Christianity is evaporating, Islam is proliferating.
The Turkish-Islamic Union for Religious Affairs (DITIB) just opened a new mega-mosque for worship in the German city of Cologne. The new German mega-mosque has a 1,200-person capacity and the tallest minaret of Europe. According to Deutsche Welle, "Christian leaders bristled at the idea of Cologne's famed Dom cathedral sharing the skyline with minarets".
When the mosque was planned in 2007, a citizens' initiative was launched to say that "we want the cathedral here, not minarets". The Muslim authorities then announced the plan to "double" the number of mosques.
The Turkish authorities not only wanted to build a mega-mosque in the city hosting the largest cathedral of Germany, but these also had the sense of irony to commission architect Paul Böhm to design the mosque. Böhm's father and grandfather were in fact the two most radical and admired church architects of their generations. In the "new Germany", nobody had asked Böhm to design a new cathedral.

Since he took power in Turkey, Recep Tayyip Erdogan has built 17,000 Islamic prayer sites there. The Turkish president is committed to the construction of mosques in European capitals as well. Turkey controls 900 mosques in Germany and feels free to say that a "liberal mosque" in Germany is "incompatible" with Islam, according to the daily Frankfurter Allgemeine Zeitung. That is why the 57 percent of Germans fear the rise of Islam in their country.
When Chancellor Angela Merkel opened her country to mass migration in 2014, she apparently did not see any cultural problem in accepting more than another million Muslims.
In the words of Erdogan, however, "Our minarets are our bayonets, our domes are our helmets, our mosques are our barracks". Islamic regimes are, in fact, offering to fill the empty spaces in Germany's religious landscape. Saudi Arabia proposed building 200 new mosques in Germany, "one for every 100 refugees".
Can you imagine Germany offering Iraq, Syria and Egypt to build "200 new churches" to reconstruct the derelict and dispossessed Christian communities there? No, because in the Middle East, Christians have been eradicated in a forced de-Christianization.
In Europe, Christians are also becoming extinct by a process of "self-secularization". We risk losing not only our churches, but more importantly, our cultural strength and even confidence in the values of our own civilization.
Originally published by The Gatestone Institute - reposted with permission.