Where is Your Bible? Is The Church Ignoring "The Oracles Of God"? 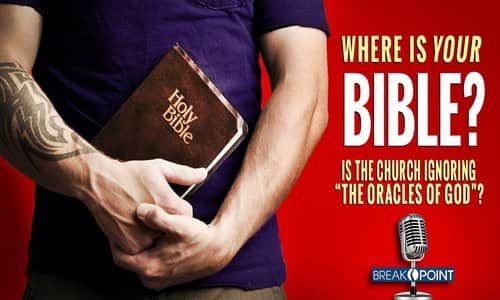 By Eric Metaxas/Breakpoint.org October 12, 2017
Share this article:
The KGB finally got what it wanted--the separation of church and Bible in the West--with disastrous results.
Two majors with the KGB stood over Gavin Ashenden, who was caught smuggling Bibles into the old Soviet Union during the eighties. Who were his contacts, and where were the Bibles going?
If Ashenden didn't cooperate, the KGB officers warned, he'd be convicted of smuggling gold bullion into the country--because of his gold wedding ring! Alas, this trumped up charge was no joke. The sentence was 20 years in a Siberian labor camp.
But Ashenden stood firm, and they finally let him go.

If only Christians in the West would do likewise when it comes to the Bible. Ashenden, who's an Anglican priest and a contributor to the BBC, was back in Russia this month and got an earful from some of the Russian people, who accused Western Christians of capitulating to secular culture, especially when it comes to the redefinition of marriage.
They told him "we have lived under the dead weight of atheist secularism, and we know how empty and dangerous it is to human flourishing."
In "Anglican Ink" Ashenden notes that when the Marxists took control of Russia a century ago, they first set their sights on Christians and the churches--and they're doing it again. As before, he adds, "The cultural and political screws are slowly tightening against those who do read the Bible and keep faith with it in the public space."
Tragically, many Christians--or at least those who identify as Christians--have given up the Bible, which Ashenden calls "the bedrock of the church"--without a whimper of protest. A recent survey says that 60 percent of the members of the Church of England "never" read the Bible--that's right, never.
It's little wonder that so many churches there are dying. As Ashenden notes, "Only the Bible challenges the claims of secularism."

According to researchers George Gallup and Jim Castelli, biblical illiteracy is running rampant on this side of the Pond, too. Fewer than one in two adults can name the four Gospels. Many Christians cannot name more than two or three of Jesus's disciples. They say America is "a nation of biblical illiterates."
No wonder our culture is awash in confusion. What Amos wrote centuries ago is just as true in our day: " 'The time is surely coming,' says the Sovereign LORD, 'when I will send a famine on the land--not a famine of bread or water but of hearing the words of the LORD.' "
That was a word of judgment--to the people of Israel and to us today.
We miss out on so much when we fail to tap the Bible's power. Charles Spurgeon once said, "If you wish to know God you must know his word; if you wish to perceive his power you must see how he worketh by his word; if you wish to know his purpose before it is actually brought to pass you can only discover it by his word."
In this, the 500th anniversary of the Protestant Reformation--which gave the Word of God back to the people, proclaimed it as the final authority in the Christian life, and unleashed its liberating power in society--it is a scandal that so few Christians read it.

Our worldview is rooted in the Bible. We would not know God, our Savior, or our purposes in this world as beings made in God's image without it. So let's get back into it--not with grousing, but with gratitude.
At Queen Elizabeth II's coronation, she was presented with a Bible and told, "Here is Wisdom; this is the Royal Law; these are the lively Oracles of God." If we believe that, as the KGB certainly did, let's tap that lively power--starting today!
Originally published at Breakpoint.org - reposted with permission.