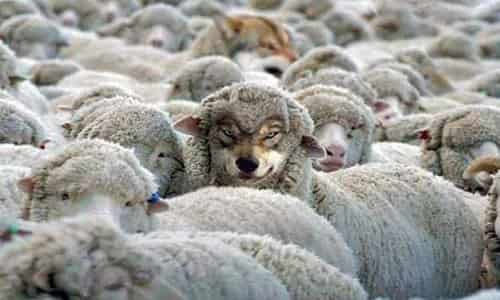 By PNW Staff October 16, 2017
Share this article:
The Book of Matthew warns us to "Beware of false prophets, which come to you in sheep's clothing, but inwardly they are ravening wolves." No one is surprised when a gender radical activist or an ISIS imam advocates polyamory nor are they shocked when an abortion rights activist promotes the murder of the unborn.
It is expected that an atheist will reject any notion of the concept of hell or a universalist who says there are many paths to Heaven. But what happens when that same infamous clamor comes from professed Christian leaders?
Here are just four of the so-called Christian leaders today whose starkly heretical positions are currently dividing Christian communities with unBiblical beliefs that undermine the faith:

Jeff Hood: Most heresies are rooted in a shred of truth that their purveyors then twist into something obscene, and such is the case with Jeff Hood, a Baptist minister in Texas who focuses on God's infinite love for the world. He preaches that God is polyamorous, as were the disciples, contending that we should be too. The Trinity, according to Hood, as an example of a polyamorous relationship in a gross equivocation that places the divine Trinity alongside human sexual perversion.
He is quoted as saying, "The Holy Trinity is a polyamorous relationship. You can't talk about the level of intimacy and ecstasy that these three beings are constantly experiencing without defining their relationship in such a way. Their love has always been and will always be a shared phenomenon.
We should spend our lives making sure that the love of polyamorous individuals is never denied and always protected. The Holy Trinity demands it." He has also published on his website his belief that Christ's twelve disciples were involved in "some sort of polyamorous relationship" and that "Not only is polyamory a positive thing, I think it's a holy thing."
Shannon Johnson Kershner: The belief that Christ is not the only way to salvation is not a new heresy, but instead a variation on the Universalism Heresy now promoted by the Reverend Kershner of Chicago's 5,500-member Fourth Presbyterian Church. In a recent podcast with the Chicago Sun-Times, the question was put to her bluntly, "Is Christianity the only way to get to Heaven?" to which she replied "No."
She went on to explain, "God's not a Christian. I mean, we are ... For me, the Christian tradition is the way to understand God and my relationship with the world and other humans and it's the way for me to move into that relationship but I'm not about to say what God can and cannot do in other ways and with other spiritual experiences."

Yet as comforting for Rev. Kershner's belief might be that believers of all religions may be saved, such a belief is also not Biblical. John 14:6 bring us a conversation in which Jesus says to His disciples, "I am the way, the truth, and the life: no man cometh unto the Father, but by Me."
Yet it is important to note that Rev. Kershner is not alone among her fellow Presbyterian Pastors, 45% of whom were recently revealed not to believe that only followers of Christ can be saved. How easy it is for members of the Fourth Presbyterian Church to think themselves Christian no matter what they believe, yet unfortunately at the peril of their souls.
Elizabeth Eaton: Another 'Christian' leader eager to deliver good news, the presiding "bishop" of the Evangelical Lutheran Church of America (ELCA) has expressed her belief that although Hell may exist, it is entirely empty because "God doesn't give up on those who reject Him." The statement came from a recent interview for a podcast "Face to Faith".
She said in the interview, "if we take a look at salvation history, ever since we got booted out of the garden, it has been God's relentless pursuit to bring His people to God," and that given eternity, God will continue working on everyone until eventually they will be saved.
The bishop dismisses Biblical evidence against her position simply by saying that Lutherans aren't "literalists" as she confuses parables with clear theological statements such as Matthew 25 which tells us that the wicked "shall go away into everlasting punishment, but the righteous into life eternal."

How disconcertingly comforting to believe that no matter what we believe, no matter how evil our actions on Earth and no matter how strong our rejection of God, that there will always be a paradise waiting for us in Heaven.
Millie Horning Peters: As if embracing a belief system so wide, liberal and inclusive that it ceases to be Christian at all isn't enough, the Reverend Millie Horning Peters of a Kentucky United Methodist church has gained fame as the leader of a pro-abortion group.
She believes that Christian leaders should actively promote abortions and assist women in obtaining them. Her actions have followed her preaching as she has spoken at pro-abortion rallies, testified in support of laws allowing abortion and lead her parishioners in volunteering as abortion clinic escorts and driving women to abortion clinics.
She believes that "It's time for the religious left to rise up" in support of abortion. She has accepted a position as the chair of the Kentucky Religious Coalition for Reproductive Choice. Could there be anything more diabolically deceptive that one who calls herself a Christian leader and yet promotes the murder of unborn children?