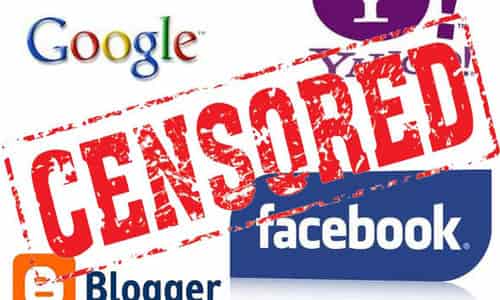 By Benjamin Weingarten/Gatestone Institute October 27, 2017
Share this article:
For the past few years, large social media and other online companies have been seeking to restrict or even criminalize content that could be construed as critical of Islam or Muslims, including when the material simply exposes the words and actions of radical Islamists.
The recent attempt by the digital payment platform, PayPal, to forbid two conservative organizations -- Jihad Watch and the American Freedom Defense Initiative -- from continuing to use the service to receive donations, is a perfect case in point. Although PayPal reversed the ban, its initial move was part of an ongoing war against the free speech of counter-jihadists -- those working to expose the ideology, goals, tactics and strategies of Islamic supremacists, and who are trying to defeat or at least to deter the Islamic supremacist global agenda.
Examples of this kind of censorship abound. In October 2016, for instance, conservative radio host and author Dennis Prager's "PragerU" -- which produces five-minute clips presented by leading experts in the fields of economics, politics, national security and culture -- announced that more than a dozen of its videos were facing restricted access on YouTube, a subsidiary of Google. In theory, this meant that users who employed the filter for sexually explicit or violent content would be blocked from it.
Among these restricted videos however, were six relating to Islam: "What ISIS Wants," presented by Tom Joscelyn, Senior Fellow at the Foundation for Defense of Democracies; "Why Don't Feminists Fight for Muslim Women?" presented by Ayaan Hirsi Ali, fellow at Stanford's Hoover Institute and Harvard's Belfer Center; "Islamic Terror: What Muslim Americans Can Do," presented by Khurram Dara, a Muslim American activist, author and attorney; "Pakistan: Can Sharia and Freedom Coexist?" and "Why Do People Become Islamic Extremists?" presented by Haroon Ullah, a foreign policy professor at Georgetown University; and "Radical Islam: The Most Dangerous Ideology," presented by Raymond Ibrahim, author of The Al Qaeda Reader.

PragerU is now pursuing legal action against Google/YouTube, having just filed a potentially major precedent-setting suit against the internet giant in U.S. District Court in California on grounds that Google/YouTube is allegedly discriminating against and censoring PragerU's videos based on the entity's conservative political identity and viewpoint.
PragerU is not alone in having its content -- presented by reputable thinkers -- treated by social media companies as comparable to pornography, or similarly inappropriate or offensive material. For instance:
In January 2015, a mere two weeks after Facebook CEO Mark Zuckerberg penned a #JeSuisCharlie statement in defense of free speech -- in the wake of the Islamist terrorist attack on the Paris-based satirical journal Charlie Hebdo -- Facebook censored images of the prophet Muhammad in Turkey.
In January 2016, the Facebook page "Justin Trudeau Not," which contained content critical of the Canadian prime minister's views on Islamic supremacism, was deleted by Facebook as a "violation of community standards." The offense? The page's authors "contrasted Trudeau's immediate condemnation of a pepper spray attack against Muslims in Vancouver with his complete refusal to address a firearm attack by Muslims in Calgary."
In May 2016, the administrator of a pro-Trump Facebook group was banned from Facebook for posting: "Donald Trump is not anti-Muslim. He is anti ISIS. What Trump is trying to say is that Homeland Security cannot differentiate which Muslim is [a] radical wanting to cause harm and which is a harmless refugee. Who is willing to sacrifice their family's safety for the sake of political correctness? Are you?"
In June 2016, YouTube removed a video -- "Killing for a Cause: Sharia Law & Civilization Jihad" -- elucidating the aim of Islamic supremacists to subvert the West from within.
Also in June 2016, Facebook suspended the account of Swedish writer Ingrid Carlqvist for posting a video, produced by Gatestone Institute, on "Sweden's Migrant Rape Epidemic." After Gatestone readers responded critically to the censorship, the Swedish media started reporting on the case, and Facebook reinstated the video, without any explanation or apology.
In May 2017, Jayda Fransen, the deputy leader of Britain First, a party "committed to the maintenance of British national sovereignty, independence and freedom," was banned from Facebook for 30 days for "repeatedly posting things that aren't allowed on Facebook."
The post that reportedly triggered the temporary ban was a meme quoting the passage from the Koran: "O you who believe! do not take the Jews and the Christians for friends...Allah does not guide the evildoers."
Also in May 2017, Facebook blocked and then shut down the pages of two popular moderate Muslim groups -- managed and followed by Arabs across the world who reject not only violence and terrorism, but Islam as a religion -- on the grounds that their content was "in violation of community standards."
In August 2017, a YouTube channel containing a playlist of videos featuring best-selling author and scholar Robert Spencer, the director of Jihad Watch, was removed for a supposed violation of the platform's "Community Guidelines."
Later in August 2017, the Independent reported that Instagram, Twitter and YouTube allegedly had been cooperating with the Iranian regime to block or censor "immoral" content.

In the past year, social media companies have been editing their user guidelines to broaden the scope of the type of content that may be flagged for removal. These necessarily end up targeting content and users that counter the use of jihad, or war in the service of Islam. Examples of this procedure include the following:
In September 2016, YouTube released new "Advertiser-friendly content guidelines," according to which: "Video content that features or focuses on sensitive topics or events including, but not limited to, war, political conflicts, terrorism or extremism, death and tragedies, sexual abuse, even if graphic imagery is not shown, is generally not eligible for ads.
For example, videos about recent tragedies, even if presented for news or documentary purposes, may not be eligible for advertising given the subject matter." It is easy to see how such rules could be used against people trying to counter jihad.
In March 2017, Google revealed that it was seeking to improve its search function by having its 10,000 "quality raters" flag "upsetting-offensive" content. The data generating the quality ratings will then be incorporated into Google's algorithms for monitoring and forbidding content.
Two months later, Google updated the guidelines for "non-English-language web pages." One example cited by Google as "upsetting-offensive" is a post titled "Proof that Islam is Evil, Violent, and Intolerant - Straight from the Koran..." In contrast, Google calls a PBS Teachers Guide on Islam a "high-quality article...with an accurate summary of the major beliefs and practices of Islam."
In August 2017, YouTube posted "An update on our commitment to fight terror content online," which is sure to put counter-jihadist content in its crosshairs:
"We have begun working with more than 15 additional expert NGOs and institutions through our Trusted Flagger program, including the Anti-Defamation League, the No Hate Speech Movement, and the Institute for Strategic Dialogue.
These organizations bring expert knowledge of complex issues like hate speech, radicalization, and terrorism that will help us better identify content that is being used to radicalize and recruit extremists. We will also regularly consult these experts as we update our policies to reflect new trends. And we'll continue to add more organizations to our network of advisors over time...We'll soon be applying tougher treatment to videos that aren't illegal but have been flagged by users as potential violations of our policies on hate speech and violent extremism.
If we find that these videos don't violate our policies, but contain controversial religious or supremacist content, they will have some features removed. The videos will remain on YouTube behind an interstitial, won't be recommended, won't be monetized, and won't have key features including comments, suggested videos, and likes."
It bears noting here that one group cited above -- the ADL -previously negatively flagged and profiled various counter-jihadist individuals and organizations. This is in keeping with the political slant of its new president, Jonathan Greenblatt, who has taken the organization in a decidedly left-leaning direction.
That major technology companies are openly stifling the free speech of people trying to counter jihad is bad enough; what is beyond unconscionable is that they simultaneously enable Islamic supremacists to spread the very content that the counter-jihadists have been exposing. It is a practice that the Shurat HaDin-Israel Law Center is actively engaged in battling through litigation.