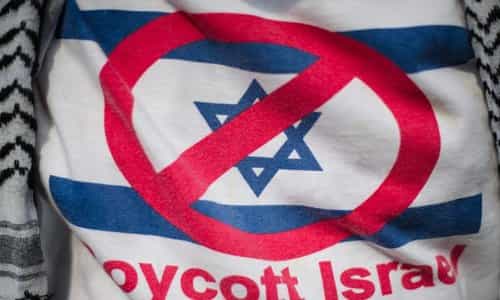 By Susan Warner/Gatestone Institute March 15, 2016
Share this article:
On May 10, 2016, the General Conference of the United Methodist Church (UMC) will gather at the Oregon Convention Center, hosting thousands of Methodist leaders, delegates and visitors.
This leading policy-making event meets once every four years to revise church law and adopt resolutions on current moral, social, public policy and economic issues. The conference also approves plans and budgets for church-wide programs.

This year, four new proposals in support of the anti-Israel Boycott, Divestment and Sanctions (BDS) movement are being prepared for consideration of the general assembly during the 10-day event.
UMC is following in the footsteps of the Presbyterian Church (USA), the United Church of Christ and the United Church of Canada, who all passed resolutions boycotting and divesting from the State of Israel. The Methodists, however, are not waiting for their General Conference to get the ball rolling. In January, the UMC pension fund, last valued in 2014 at $20.9 billion, voted in favor of divesting from five Israeli banks.
According to US News and World Report,
"The pension board's decision came at a time when divestment is gaining momentum among liberal Protestants as a tool to pressure Israel over its policies toward Palestinians. Last year, the United Church of Christ voted to divest from companies with business in the 'Israeli-occupied' territories. The Presbyterian Church (USA) took a similar vote in 2014."
UMC, which represents 13 million members worldwide, is marching to the tune of the BDS drummer, banging away at the same tired anti-Israel melodies that falsely target Israel as an "evil, colonialist, imperialist" empire whose "illegal occupation of Palestinian lands" and its "apartheid" discriminatory behavior is unjustly directed against the civil rights of the "suffering Palestinians."
The Methodists, along with influential and forceful factions, hope to satisfy their Palestinian and EU partners by censuring Israel. Further, in a sort of blundering naiveté, UMC is ignoring what is surely inevitable: the very divestment they ostensibly imagine will stop the conflict between Israel and the Palestinians may actually serve to exacerbate it.
The question then is raised: Is continuing the conflict in order to wound Israel what the Church actually wants? The answer, it appears, is a resounding yes. With the help of a well-oiled grassroots Methodist organization, the United Methodist Kairos Response (UMKR), the BDS agenda is successfully being pushed through the Church.
UMKR borrows its name from the Kairos Palestine Document. Drafted in 2009, the document was created by a group of Christians who invoked God's name as part of their claim to His alleged favor in their war for "justice and peace" against Israel's "occupation of Palestinian land."
UMKR claims to be answering the calls of Palestinian Christians to "help end the Israeli occupation." They exploit the boycott as a justifiable and effective strategy to force Israel to stop what they call the "illegal occupation of Palestinian lands."
The Methodist organization publicly opposes anti-BDS legislation in the United States, stating that these legislative efforts "contradict the United Methodist Church's longstanding policies of supporting economic advocacy as well as calling for an end to the Israeli occupation."
The term "illegal occupation" is repeated so regularly by UMKR and other anti-Israel organizations that international media has used the phrase as an accepted term to describe the situation in Israel. A manifestation of "the big lie" against Israel, UMKR forcefully and repeatedly disseminates this false accusation. The entire UMKR website is peppered with references and claims of "illegal Israeli settlements."
However, the accusations don't stop there. Susanne Hoder, co-chair of UMKR, has gone on the record accusing Israel of ethnic cleansing against all non-Jews in Israel. In an editorial she wrote, Hoder characterizes Israel as "a society obsessed with the ethnic purity and intent on purging non-Jews from the region." In a second article, Hoder calls on "followers of Christ" to "unite against Israel's ethnic cleansing of Christians and Muslims."
Accusing Israel of "ethnic cleansing of Christians and Muslims" is a preposterous and unfounded claim. Israel, the only democracy in the volatile Middle East region, is the one place people of all races and religions can live freely. Christians are not beheaded for their faith in Israel, unlike Christians living in areas controlled by ISIS. Women are not treated as second-class citizens, like in Iran and Saudi Arabia.
Hoder's allegations against Israel highlight a greater problem of the UMKR and anti-Israel groups in general. UMKR is focusing all their attention on Israel, without acknowledging the misdeeds of the real perpetrators of the Mideast conflict. Why do the Methodists not hold the Palestinian leadership, who fail repeatedly to condemn and even encourage terrorism against Israel, accountable?

The UMKR's anti-Israel strategy, including boycott and divestment maneuvers, is a multi-faceted campaign that includes tourism, lobbying, communications and education to undermine Israel. Each "department" espouses a divestment agenda along with an action program that undergirds its mission with a narrative of lies, innuendo and delegitimization of Israel. Palestinian responsibility for the conflict is completely ignored.
A quick look at the UMKR website features fictionalized maps of Israel that other religious groups call "false, misleading and harmful." These are the same maps used by the international BDS movement, the Presbyterian Church (USA) and other demonizers of Israel to "educate" and brainwash their brethren with a false, revisionist history of the region.
The UMKR website also features an impressive, if frightening, list of Christian groups that partner and collaborate with the organization. The list reads like a "who's who" of Israel-hate groups, including anti-Israel NGO's, Jewish, Catholic and Protestant organizations, student groups and Palestinians businesses and government-affiliated institutions. Most of these groups are also signatories of the Kairos Palestine Document.
Among the highest profile partners of the UMKR divestment agenda are the World Council of Churches and Sabeel.
The World Council of Churches, with its Orthodox Catholic and mainline Protestant members, is mainly rooted in what scholars call "Supersessionism," a 2,000-year-old doctrine that claims that because Israel and the Jews did not accept Jesus as the Messiah, they have been sidelined by God and "replaced" by the Christian Church.
Sabeel is a Protestant Palestinian Liberation Theology organization based in Israel. One of the more extreme aspects of their ideology is claiming Jesus was a "Palestinian". Friends of Sabeel groups include Christians and secularists throughout North America. They sponsor tours and Christian conferences in which they augment their regular appeals for Palestinian peace and justice with an abundance of false allegations against Israel.
As the UMKR readies its forces for the May UMC General Conference, there will likely be some attempts to defeat their BDS agenda. Some opposition will likely come from Jewish watchdog groups rather than Christian advocacy groups. However, Dexter Van Zile, a Christian media analyst and close observer of the BDS movement in churches, offers insight into opposition stemming from African Methodists, telling Gatestone Institute:
"Not all is lost. Many of the delegates to the General Conference come from Africa. They have witnessed jihad up close and personal and will likely have a much more sympathetic view of Israel's predicament than many of the delegates who live in the relative safety of the United States. Their participation at the upcoming conference may obstruct the passage of any divestment resolutions."
A stunning report written by Dr. Harold Brackman, of the Simon Wiesenthal Center, states:
"The BDS Movement has already fulfilled part of its potential -- as a stalking horse for those seeking to destroy Israel by other means .... It's committed not to peace but to a piecemeal elimination of Israel -- not to non-violence but to blackmail. It doesn't believe in its own distinctions between 'targeted' and 'total' boycotts."
Brackman adds that
"those truly committed to a 'Two State Solution' will never serve the cause of peace by embracing the anti-Semitic BDS. Honest people have a choice between two options only: a return to currently unfashionable, always difficult, peacemaking to forge two viable, peace states or the grim alternative, stripped bare of pretenses, of a deadly specter astride a Pale Horse."
The BDS movement is a real crime. It is not the hoped-for movement towards peace and justice, but rather a way to demonize and disarm Israel by warping public opinion. The United Methodist Church and its anti-Israel counterparts have put Israel's neck on the chopping block of history for crimes it did not commit.
Originally Published by Gatestone Institute. Reposted with permission.