Why the Masterpiece Cake Case Matters To All Americans 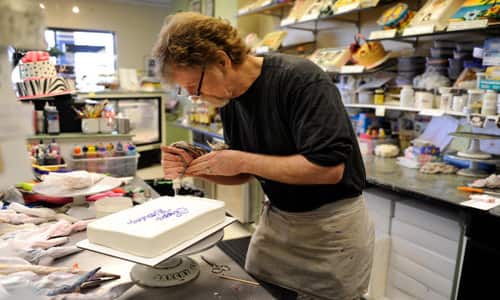 That is the big question the Supreme Court will be answering next week when it hears the Masterpiece Cakes case involving Christian baker Jack Phillips.
The Alliance Defending Freedom, which is defending Phillips, has pointed out that: 1) "Jack does not discriminate," and he was perfectly happy to sell the gay couple, who subsequently took him to court, cookies and brownies and anything else pre-made off of his shelves;
2) "Jack has turned down other cakes in the past," including Halloween cakes and lewd cakes;
3) "Jack has faced anti-religious bigotry as well as threats and intimidation simply because he declined to promote an event," so he is the one being singled out for unfair treatment;
4) "Jack owns a private family business, and he doesn't give up his rights when he sells his art," and by calling his business "Masterpiece Cakes," he is making clear that for him, they are works of art;
5) accordingly, "Jack's shop has been called an 'art gallery of cakes'"; and
6) "Wedding cakes made up about 40 percent of Jack's business," and these are all custom designed. But due to Colorado's laws and legal rulings to date, he has had to drop this part of his business entirely.
Now, common sense would say that this case should be a no-brainer, a slam-dunk win for Jack Phillips and his attorneys. And in principle, I agree.
The problem, however, is that "gay rights" have been exalted to such a degree that these "rights" trump all other rights and freedoms, including our freedoms of conscience, speech, and religion.
In the case at hand, because Phillips is a committed Christian, he doesn't make cases mixed with alcohol (nor can he be required to), he doesn't make cakes for lewd bachelor parties (nor can he be required to), and he doesn't make cakes for horror-themed events (nor can he be required to).
But when he cannot, in good conscience, use his artistic skills to make a cake for a same-sex "wedding," he can be charged with violating the state's anti-discrimination laws to the point that the state can now discriminate against him as a Christian.
Put another way, you can freely exercise your Christian beliefs unless those beliefs offend gays. In that case, you're breaking the law.
And what if a Hindu came in and wanted a, "Krishna is Lord" cake? Phillips could politely decline, without legal penalty or pressure. The same with a Muslim baker declining to bake a cake for a Christian with the words, "Jesus is Lord."
But wouldn't that offend the Hindu and the Christian wanting to buy the cakes? Perhaps so, but the bakers are rightly protected by the law and cannot be penalized for refusing the business.
Why, then, are gays and lesbians treated differently? Why are they put in a special category?
The sympathetic answer would be that society has overcompensated for perceived past injustices. And so, the pendulum has swung from one side (mistreatment of gays and lesbians) to the other side (overprotection of gays and lesbians).
The more realistic answer is that some gay activists have always had as their ultimate goal the silencing of those who resist their cause.

As I've said for more than a decade, those who came out of the closet want to put us in the closet. And as a Christian attorney once commented to me, "Those who were once put in jail want to put us in jail."
In the days ahead, many on the left will argue that Phillips was guilty of discriminating against gay customers. But that is a complete misrepresentation of the facts, and if the Supreme Court finds him guilty, the implications for America will be massive.
It will mean that the highest court in the land has ruled that, in virtually all conceivable cases, gay rights trump religious rights. And it will mean that Christians in particular can be forced to violate their consciences and their deeply held, historic beliefs under penalty of law, with the real potential of losing their very livelihoods.
And should they still refuse to comply, it could mean a jail sentence too.
While some on the left (including LGBT activists) will say, "This is not what we intended," plenty of others will gloat. After all, if we deserved to be thrown to the lions in one generation, it's no big deal to imprison us in another generation.
I'm hoping that the Supreme Court does the right thing. If not, my leftist readers may mock my words today but you will mark them tomorrow.
Originally published at AskDrBrown.org - reposted with permission.