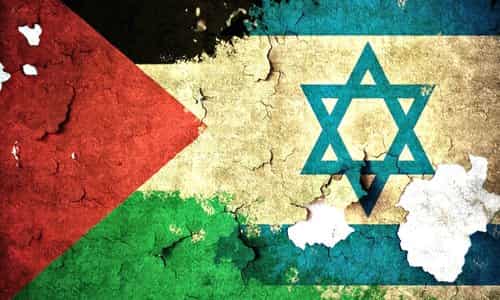 By David Harris/Algemeiner.com December 29, 2017
Share this article:
In all the discussion about the Israeli-Palestinian conflict -- and the quest for a solution -- some basic facts are too often missing, neglected, downplayed or skewed.
Not only does this do a disservice to history, but it also contributes to prolonging the conflict by perpetuating false assumptions and mistaken notions.
Consider:
Fact #1: There could have been a two-state solution as early as 1947. That's precisely what the UN Special Committee on Palestine (UNSCOP) proposed. Two states, recognizing the presence of two peoples -- and two nationalisms -- in a territory governed temporarily by the United Kingdom.

And the UN General Assembly decisively endorsed the UNSCOP proposal. The Jewish side pragmatically accepted the plan, but the Arab world categorically rejected it.
Fact #2: When Israel declared independence on May 14, 1948, it extended the hand of friendship to its Arab neighbors, as clearly evidenced by its founding documents and statements.
That offer, too, was spurned. Instead, five Arab armies declared war on the fledgling Jewish state, seeking its total destruction. Despite vastly outnumbering the Jews and possessing superior military arsenals, they failed in their quest.
Fact #3: Until 1967, the eastern part of Jerusalem and the entire West Bank were in the hands of Jordan, not Israel. Had the Arab world wished, an independent Palestinian state, with its capital in Jerusalem, could have been established at any time. Not only did this not happen, but there is no record of it ever having been discussed.
To the contrary, Jordan annexed the territory, seeking full and permanent control. It proceeded to treat Jerusalem as a backwater, while denying Jews any access to Jewish holy sites in the Old City, and destroying the synagogues there. Meanwhile, Gaza was under Egyptian military rule. Again, there was no talk of sovereignty for the Palestinians there, either.
Fact #4: In May 1967, the Egyptian and Syrian governments repeatedly threatened to annihilate Israel, as these countries demanded that UN peacekeeping forces be withdrawn from the region. Moreover, Israeli shipping lanes to its southern port of Eilat were blocked, and Arab troops were deployed to front-line positions. The Six-Day War was the outcome -- a war that Israel won.
Coming into possession of the Gaza Strip, Golan Heights, Sinai Peninsula, West Bank and eastern Jerusalem, Israel extended feelers to its Arab neighbors, via third parties, seeking a "land for peace" formula.

The Arab response came back on September 1, 1967, from Khartoum, Sudan, where the Arab League nations were meeting. The message was unmistakable: "No peace with Israel, no recognition of Israel, and no negotiations with Israel." Yet another opportunity to end the conflict had come and gone.
Fact #5: In November 1977, Egyptian President Anwar Sadat broke with the Arab rejectionist consensus. He traveled to the Israeli capital of Jerusalem to meet with Israeli leaders, address Israel's parliament and speak of peace.
Two years later, underscoring the lengths to which Israel was prepared to go to end the conflict, a deal was reached, in which Israel -- led, notably, by a right-wing government- yielded the vast Sinai Peninsula, with its strategic depth, oil deposits, settlements and air bases, in exchange for the promise of a new era in relations with the Arab world's leading country.
In 1981, Sadat was slain by the Muslim Brotherhood for his alleged perfidy -- but his legacy of peace with Israel, thankfully, has endured.
Fact #6: In September 1993, Israel and the Palestine Liberation Organization (PLO) reached an agreement, known as the Oslo Accords, offering the hope for peace. But eight months later, PLO Chairman Yasser Arafat confirmed the suspicions of many that he was not honest, when he was caught on tape in a Johannesburg mosque asserting that the agreement was nothing more than a temporary truce until final victory.
Fact #7: In 1994, Jordan's King Hussein, following in the footsteps of Egyptian President Sadat, reached an agreement with Israel, again demonstrating Israel's readiness for peace -- and willingness to make territorial sacrifices when sincere Arab leaders come forward.

Fact #8: In 2000-1, Israeli Prime Minister Ehud Barak, leading a left-of-center government and supported by the Clinton administration, offered a groundbreaking two-state arrangement to Arafat, including a bold compromise on Jerusalem.
Not only did the Palestinian leader reject the offer, but he shockingly told Clinton that Jews never had any historical connection to Jerusalem, gave no counter-offer, and triggered a new wave of Palestinian violence that led to more than 1,000 Israeli fatalities (proportionately equivalent to 40,000 Americans).
Fact #9: In 2008, three years after Israeli Prime Minister Ariel Sharon unilaterally withdrew all Israeli soldiers and settlers from Gaza -- only to see Hamas seize control and destroy another chance for co-existence -- Israeli Prime Minister Ehud Olmert went even further than Barak in extending an olive branch to the Palestinian Authority.
He offered a still more generous two-state proposal, but got no formal response from Mahmoud Abbas, Arafat's successor. A Palestinian negotiator subsequently acknowledged in the media that the Israeli plan would have given his side the equivalent of 100 percent of the disputed lands under discussion.
Fact #10: At the request of the Obama administration, Israeli Prime Minister Benjamin Netanyahu agreed to a 10-month freeze on settlement-building in 2010, as a good-faith gesture to lure the Palestinians back to the table. Regrettably, it failed. The Palestinians didn't show up.
Instead, they have since continued their strategy of incitement, attempts to bypass Israel, and face-to-face talks, by going to international organizations instead; denial of the age-old Jewish link to Jerusalem and, by extension, the region; and by providing lifetime financial support for captured terrorists and the families of suicide bombers.
Isn't it high time to draw some obvious conclusions from these facts -- to recognize the many lost opportunities to reach a settlement because of a consistent "no" from one side -- and to call on the Palestinians to start saying "yes" for a change?
Originally published at Algemeiner.com - reposted with permission.