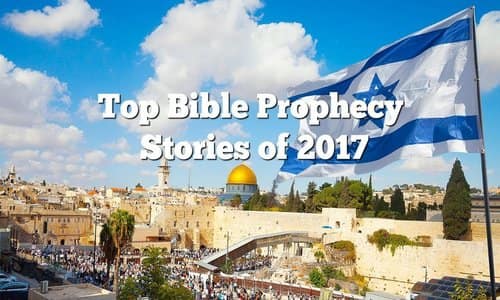 By Jan Markell/Olivetreeviews.org December 29, 2017
Share this article:
Pieces of the eschatological puzzle continue to manifest daily. Even signs that are primarily Tribulation events are casting a shadow today. As I perused news stories of the year, I selected 15 items that tell us time is short. The King is coming soon. Don't ever doubt that.
1. Jerusalem became a greater "burdensome stone" with Donald Trump's acknowledgement that this is truly Israel's capital and holy city. See Zechariah 12:3. Greater controversy will surround her in the year ahead.
2. The Gog-Magog alliance went on fast-forward. Iran, Turkey, and Russia are uniting with a primary goal in mind -- coming against Israel as foreshadowed in Ezekiel 38-39. Turkey's Erdogan threatened to "wipe out all Jews" after the Jerusalem announcement.

3. A new false god came on the scene and many hailed its arrival. An ex-Google executive is founding a church where artificial intelligence will be worshiped.  It's called AI for short and keep your eyes on this in 2018.
4. The scoffing of eschatology went to a new level. Many said the announcement concerning Jerusalem was received well by many Christians only because it will hasten Christ's return.  Many who love prophecy have given up finding a church that will address this.
5. Tribulation Temple talk escalated after Donald Trump's announcement concerning Jerusalem.
6. One salacious scandal followed another in 2017 revealing that man's character now reflects the end-time warnings of Romans 1 and II Timothy 3.
7. Israel continued pounding targets in Syria foreshadowing the day when she will carry out the prophetic verse found in Isaiah 17:1 -- the destruction of Damascus.
8. The idea of micro-chipping is now so accepted that one news outlet said people will soon be eager to be micro-chipped. It was suggested that we will eagerly line up like dogs for a chip.
9. As predicted, evil is waxing worse and worse (II Timothy 3:13). Pagan gods are appearing in many places including at the U.N. The occult is more appealing than ever and Millennials are "spellbound" by the paranormal.

10. Lawlessness is growing and the 'spirit of Antichrist' seems to be poured out on the earth in greater ways this past year.  The Antifa movement is one illustration. George Soros is busier than ever in his waning years.
11. There has been an intensification of calling evil good (Isaiah 5:20). Islamic jihad proponent Linda Sarsour made threatening comments about President Trump yet almost became Time magazine's "person of the year." In the mind of the Left, Islam must be celebrated.
12. The world of technology has declared war on Christians and conservatives. Google, YouTube, Facebook, Twitter, and more, are pulling the plug or limiting righteous comments and ideology yet they often celebrate evil. This reached new levels in 2017.
13. The terms "peace and security" are used in the Bible in I Thessalonians 5:3. It is false peace and security. The term was used with greater intensity in the last year. Donald Trump has been heralded as the president who will bring Israel "peace and security." On December 18, Fox News said President Trump would bring peace and security around the globe. The President stated that he "has laid a pathway to peace and security in our world."

14. In spite of world turmoil, there is a greater "business-as-usual" atmosphere particularly in America. Since Donald Trump has been President, the Dow Jones Industrial Average has closed at record highs 82 times. The Bible suggests there will be such a comfortable time on earth when Christ returns in spite of the frequent "birth pangs" which have also been record-setting.
15. There is even more evidence that only Jesus ruling and reigning from Jerusalem will provide great government. It has become evident that mankind cannot drain a swamp filled with alligators and poisonous snakes!  Washington is corrupt to the core because mankind's heart is "desperately wicked" (Jeremiah 17:9).   Draining the swamp was a great campaign slogan but 2017 showed us that first man's heart must be made new.
We can look at a list like this and focus on " sighs of the times" rather than realize that they are " signs of the times." The pieces of the puzzle continue to fall into place. Nothing is falling apart but instead falling into place.
Because of the turmoil of our times, someone said that the future is not what it used to be. Not true. The future was foretold and is playing out with a precise script and a predictable end only because it is all outlined in scripture. We can watch it in high-definition color with surround sound and even in 3D.  We have front row seats!
The King is coming, perhaps today.
Originally published by Jan Markell at Olive Tree Ministries