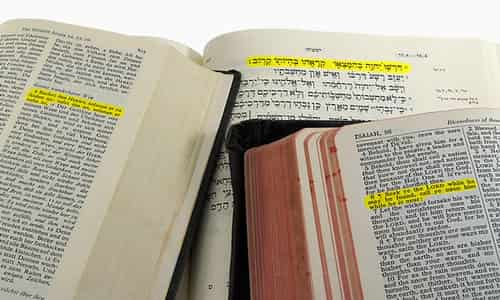 By Tom Olago March 16, 2016
Share this article:
What should Christians do when they find that the Gospel of Jesus Christ, or certain aspects of it, may cause offense to those to whom it is preached? One approach is to stick to delivering the Bible message without compromise, knowing that this approach is the only way to ensure a genuine choice between the truth and falsehood.

Another alternative would be to water down the message in order to make it palatable to its audience  even at the cost of distorting and misrepresenting central doctrines of the true Gospel such as the divine nature of Jesus, His virgin birth, His place in the Holy Trinity and how He was able to become incarnate as both the Son of God and the Son of man.
Such is the dilemma reportedly being faced by some Bible translators today.
Billy Hallowell for theblaze.com recently reported that Wycliffe Associates (WA), a group based in Orlando, Florida has announced that it would not be renewing its affiliation with Wycliffe Global Alliance (WGA), an international cohort of more than 100 translators that was formed back in 1991.
Bruce Smith, president of Wycliffe Associates, told staff and the public  via a press release  that there are a number of reasons why the translator has chosen to split from the group.
The first reason is the ongoing debate over the language used to describe Jesus and God. For Wycliffe Associates, literal translation of Father and Son of God is not negotiable, said Smith.
Hallowell explained that the issue reportedly hinged, more specifically, on the way in which the Biblical Trinity is presented to Muslims. He made reference to a similar Christianity Today report that some translations attempt to "soften" the language describing the relationship between Jesus and God so as to not confuse adherents of Islam who might incorrectly believe as a result of certain phrasing that God and Mary - Jesus mother - had sexual relations.
At least one past use of language to get around this problem referred to Christ as "the Beloved Son who comes (or originates) from God."
Here's how Christianity Today framed the debate back in 2011: "A dispute over the most faithful and effective way to render the common Biblical phrase 'Son of God' is dividing missionary from missionary, scholar from scholar, in a time of evident mistrust between Western Christians and Muslims."
"Son of God" scripture references are therefore said to be creating anxiety, especially when missionaries and evangelists sharing the Gospel with Muslim communities are concerned. Muslims have a different understanding of who Jesus is and would find any reference to Him as deity, whether in part or in full, both confusing and offensive from the perspective of the teachings of Islam.
The Biblical portrayal of Jesus as both the begotten Son of God and the Son of man, made possible by the virgin birth is also not consistent with Islamic doctrine and belief and could even be interpreted as blasphemous by Muslims.
Hence, some Bible translators have come up with a compromise: change the Biblical references to Jesus in ways that Muslims can relate to and accept. Give them that amended version, albeit less accurate, and hopefully, they will better understand and receive it - and still qualify for salvation following that understanding.
In the eyes of such translators, 'The beloved Son who comes from God'  which could, in essence, describe any child that God gives as a gift to man - becomes a socially acceptable alternative to "the Son Of God", deemed to be part and parcel of God Himself.
Other Bible translators cringe at the very thought of watering down the integrity and uniqueness of the Gospel to appease its target audiences. Little wonder, given that tampering with original meanings of scripture could make the difference between eternal life and death according to other Bible references such as I John 5:20:
"And we know that the Son of God is come, and hath given us an understanding, that we may know Him that is true, and we are in Him that is true, even in His Son Jesus Christ. This is the true God, and eternal life"
According to Sarah Zylstra for Christianity Today (CT), the debate isn't a new one. In 2012, Wycliffe USA pulled one controversial Bible translation from circulation and halted publication of several others after the 3-million-member Assemblies of God threatened to boycott the ministry over language concerns.
The World Evangelical Alliance (WEA) investigated, and in 2013 released new guidelines that translators should choose "the most suitable words in light of the semantics of the target language." For example, "qualifying words" such as "heavenly father" could be used for God and "eternal Son" for Jesus.
Another reason for WAs withdrawal from the alliance is its plan to provide free access to Bible resources to local churches as they work to translate the Bible. (The appropriateness of Bible copyrights is debated.)
"The local body of Christ has both the responsibility and authority as stewards of God's Word in their language," Smith stated. "WA supports the Churchs authority in Bible translation."
CTs Zylstra examined in depth how Bible translations that avoid the phrase Son of God are bearing dramatic fruit among Muslims, yet such a translation has some missionaries and scholars dismayed, according to a 2011 analysis of the matter by Collin Hansen for the CT.
The "Son of God" controversy was seemingly just the tip of the translation controversy iceberg. Hansen noted another of many contentious examples: whether Bible translations should use Allah to refer to God. Both sides make a compelling case.
Muslims understand Allah in terms of simple monotheism rather than the dynamic Trinitarian theology that Christians profess. Some translators have recovered the use of Allah in translations so that Muslims reading Scripture for the first time won't immediately reject the Bible as foreign to their culture.

Georges Houssney is the founder-director of Horizons International, a missionary agency involved in preaching, teaching, and discipling Muslims. Local Middle Eastern church leaders were said to have vehemently protested his writing of a 32-page booklet called "The Greatest Event in Palestine," published in 1974.
Hansen further explained that the booklet, which combined the birth narratives of Jesus from the Gospels of Matthew and Luke, referred to Jesus as Isa and rendered "Son of God" as habibi Allah ("beloved of God").
The church leaders protesting offered several reasons:
1. They saw the booklet's terminology as conceding too much to Islam. It threatened to confuse both Muslims and Christians, especially new believers who struggled to adjust to a more literal translation used in churches.
2. They believed it would embolden Muslim apologists who teach that the Bible has been tainted due to translations that differ in significant ways.
3. Others pastors said Muslim apologists would notice that translators had borrowed phrases from the Qur'an and would claim that this proved the Qur'an's superiority to the Bible. Or that Muslims would regard the translation as a nefarious plot to dupe Muslims into reading the Bible.
4. Finally, pastors noted that a translator who adopts words from the Qur'an risks leading readers to import their prior understandings to the Bible. In other words, if the Bible calls Jesus Isa, Muslims may associate him with the Qur'an's account, which denies that he died on the cross, for example.
Houssney eventually released a more literal translation.
This reaction, however, raises the question: would the converts based on amended Bible translations be true converts from Islam to Jesus Christ, or mere converts to an Islamic version of Christianity? Are translators diverging from the literal meanings of scripture inadvertently working against the true Gospel of Christ, and becoming unwitting purveyors of "another gospel?"
As the Apostle Paul sternly warned in Galatians 1:9-10: "As we said before, so say I now again, If any man preach any other gospel unto you than that ye have received, let him be accursed. For do I now persuade men, or God? Or do I seek to please men? For if I yet pleased men, I should not be the servant of Christ".