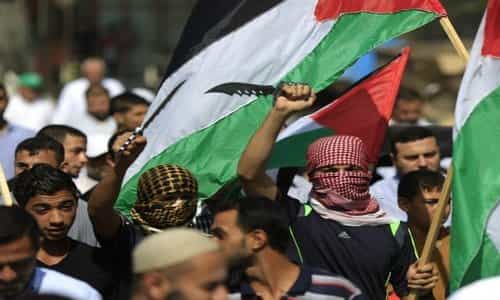 By Bassam Tawil/Gatestone Institute January 15, 2018
Share this article:
What do the Palestinians think about the murder of a young rabbi and father of six? They "welcome" it with open arms.
So what if Rabbi Raziel Shevach was said to have maintained good relations with his Palestinian neighbors?
The Palestinians are still happy that he was gunned down last week as he was driving his car in the northern West Bank. They are happy because the victim was a Jew. They are happy because the victim held a religious position: Rabbi. They are happy because the victim was a "settler."
The fact that Rabbi Shevach was the father of six children does not faze the Palestinians one bit.
For them, what is important is that another Jew has been murdered. This meant, for the Palestinians, that his presence in the West Bank also carried religious weight. A rabbi living in the West Bank is emblematic of Jews' historic and religious attachment to the land.

For all those reasons, the Palestinians are happy about the murder. Notably, the rabbi's political affiliation is irrelevant. He could be from the most extreme left-wing or right-wing party in Israel – this still would not make any difference. Rabbi Shevach was not murdered because of his political views.
The Palestinian Authority and its leader, Mahmoud Abbas, have thus far refused to condemn the murder. Abbas has been quick to condemn terror attacks around the world, from Russia to France, Germany, Turkey and Egypt. When it comes to the murder of Jews by Palestinian terrorists, however, Abbas and his aides are quick to go into hiding.
Yet, in their world, the failure of Abbas and the Palestinian Authority to condemn the murder of the rabbi makes sense. They cannot do so because they themselves have been inciting their people against Israel and Jews for decades. In the past few weeks, the anti-Israel incitement has even intensified due to U.S. President Donald Trump's announcement recognizing Jerusalem as Israel's capital.
Abbas fears that if he condemns the murder of the rabbi, his people will turn against him and accuse him of being a traitor and of "selling out" to the Jews.That view partially accounts for why leaders such as Abbas remain silent before the ruthless killing of a Jewish father of six. Fear, however, is only one reason; there is another, deeper one: Abbas and his senior officials actually rejoice in the news of this atrocity.
Here is where it gets tricky: Abbas and the Palestinian Authority cannot express their true feelings in public. That admission would jeopardize international aid lose them the sympathy of many in the international community. It would strip their masks and show them as the terror supporters and anti-Semites they truly are.

Until a few years ago, Abbas and the Palestinian Authority would issue laconic and ambiguous communiqués denouncing "all forms of violence, regardless of the identity of the perpetrators or victims." This was done merely for public consumption, to appease American and European donors.
Now, the tide has turned. The Palestinians do not even feel the need to condemn terror attacks against Jews, because the international community is no longer demanding that they come out against terrorism.
The message that the Palestinian Authority leadership is now sending to its people is that the murder of Rabbi Shevach is a "heroic" attack that brings "pride" to all Palestinians. Instead of condemning the murder, the Palestinian Authority has been condemning Israel for launching a manhunt for the terrorists and imposing strict security measures around some Palestinian communities in the aftermath of the murder.
The tone on Palestine TV and Palestine Radio (both of which are controlled by Abbas) has been one of joy over the murder of the rabbi.
Abbas not only no longer feels the need to condemn the murder of the rabbi, he also seems outraged by U.S. officials who dared to call him out on his failure to condemn terrorism.
After the murder, U.S. special envoy Jason Greenblatt and U.S. Ambassador to Israel David Friedman had the "audacity" to criticize the Palestinians for incitement and rejoicing over terrorism. What was Abbas's response to this criticism? He sent Osama Qawassmeh, a Fatah spokesman, to launch a scathing attack on Greenblatt and Friedman, and accuse them of sharing the views of right-wing extremists in Israel.
"Greenblatt and Friedman only see things through Israeli eyes," Qawassmeh charged. "They don't see the Israeli crimes or violations of international law."

This Palestinian response is meant to accuse the two U.S. envoys of being Israeli "agents," as if to ask: "How dare you criticize us?" This represents a new degree of Palestinian arrogance; they are not used to hearing any form of criticism from foreign governments, and certainly not from the Obama administration.
For Abbas and many Palestinians, any U.S. official who dares to criticize the Palestinians must be on the payroll of the Jewish lobby or in collusion with the Israeli government and the Zionists.
What the Palestinians are saying is that when they celebrate murder and terrorism, they expect to be considered immune to criticism. The Palestinians want the Trump administration to return to the Obama administration's policy of scapegoating Israel and turning a blind eye to Palestinian incitement and terrorism.
The Palestinians object to interference in their terror party. They wish to continue, unimpeded, the handing out of candies on the streets each time a Jew is murdered. They wish to celebrate each and every death of an American, as they did with the celebrations that swept the West Bank and Gaza Strip after 9/11.
Now, the Palestinians are celebrating the murder of Rabbi Shevach and they do not want anyone to spoil the festivities -- not Trump and not any of his emissaries.
Why do the Palestinians not want anyone to call them out? Because they are planning more killings, more terrorism, in the form of a new intifada. They are hoping that the rabbi's murder will help trigger a new holy war to destroy Israel. Just one problem marred the recent murder: Only one Jew was killed. Yet, even one killing offers Palestinians "hope" for pursuing the murderous campaign against Israel and Jews.
"The Palestinian people have not been as happy [in a long time] as they were after the killing of the rabbi," said Palestinian columnist Ibrahim Al-Madhoun. "True, the operation did not result in the death of several Israelis, but only one settler. However, it gave momentum to the effort to revive and escalate the intifada (against Israel)."
Some Palestinians should be given credit for being more honest than their leaders about their true goals.
Originally published at Gatestone Institute - republished with permission.