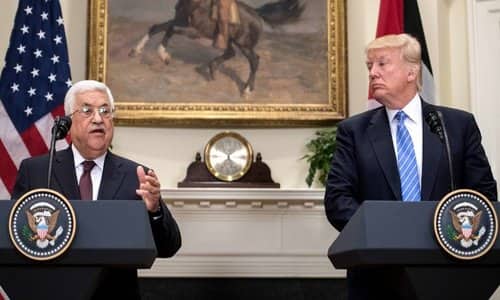 By Jonathan S. Tobin/JNS.org January 21, 2018
Share this article:
Those who care about the Jewish state know that the Israeli people ardently desire achieving a lasting and true peace. But the pursuit of that noble aspiration has during the course of the last 25 years been largely based on a delusion.
It has always been a matter of wishful thinking, rather than serious analysis, to assume that the Palestine Liberation Organization and the Palestinian Authority (PA) created from it after Oslo are as interested in peace as Israel is.
The world got another reminder of this reality when PA President Mahmoud Abbas gave a speech in which he not only rejected any further negotiations with the U.S. and Israel, but also engaged in a wild anti-Semitic rant denying Jewish history and making it clear he had no desire for peace.

Yet when faced with this fact, many on the left prefer to focus their anger at a favorite target rather than admit that Abbas, like his predecessor Yasser Arafat, was an opponent of peace rather than a credible negotiating partner.
That's why some in the so-called peace camp prefer to blame Palestinian misbehavior on President Donald Trump rather than own up to the truth about Abbas.
That disconnect between hope and reality has set up a vicious cycle in which negotiations are always undone by the reality of Palestinian politics. While Palestinian rejectionism has been a constant since the signing of the Oslo Accords in 1993, there have been two moments when their actions were so unambiguous that it exposed the peace process as a sham.
One was in 2000, when, after then-Prime Minister Ehud Barak went to Camp David and offered the Palestinians an independent state in almost all of the West Bank, Gaza and a share of Jerusalem. Arafat said no. Within weeks, he began a terrorist war of attrition known as the second intifada that took the lives of more than a thousand Israelis and many more Palestinians.
That war created a broad consensus in Israel in which the vast majority of Israelis came to understand that the Palestinians aren't ready to make peace. But some hoped Arafat's successor would be different. Abbas disappointed those hopes with rejections of more peace offers, refusals to negotiate and inflammatory rhetoric that set off new rounds of violence, such as his assertion that "stinking Jewish feet" should not pollute the holy sites of Jerusalem.

Yet still the peace camp clung to him, and President Barack Obama praised him as a champion of peace.
But no rational person could hear Abbas's January 14 diatribe and still believe he has any interest in two states or coexistence. His complaints were not so much about the U.S. recognition of Jerusalem as Israel's capital as they were about the entire Zionist project.
He denounced Trump but made it clear his real problem was with Arthur James Balfour and the origins of Jewish statehood as well as in denying the historical ties between the Jewish people and their ancient homeland. He vowed to go on supporting terrorism and his violent words confirmed a commitment to incitement.
Yet rather than confront the truth about Abbas, many on the left prefer to blame Trump.
It's true that the president's Jerusalem statement as well as his efforts to pressure the PA to give up terror funding offended the Palestinians. They also resent his willingness to use U.S. aid as leverage to get them to embrace peace.
But nothing he did foreclosed the possibility of two states or even a negotiation in which he would use his leverage to pressure Israel to get the "ultimate deal" he craves. A Palestinian leader who wanted peace would have exploited that opening. Instead, Abbas demonstrated why he didn't take advantage of the eight years when Obama was hammering Israel to make concessions: he isn't interested in deal that will end the conflict on any terms.

Trump didn't make him give that speech. Nor did Israeli Prime Minister Benjamin Netanyahu. But for those who always blame Israel and deny Palestinian intentions, admitting that they've been duped is painful. It's time for the "peace camp" to understand Abbas and the Palestinians just aren't that into them.
To understand that peace isn't possible in the foreseeable future doesn't mean it can't happen eventually, when the political culture that makes Abbas's stand popular is rejected in favor of one rooted in an admission that their failed century-old war on Zionism is over.
But for those who have always blamed Israel and now Trump for the lack of peace, Abbas's speech was a long-overdue reality check. Those who won't accept that have forfeited the respect of fair-minded observers.
Originally published at JNS.org - reposted with permission.