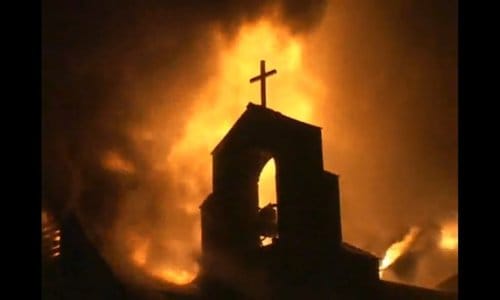 By Tom Olago March 18, 2016
Share this article:
There have been numerous indications that persecution of Christians worldwide continues to grow at an alarming rate. From around the globe, news keeps pouring in of killings, imprisonment, torturing, harassment, rape, discrimination, displacement and evictions of Christians and attempts to close or destroy churches and Christian gatherings of any kind.

Sharia-ruled nations though are by no means the only anti-Christian ones. Countries rooted in socialist cultures are equally culpable in this regard. As Stoyan Zaimov for the Christian Post (CP) recently reported, the Chinese government has decided to go so far as ordaining priests - effectively denying church leaders their rights of office and authority to conduct duties within their vocation.
As Zaimov narrated, the Chinese government has reportedly continued tightening its grip on Christianity, influencing the nation's two government-controlled Catholic organizations to agree to ordain bishops "under the leadership of the government."
According to the International Christian Concern: "China is attempting to control Christianity in two ways; demolishing the Christian image and arresting leaders, and manipulating them through a government run church... Either way, Christianity is facing difficult times in China, but their numbers still grow. That is a testament of the power of the Gospel, not the success of the government and the state."
The crackdown on Christianity has been seen in the forced removal of hundreds of church crosses across several Chinese provinces, and the arrests of underground church pastors  and congregants who have stood against church demolitions.
And even where governments are not complicit in the persecution of Christians, they tend to want to downplay the extent of Christian suffering in favor of a politically correct stance.
A separate CP report noted that in Nigeria persecution watchdog groups, such as International Christian Concern (ICC) have pointed out that much of the violence is aimed at Christians, who make up close to half the nation's population.
Yet, as ICC noted, Nigerian officials are failing to convey this targeting of Christians, evaluating the ongoing attacks more as historical tensions over land rights for cattle grazing versus crop farming.
Despite indications that terror group Boko Harams militants are largely from the Kanuri ethno-cultural group, they have carried out several attacks on villages while disguising themselves as herdsmen. Whats more, some Fulani have admitted during interrogations by police that they are Boko Haram members.
India, according to separate reports, is yet another country where it is becoming harder for Christians to practice their faith in peace, largely due to Hindu resistance. Twenty-five million Indians, or about 2.3 percent of the population, are Christian. Six Indian states prohibit conversion from Hinduism to Christianity, or Islam.
During 2015 in India, according to the Evangelical Fellowship, the following statistics against Christians were recorded: 68 incidents involved physical violence, 36 involved the stopping of services or the damaging of churches, and 18 Christians and pastors were arrested. At least three women reported rape  - including a nun who was raped at her convent. The worst persecution happened in central India in the states of Chhattisgarh and Madhya Pradesh, and in the northern state of Uttar Pradesh.
Is there any indication that the international community is paying any attention to the plight of Christians worldwide who are so openly being persecuted for their faith?  The lack of action so far is hardly due to a lack of awareness, as reporting on the issue has been widespread and a number of Christian organizations have repeatedly raised their voices in loud protest.
There is a small flicker of hope as Secretary of State John Kerry finally announced on March 17 that ISIS' action against Yazidis, Christians and Shiite Muslims in Iraq and Syria constitutes genocide.
This is the first time that the United States has declared a genocide since Darfur in 2004.
The House of Representatives also unanimously passed a resolution labeling the ISIS atrocities against Christian groups in Syria and Iraq "genocide," a term the State Department had been reluctant to use about the attacks and mass murders by the terror group.
However, the genocide finding does not legally obligate the U.S. to take any particular action and many analysts doubt Obama is looking to take a more active role in the region with his term starting to wind down.
So what way forward for the persecuted church? Certainly Christians need to pray for and support the persecuted among them, locally and all around the world, in every possible way. But one may wonder what hope there is for Christians long-term survival given the rate and ferocity with which they are being fought, virtually everywhere and on all fronts.
But as Jesus Christ Himself so aptly stated of His church:  The gates of hell shall not prevail against it(Matthew 16:18).