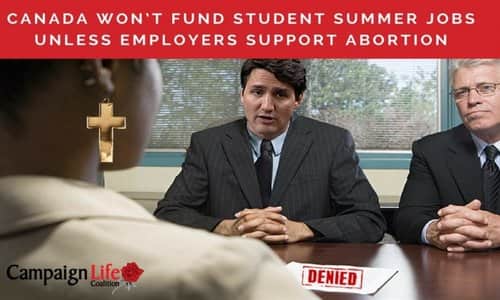 By PNW Staff January 26, 2018
Share this article:
Those with a conservative and evangelical leaning often agree that the act of abortion and living a gay lifestyle is morally wrong. For many, this is based on God's Word the Bible where the scriptures talk about the sanctity of life and the negative implications of alternative lifestyles on numerous occasions.
Unfortunately, not everyone agrees with this truth. Some of those who disagree are making their voices heard within the Canadian government.  According to recent reports out of Canada, not only is the federal government not pro-life or pro-traditional marriage, but they are actually making it harder for those who are to find and pay employees. Read on to learn more:
The Job Program is In the Crosshair of The Controversy
The job program in the crosshair of the Canadian controversy is the summer job programs funded by government grants. It is officially called the Canada Summer Jobs Program. The problem many on the right have with this program has nothing to do with the jobs it subsidizes.

Instead, it’s the requirement Prime Minister Justin Trudeau’s liberal government has placed on businesses who wish to receive funding for summer work as part of said program.
The Unfair Requirements Placed on Canadian Businesses
Justin Trudeau’s Liberal government changed the application process for Canada Summer Jobs after vowing last year to stop pro-life groups from receiving grants through the federal program.
Employment Minister Patty Hajdu added the requirement that employers sign an attestation that their “core mandate” supports reproductive and transgender “rights.”
Online applicants must check off the attestation or the application is void.
What This Means in Real World Terms
According to Brad Trost, a conservative MP, this is blatant discrimination against people of faith:
"In practical terms, this means you have to be with the Liberal Party position on abortion, gay marriage, transgendered rights, all sorts of legislation in the House of Commons, otherwise, you will be an ineligible employer for this program. That's wrong. That's discrimination."
He goes on to point out an additional problem with the new regulations:

"The second problem with this is it automatically excludes all faith-based organizations that are traditional on their values of human life and sexual morality. That includes millions and millions of Canadians."
There Are Many More Who Also Dislike The Changes
It isn't just Trost who is sounding the alarm about this new legislation. Ontario MP Bev Shipley also expressed disagreement with the changes,
"Many organizations depend heavily on our Canada Summer Jobs funding to run their summer programs and their seasonal businesses. Students are going to lose out on opportunities for employment or experience. This new requirement will directly affect all program applicants who have a different core value than the Trudeau government."
Canada's Summer Job Program Only The Beginning
This blurring of Liberal beliefs with government operations isn't limited to summer jobs. The Trudeau government recently created a $400-million venture capital fund that similarly requires firms to declare their commitment to "gender balance" before they can access any money.
The Trudeau government has also banned activities and projects that don’t support "reproductive" or transgender rights from getting funds from Canada Service Corp, the youth volunteer program.
This mindset, that If you don't agree with the Liberal view of the world, you aren't eligible for government benefits. It is almost a communist mindset.
What's next? Will old age payments and unemployment benefits soon be subject to Liberal value loyalty oaths as well?
What This Means For American Conservatives
The lesson to take from what's going on in Canada is never to allow a government to assume such  control. When they have too much power, they are able to make large, sweeping decisions like this one in Canada that can negatively impact the way of life for many people.

Just look at the abortion and gay right's issues in America as another example of government overreach. Well known Conservative commentator Al Mohler had this warning on the issue:
"The most troubling part of the Prime Minister's statement in recent days was his elimination of a pro-life position as having any place whatsoever in Canada's public conversation. Furthermore with a student jobs program, he has indicated his own willingness and the willingness of his government to use government coercion in order to make this point. ...
This should remind Christians of the argument made by New York Times columnist Frank Bruni just a couple of years ago when he argued that religious liberty when especially it comes to an issue like the morality of homosexuality would protect the rights of American citizens to hold those beliefs in their hearts and in their homes and in their pews but not in public. Now you have the Canadian Prime Minister making a very similar argument but applied to the question of abortion.
And we should note that a New York Times columnist has the power to influence and make an argument, but the Canadian prime minister has the authority and political power to create policies that would bind the Canadian people".
Our neighbors to the north are quickly having their freedom to publicly express views that contradict the government taken away. It's time to value the freedom of speech we have been given and to make sure similar policies are never passed here.