April 2016: The Temple Of Baal Will Be Erected In Times Square In New York City 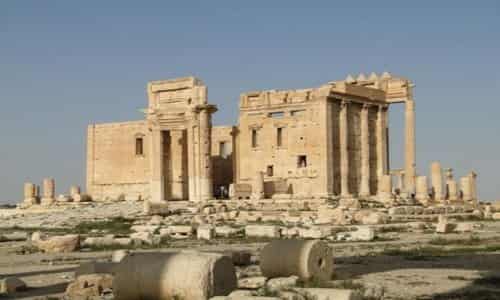 By Michael Snyder - End Of The American Dream Blog March 24, 2016
Share this article:
I realize that the headline of this article sounds like it must be false, but it is actually completely true.

The Temple of Baal (also known as the Temple of Bel) was a world famous landmark that was located in Palmyra, Syria.  In August 2015, this temple was destroyed by ISIS, and most of the world recoiled in terror at the loss of a "cultural heritage site".
In an attempt to "preserve history", two exact replicas of the 50 foot arch that stood at the entrance to the temple will be erected in April 2016 in Times Square in New York City and in Trafalgar Square in London.  Needless to say, a lot of people are quite disturbed by this.  In ancient times, child sacrifice and bisexual orgies were common practices at the altars of Baal, and now we are putting up a monument of worship to this false god in the heart of our most important city.
When I first came across this story, I could hardly believe it.  But this is not just some Internet rumor.  This was reported by the New York Times&
Next month, the Temple of Baal will come to Times Square. Reproductions of the 50-foot arch that formed the temple's entrance are to be installed in New York and in London, a tribute to the 2,000-year-old structure that the Islamic State destroyed last year in the Syrian town of Palmyra. The group's rampage through Palmyra, a city that reached its peak in the second and third century A.D., enraged the world, spurring scholars and conservationists into action. Numerous nongovernmental organizations are now cataloging and mapping damaged cultural heritage sites in the region.
Of course most non-religious Americans dont understand who Baal was, nor do they really care.
But the truth is that many of the elements of ancient Baal worship are being mirrored in our society in 2016.  The following is an excerpt from an excellent article by Matt Barber&
Ritualistic Baal worship, in sum, looked a little like this: Adults would gather around the altar of Baal. Infants would then be burned alive as a sacrificial offering to the deity. Amid horrific screams and the stench of charred human flesh, congregants  men and women alike  would engage in bisexual orgies. The ritual of convenience was intended to produce economic prosperity by prompting Baal to bring rain for the fertility of "mother earth."
The natural consequences of such behavior  pregnancy and childbirth  and the associated financial burdens of unplanned parenthood were easily offset. One could either choose to engage in homosexual conduct or  with child sacrifice available on demand  could simply take part in another fertility ceremony to terminate the unwanted child.
Modern liberalism deviates little from its ancient predecessor. While its macabre rituals have been sanitized with flowery and euphemistic terms of art, its core tenets and practices remain eerily similar.
So considering the child sacrifice and sexual immorality that we are engaged in today, perhaps it is only natural for us to have a Temple of Baal in Times Square.
In the ancient world, the names Baal and Bel were often interchangeable, and they both trace back to the ancient Babylonian god Marduk.  The following comes from Wikipedia&
Bel became especially used of the Babylonian god Marduk and when found in Assyrian and neo-Babylonian personal names or mentioned in inscriptions in a Mesopotamian context it can usually be taken as referring to Marduk and no other god. Similarly Belit without some disambiguation mostly refers to Bel Marduks spouse Sarpanit. However Marduk's mother, the Sumerian goddess called Ninhursag, Damkina, Ninmah and other names in Sumerian, was often known as Belit-ili Lady of the Gods in Akkadian.
According to research published by Bruce W. Warren and John A. Tvedtnes, Marduk was "a huntergod" that was believed to have been the founder of ancient Babylon according to ancient Babylonian tradition...
The Akkadian name Marduk derives front the Sumerian MAR.UTU, a huntergod. He is said to have led a revolt of the gods against his parents, after which he was enthroned as king of the gods. In Babylonian tradition, it was he who founded Babylon (Babilu, gate of the gods). His temple at Babylon bore the name E.SAGILA, house that lifts up the head, and the tower associated with it was called, in Sumerian Etemenanki, house of the foundation of heaven and earth. The similarity to the tower of Babel is evident.

If you are familiar with the book of Genesis, this should remind you of Genesis 10:9 where we are told that Nimrod was "a mighty hunter before the Lord".  And ancient Jewish tradition specifically identifies Nimrod as the one that constructed the Tower of Babel.  In addition to Marduk, other names from the ancient world that are linked with Nimrod include Ninurta, Gilgamesh, Osiris, Dionysus, Apollo, Narmer and Enmerkar.  I know that this can get very confusing.  In the following excerpt, Peter Goodgame helps us to connect some of the dots...
In Part Eight of this study we examined evidence that Nimrod was known in Egypt as King Narmer, who was later deified as the god Osiris, the Lord of the Underworld. In Part Five we looked at evidence that Nimrod was known to the ancient Sumerians as the great King Enmerkar who attempted to build a huge tower to the gods in the ancient city of Eridua city referred to as the original Babylon by the historian Berossos.[1] Traditionally the Tower of Babel event has been associated with Nimrod, and Jewish commentaries as well as the Jewish historian Josephus both seem very emphatic on this point. Regarding the Sumerian name Enmer-kar, the suffix "kar" means "hunter,"  and so "Enmer-kar" is in fact "Enmer the Hunter," just as Nimrod is referred to as the "Mighty Hunter" in Genesis 10.
Furthermore, Enmerkar is named on the Sumerian King List as "the one who built Uruk," just as Nimrod is described in Genesis 10:10 as having a kingdom that began in "Babel (Eridu) and Erech (Uruk)... in the land of Shinar." After Enmerkars death he became honored in Sumerian myth as the semi-divine hero Ninurta, and eventually this cult evolved into the great cult of Marduk, which became the state religion of Babylon after the conquests and religious innovations of Hammurabi.
According to some traditions, the original Freemason was Nimrod.  He created the very first "New World Order" in the post-flood world, and virtually all of the major gods of ancient Babylon, Greece and Rome ultimately trace back to him or traditions surrounding him.
But for many modern occultists, the story of Nimrod is far from done.  A lot of secret societies and occult groups have traditions that tell them that Nimrod/Marduk/Osiris/Apollo/Baal will someday be resurrected and will once again rule the world.
And many Bible scholars believe that the coming Antichrist will either be a resurrected Nimrod or will be associated with him in some way.
With all of the preceding in mind, could it be possible that we are actually erecting a temple for the Antichrist in New York City next month?
If you are not religious, I know that all of this must sound very strange.  But there are occultists that take this stuff deadly seriously, and nothing this large gets space in either Times Square or Trafalgar Square by accident.
There are very powerful people out there that made this happen, and perhaps someone should ask them what their intentions are.