The Hamas Gimmick That Failed 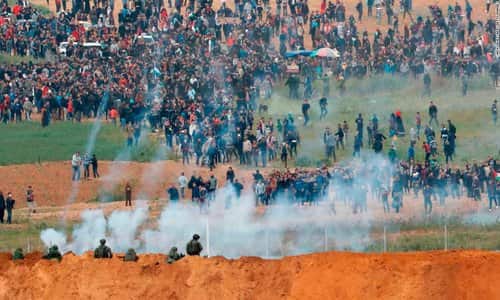 By Yoni Ben Menachem / JNS.org April 12, 2018
Share this article:
The recent Hamas "Friday of Tires" protest failed to achieve its main objective -- which was to impede the actions of IDF marksmen on Israel's border with the Gaza Strip.
The Palestinians did not manage to infiltrate Israeli territory, and the Israeli deterrent was preserved.
The Palestinian "return" campaign has also failed to mobilize Arab states and the West Bank. But there is still a month ahead for the campaign to run, culminating in Nakba Day on May 14 and 15, the scheduled dates of the transfer of the US embassy to Jerusalem, and the Palestinian commemoration of the Nakba. And on May 15, the month-long fast of Ramadan, which is sacred to Muslims, is set to begin.

According to official statistics released by the Palestinian Health Ministry, at lest 10 Palestinians were killed during the "Friday of Tires" in Gaza. Around 1,400 were injured, 33 of whom were in serious condition.
The second week of the "return" campaign organized by Hamas ended in failure, according to IDF estimations, which the Palestinians do not deny. Only around 20,000 people took part in these events, compared to 40,000 people who participated during the previous week.
Why is this a failure?
In fact, the first Friday of the campaign (March 30) was originally declared a memorial day for those who were killed on what was termed "Land Day" in 1976. However, this date has gradually become the "Friday of Tires."
The Hamas leadership, who did not want to lose too many participants at its events, gave into pressure from the younger generation in Gaza -- who brought up the idea of the old-new gimmick of burning thousands of tires, They wanted to use the tactic to hinder the actions of IDF marksmen across the border, thereby "protecting the lives of the protesters."
According to Fatah sources in Gaza, the Hamas leadership believed that this new gimmick would succeed following the failure of the underground tunnels project.
Burning tires is not new. This tactic first appeared during the civil war in Lebanon from 1975-1990, and it was also used extensively during the First Intifada in 1987, and the Second Intifada in 2000.
Using thousands of burning tires was intended to draw the IDF to a new front, where it would have to deal with thousands of protesting civilians in conditions of poor visibility, which would cause it to make mistakes.
However, an assessment of the results shows that the purpose for which thousands of tires were burned was not achieved. The IDF forces at the Gaza border were prepared in advance. Whenever necessary, they used water cannons, fans, and fire hoses to disburse the flames, and they also used aerial drones to overcome the heavy smokescreen.

Anyone who attempted to approach the border fence, damage it, cross it, or carry out terror attacks under cover of the smoke from the tires was hit by sniper fire.
The Palestinians did not manage to infiltrate the territory of Israel in their vast numbers, and the Israeli deterrent was preserved.
From the view of Hamas, the campaign was an operational failure. The movement's consent to use thousands of burning tires diverted the "return" campaign from its original objective. Also around the world, it is obvious that there is no connection between burning tires and the "right of return" for refugees. There were no great marches toward the border fence -- only a massive burning of tires.
Hamas, which is well aware of the murmurings and mood on the Gaza street,  tried to boost participation in the events of the "Friday of Tires" by promising financial incentives to those who took part, and to those who were injured in the events of the most recent "Land Day."
Hamas announced, through its spokesmen, that the families of those killed in the "return" campaign would receive the sum of $3,000, while anyone seriously injured would get $500, and anyone sustaining moderate injuries would be given $200.
** Sponsored Link **
What are the best gaming mice for newer computer games?  Several new brands can be found at www.thegadgetnerds.com including performance reviews. **
At the same time, they announced $1 million would be distributed among needy families in the Gaza Strip, including the homeless and divorced women.
Fatah in Gaza considers Hamas' promise of financial incentives to the demonstrators to be an attempt to encourage the culture of "martyrdom" (shahada in Arabic) for the sake of monetary gain and the exploitation of the suffering of civilians caused by the humanitarian crisis.
There have been calls among other Palestinian factions for Hamas to establish a "national committee" that would include all parties, and this committee would then determine which of those injured during these events were entitled to a financial payment.

Using Yasser Arafat as a symbol
One of the surprises of the "Friday of Tires" was a statement made by Yahya Sinwar, the leader of Hamas in Gaza.
Sinwar only arrived in the area in the afternoon, and in the speech he delivered to the demonstrators, he said: "We are continuing the path of Yasser Arafat, of tipping the scales and resisting the enemy."
Sinwar's words surprised the residents of Gaza, because he deliberately avoided mentioning his teacher and mentor Sheikh Ahmed Yassin, the founder of the Hamas movement. Sinwar was very close to Sheikh Yassin, who, when he founded Hamas in 1987, appointed him as the head of the security bureau known as the "Majd."
Fatah elements in Gaza say that the omission was not an error, and that Sinwar's words reveal the troubles of the "return campaign," which has gradually lost many participants. They claim that Sinwar used Yasser Arafat as a symbol to encourage Fatah activists to take part in the "return campaign," especially the many supporters of Mohammed Dahlan in the Gaza Strip.
Mohammed Dahlan often claims that he, rather than PA Chairman Mahmoud Abbas, is continuing the true path of Yasser Arafat.
Failure in the Arab states and the West Bank
After two weeks of the "return" campaign, it is apparent that the Gaza Strip remains isolated with regard to anything to do with this campaign.
According to the original plan, marches toward the border with Israel were supposed to take place in the various Arab states where there are Palestinian refugee camps at the same time as the demonstrations in the Gaza Strip.
Apart from an attempt to create such a parade in southern Lebanon on Land Day on March 30, 2018, this appeal from Hamas did not garner any response. Even in southern Lebanon, the Lebanese army did not allow the demonstrators to reach the border with Israel.
The lack of response to the "return" campaign in the West Bank was particularly apparent. This was due to several reasons:
The residents don't believe in the success of the campaign. The strategy of Hamas is similar to that of Mahmoud Abbas, which called for "popular resistance in peaceful ways." This has been a resounding failure in the West Bank.
Mahmoud Abbas fears that if mass "return marches" are permitted in the West Bank, this may strengthen Hamas and threaten the stability of his regime.
PA security cooperation with Israel obligates the Palestinian Authority to maintain order and prevent clashes with IDF forces.
Fatah in the West Bank does not actively support the "return" campaign, providing declarations only.
It is too early to lay the Hamas "return" campaign to rest. The most outstanding achievement of the campaign until now is the restoration of the Palestinian problem to the international agenda.
Nevertheless, so far the Palestinians have failed in their demand for the UN Security Council to condemn Israel, announce the establishment of an investigative committee, or get the United Nations to pass a resolution to provide an international defense force for the Palestinians, as demanded by the Palestinian Authority.
An additional achievement is creating obstacles for the Trump administration to publicize its new peace plan. Mahmoud Abbas also has a problem: it is difficult for him to impose new sanctions on Gaza while its residents are battling IDF forces at the border fence.
The Hamas movement is highlighting the claim that the "return campaign" has embarrassed Israel in the international arena, and this is of great concern to Israel's political and defense establishment.
Noteworthy dates ahead
A few more notable dates lie ahead.  On April 15, an Arab summit meets in Saudi Arabia, and April 17 has been proclaimed "Palestinian Prisoner Day." These are in addition to Fridays, which have been proclaimed "Days of Rage" on a regular basis.
It is reasonable to assume that the organizers of the "Return" campaign will try to stir things up on the border between Gaza and Israel on these particular days.
The height of the campaign is supposed to be on May 14 and 15, the scheduled dates of the transfer of the US embassy to Jerusalem and Nakba Day.
Originally published at JNS.org - reposted with permission.